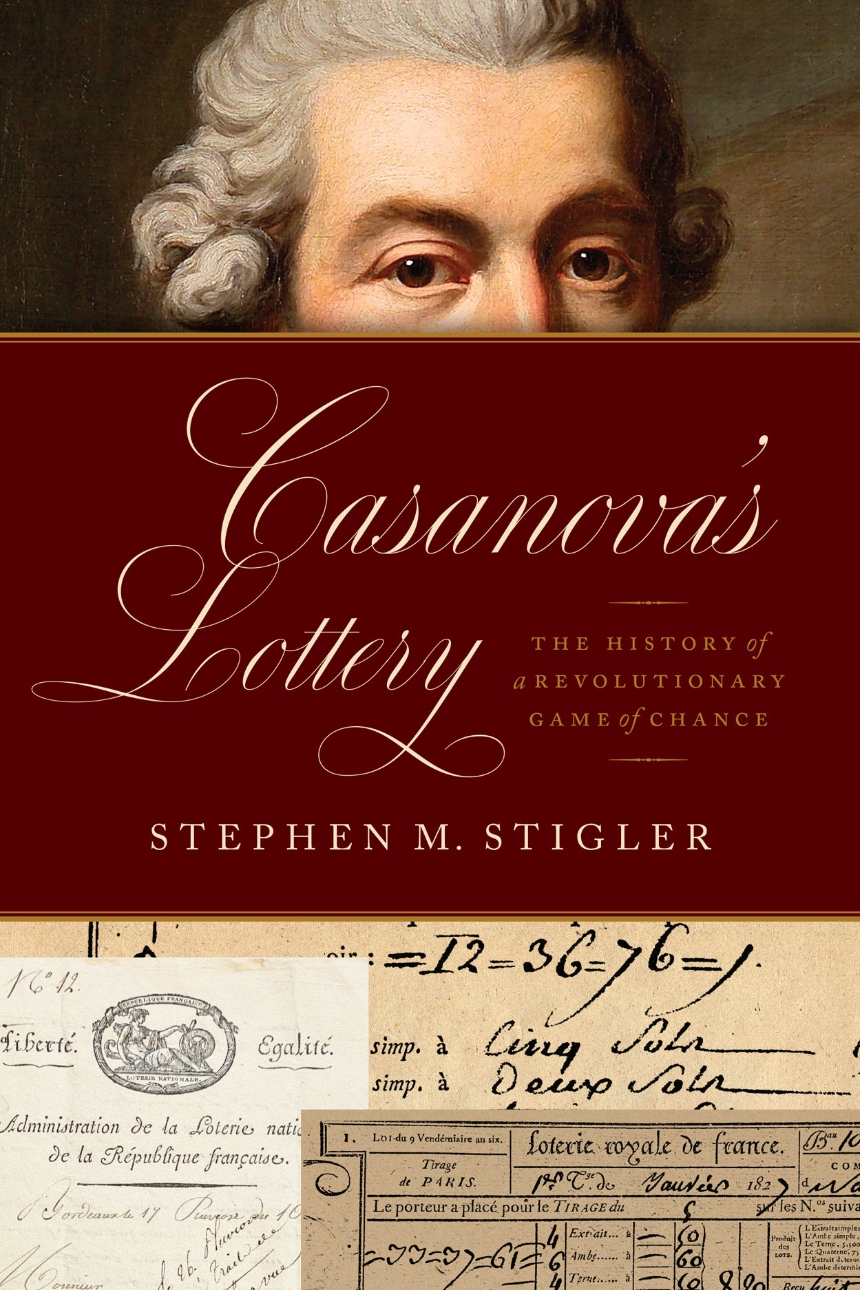 The History of a Revolutionary Game of Chance

The History of a Revolutionary Game of Chance

The fascinating story of an important lottery that flourished in France from 1757 to 1836 and its role in transforming our understanding of the nature of risk.

In the 1750s, at the urging of famed adventurer Giacomo Casanova, the French state began to embrace risk in adopting a new Loterie. The prize amounts paid varied, depending on the number of tickets bought and the amount of the bet, as determined by each individual bettor. The state could lose money on any individual Loterie drawing while being statistically guaranteed to come out on top in the long run. In adopting this framework, the French state took on risk in a way no other has, before or after. At each drawing the state was at risk of losing a large amount; what is more, that risk was precisely calculable, generally well understood, and yet taken on by the state with little more than a mathematical theory to protect it.

Stephen M. Stigler follows the Loterie from its curious inception through its hiatus during the French Revolution, its renewal and expansion in 1797, and finally to its suppression in 1836, examining throughout the wider question of how members of the public came to trust in new financial technologies and believe in their value. Drawing from an extensive collection of rare ephemera, Stigler pieces together the Loterie’s remarkable inner workings, as well as its implications for the nature of risk and the role of lotteries in social life over the period 1700–1950.

Both a fun read and fodder for many fields, Casanova's Lottery shines new light on the conscious introduction of risk into the management of a nation-state and the rationality of playing unfair games.

"Stigler draws on a particularly fascinating historical case study, about which he has incredibly deep knowledge and which he is able to transmit in meticulous detail and in delightfully lucid prose. The writing is absolutely clear and readable—a wonderful example of the possibility of writing about serious scholarly matters in a way that invites the reader along and allows the reader to share in the author's expertise, rather than either excluding the non-expert reader or talking down. It's remarkable how accessible Stigler makes the technical material on probability and statistics, again without any simplifications that would take away from the seriousness of the treatment. This is truly an unusually well-written book."

Justin E. H. Smith, author of The Internet Is Not What You Think It Is

"Stigler is unrivaled in his ability to elaborate subtle points of probability and statistics for broad audiences and to integrate discussion of these technical concepts with lively narrative and historical analysis. He masterfully integrates the practicalities of betting strategy and lottery administration with higher-level intellectual debates about risk, probability, and the ethics of gambling. Entertaining and highly informative."

Introduction
One
Casanova
Two
The Genoese Lottery
Three
The Establishment of the Loterie
Four
Problems and Adjustments in the Early Drawings
Five
Antoine Blanquet and the Great Expansion of 1776
Six
The Introduction of Bonus Numbers: Les Primes Gratuites
Seven
The Spread of the Loterie in Europe
Eight
Data Security: The Design of the Tickets
Nine
The Loterie and the Revolution
Ten
Was the Loterie Fair?
Eleven
Dreams and Astrology: The Bettors and the Loterie
Twelve
The Number 45 and the Maturity of Chances
Thirteen
How Much Did They Bet, and Where?
Fourteen
Muskets, Fine-Tuned Risk, and Voltaire
Fifteen
The Loterie in Textbooks and Manuals
Sixteen
The Suppression of the Loterie in 1836
Conclusion
Acknowledgments
Appendix 1. Probability
Appendix 2. Laplace’s Lottery Theorem
References
Index
Excerpt

This is the history of an unusual lottery, one that flourished in France from 1758 until 1836 with a three-year hiatus during the French Revolution. It certainly was not the first state lottery: the modern history of state lotteries goes back at least to the sixteenth century. Nor was it the first based upon the same plan for carrying out the drawing, a plan that was an ancestor of modern lotto and was introduced in the seventeenth century on a small scale in a few Italian cities. But this lottery was unique in one intriguing aspect: In adopting its framework, the French state took on risk in a way no other state lottery has done, before or since. At each drawing, the state was at risk of losing a large amount; what is more, that risk was precisely calculable, generally well understood, and yet taken on by the state with little more than a mathematical theory to protect it. At its peak, it provided up to 4 percent of the French national income.

France by the 1750s was familiar with financial innovation. The sixty-four-year reign of the “Sun King,” Louis XIV of France, ended with his death in 1715. His was the longest reign in European history, and he left a treasury that was essentially bankrupt, principally due to debts accumulated in a long series of wars. The French economy, predominantly agricultural, was doing well, but the nearly panicked Finance Ministry could not find much solace in that, and this led to financial experimentation and one of the most improbable careers in history.

John Law was born in Scotland in 1671. By 1694 he was living in London, where he killed a man in a duel with swords over a woman’s affection, and was sentenced to death. But he managed first to get out on appeal and later to escape and flee to the continent, where he traveled between Amsterdam and Paris, and by 1715 caught the ear of the Duke of Orléans. The duke became the regent of France at the death of Louis XIV and was central to the Finance Ministry, and he was receptive to a plan Law had been pushing: a managed currency based on instruments of credit rather than stocks of precious metals. In effect, Law invented the basis for most nations’ currency of the present day, but in his case it was based upon volatile investments involving North American fur trade and land contracts, the beginning of what came to be called the “Mississippi Bubble.” At first it went well: from 1715 to 1720 he founded the Banque générale, which then became the National Bank. By 1720 he was the French controller-general of finances (essentially the prime minister), and he became the wealthiest man in the world, at one time or another owning twenty-one estates in France. But the volatility, and a few unwise actions in coping with it, undermined public confidence. The swings in value of the Mississippi shares were mild in comparison to those that would come with the later currency “assignats” introduced by the Revolutionary government in 1790. Unlike the assignats, Law’s new currency never became valueless, but confidence in it was shaken to the point where the currency was eventually returned to a base in gold and silver. The episode brought ruin to many people in the already stressed French and British economies. Law was pushed out of his appointment, and left France. After a few more adventures, he died in Venice in 1729.

The French treasury recovered, but the episode left conflicting lessons. It opened eyes to the possibility of financial experimentation, and it alerted the ministers to the high risks and potential costs involved with such experimentation. As would be expected in human affairs, these lessons were heeded, but not for long. Within a decade of John Law’s departure, a peculiar scheme was devised with the aim of eliminating some of the accumulated debt, but with a defect in conception that allowed the French philosopher Voltaire and the French explorer-mathematician La Condamine to make millions of francs with essentially no risk. This and many other such projects involved lotteries; most of these were a variation on a plan that may have originated in the Netherlands in the 1400s.

Those state lotteries were set up as raffles. A large number of tickets were to be sold, and a fraction of the proceeds—often at least a half—would be set aside for the state, with the remainder allocated as prizes. A drawing would be held, tickets would be picked in an apparently random way, and the prizes given in different amounts to the winners. That scheme was attractive to the state because once the tickets were sold, the state was guaranteed to make a profit. But that certainty was illusory. The ticket buyers were not given any guarantee, and the sale could be a hard sell indeed. It might take years to sell the tickets, and the sale might never be completed, leading the state to retrospectively change the rules and lower the payout: a practice that not only generated rebellious ill will but also made the launching of a second lottery a nearly impossible task. In 1567, Queen Elizabeth of England, through her ministers, announced a lottery to help support her navy. A total of 400,000 tickets were to be sold for ten shillings each, gaining a net profit of £100,000 for the Crown. But after two years, less than a tenth of the tickets had been sold. The lottery was held with prizes proportionately reduced, and with the gain to the Crown eaten up by expenses. On paper, there was no way such lotteries could lose money; in practice they were cumbersome in administration, and could take months or years to complete. And if the sales failed, so did the lottery and the reputation of the state.
The new French plan instituted in 1758 was based upon an earlier lottery believed to have originated in Genoa. The “Genoese” lottery had significant advantages. It could be offered frequently: at one time in France, there were fifteen drawings a month. It could scale up geographically: at one time there were more than a thousand offices in France alone. It allowed the clientele to shape their own bets, to take on as much or as little risk as they wished. But it also presented new and difficult challenges.

The raffles lotteries had the comfort of knowing that the number of winners was strictly limited, and that the policing of awards was relatively easy. Indeed, they did not need to worry greatly if the prize went to the right person; they paid out the same amount whether the award was accurately given or not. With the French Loterie (I will call it by its French name, to distinguish it from other species), the number of winners was unknown in advance since many people could hold bets on the same numbers, perhaps yielding many winners of the largest prizes. The opportunity for fraud was immense, either through counterfeited tickets or through crooked agents selling tickets after the drawing was announced. The administrative burdens were correspondingly immense: all of this oversight was needed everywhere, in a system of a thousand offices at one time, spread over an empire. The French at that time tended to “farm out”—— or “outsource,” in modern terminology—the administration of other tax-generating efforts, but not so with the Loterie. Apparently the risks were such that closer control was deemed necessary.

The response to these challenges was the development of novel schemes for what we now call data security, some of which bear uncanny resemblance to schemes employed in the Internet age. There were also innovations in bookkeeping that went far beyond the simple “double entry” that had been introduced in the 1400s, where two entries—assets and liabilities—gave a simple check in sums; the Loterie officials needed full accuracy in every entry of a bet, with links to the bettor’s name. Admittedly, they also had, and used, some deterrents we do not employ today, such as the dungeon.