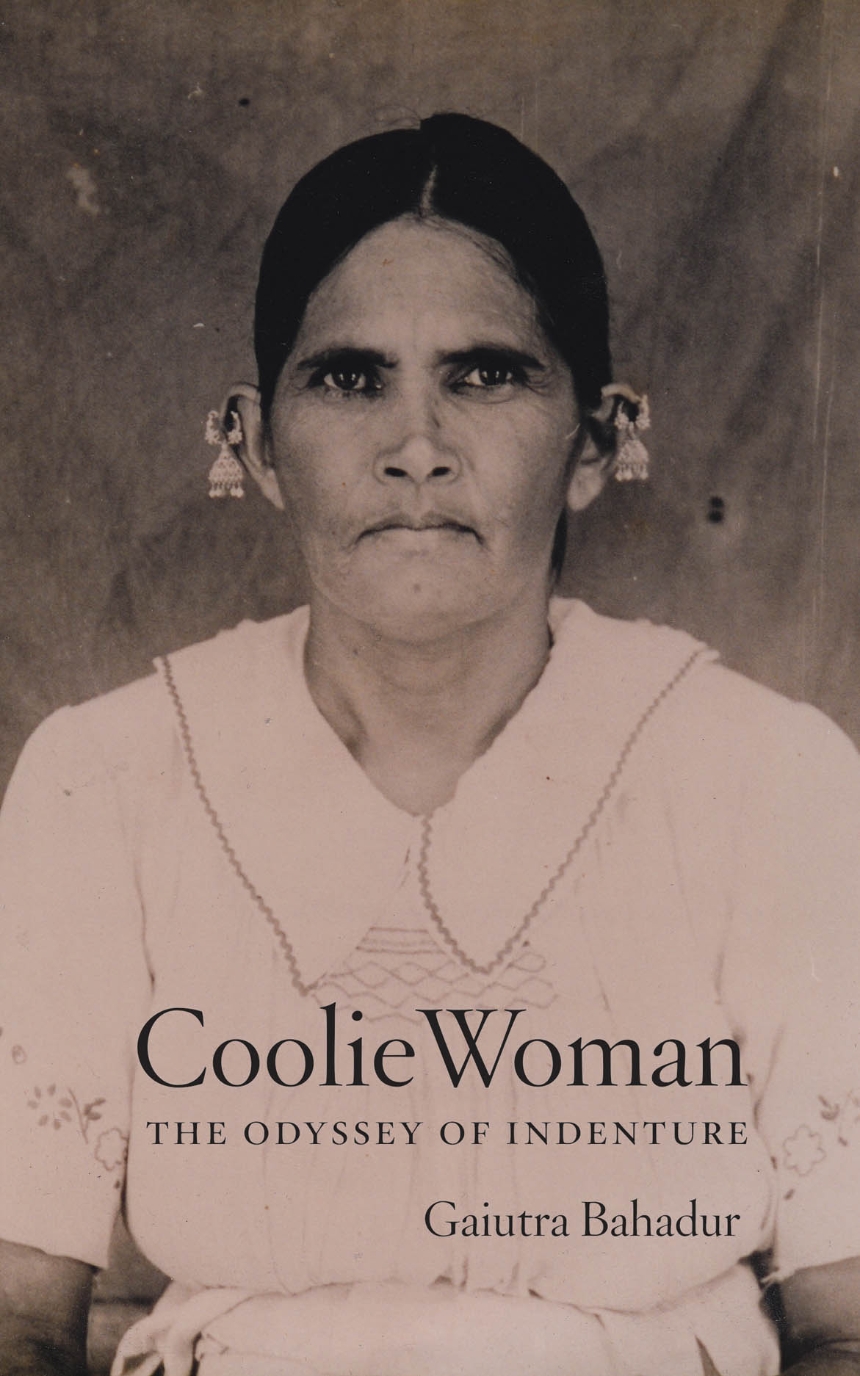 The Odyssey of Indenture

The Odyssey of Indenture

In 1903, a young woman sailed from India to Guiana as a “coolie”—the British name for indentured laborers who replaced the newly emancipated slaves on sugar plantations all around the world. Pregnant and traveling alone, this woman, like so many coolies, disappeared into history. In Coolie Woman—shortlisted for the 2014 Orwell Prize—her great-granddaughter Gaiutra Bahadur embarks on a journey into the past to find her. Traversing three continents and trawling through countless colonial archives, Bahadur excavates not only her great-grandmother’s story but also the repressed history of some quarter of a million other coolie women, shining a light on their complex lives.
Shunned by society, and sometimes in mortal danger, many coolie women were either runaways, widows, or outcasts. Many of them left husbands and families behind to migrate alone in epic sea voyages—traumatic “middle passages”—only to face a life of hard labor, dismal living conditions, and, especially, sexual exploitation. As Bahadur explains, however, it is precisely their sexuality that makes coolie women stand out as figures in history. Greatly outnumbered by men, they were able to use sex with their overseers to gain various advantages, an act that often incited fatal retaliations from coolie men and sometimes larger uprisings of laborers against their overlords. Complex and unpredictable, sex was nevertheless a powerful tool.

Examining this and many other facets of these remarkable women’s lives, Coolie Woman is a meditation on survival, a gripping story of a double diaspora—from India to the West Indies in one century, Guyana to the United States in the next—that is at once a search for one’s roots and an exploration of gender and power, peril and opportunity.

“An astonishing document—both a historical rescue mission and a profound meditation on family and womanhood, Gaiutra Bahadur’s Coolie Woman spans continents and centuries, the private and the national, to bring to light the extraordinary lives of the author’s great-grandmother and the other quarter of a million coolie women that came to the New World as indentured laborers. Bahadur’s meticulous research and tireless perseverance have restored an important chapter in our histories—outstanding work.”

Junot Díaz, author of This Is How You Lose Her

“Bahadur has written a masterly chronicle of the lives of ‘coolie women’ (and also ‘coolie men’). . . . . The stories are both poignant and horrific: abuse, promiscuity, rape, mutilation, cuckoldry, and murder abound (according to Bahadur, this legacy still survives in Guyana), owing to the shortage of women and the double struggle between ‘men and women, colonizer and colonized.’ . . . This spellbinding account of a story that needed to be told is highly recommended.”

“Deeply personal yet assiduously researched. From the treacherous sea voyage to the colonial outpost of British Guiana to the sexual privileges conferred on indentured women as the scarcer sex, Bahadur reconstructs the ‘coolie’ woman’s fate in astonishing detail.”

“Coolie Woman is a genealogical page-turner interwoven with a compelling, radical history of empire told from the perspective of indentured women—or ‘coolies,’ as they were known by the British. The collective voice of the jehaji behen (ship sisters) has been barely audible across the centuries, until now. . . . Bahadur grants us rare imaginative access to the odyssey through the experience of women’s stories she finds in the archives.”

“In reconstructing the lives of the indentured and, in particular, the experience of her great­grandmother, Gaiutra Bahadur has produced an intricate, thoroughly researched, and beautifully written book that evokes the experience of emigrant Indians and their descendants.”

“A moving, foundational book, investigating the experience of indentured Indian women in the Caribbean. It is solidly researched and as such it reveals the difficulty of understanding the human lives concealed within documents. Bahadur delicately reconstructs these women’s lives, seen only through a glass darkly, piecing them together with respect and even admiration.”

“This is a story of how colonialism made the modern world, and of how some of the women who laboured in foreign lands worked to build the wealth that still sparkles in the enclaves of opulence and power from London to La Lucia. This is a complex story about our complex past that offers little to the often crude nationalisms that, from Guiana to Fiji and South Africa, not to mention India, are emerging in response to our inability to really decolonise our societies. Those who wish to find romantic myths in the past to power deeply conservative ideas about the present, and the role of women in an imagined future, will find little to work with here. What this book does show, and what history always shows when it’s examined properly, is that the past was just as complex and messy as the present. But it also shows that in that messy complexity there is, then as now, resilience, innovation, renewal and courage.”

“The strength of this book resides in its rivetingly intricate documentation of the experiences of Indian indentured females that Bahadur provides. The author succeeds in presenting otherwise underexamined or overlooked details of the lives of these women in a very compelling narrative, woven from skeins of meticulous details but never pedantic in its presentation. Drawing from a notable range of pertinent primary and secondary sources, the work can definitely be used as a source of valuable corroborative details in both academic and nonacademic engagements with the Indian indenture system. Coolie Woman has definitely earned itself an undeniable place in the narratives of gender, migration, labor, Indian, Caribbean, and diaspora studies.”

“India’s indentured women may have been deprived of the right to tell their own stories, but Bahadur has told us hers. And through it she breaks a historical silence, and gives untold truths a voice.”

“With a poignant narrative that is part biography, part history, and part memoir, Bahadur gives voice to the voiceless.”

“Coolie Woman is about indenture, yes. It’s also a product of unflinching inquiry into community, diaspora, displacement, New World immigration, the body politic, and the persistent legacy of colonialism. Reading it is immersive, dense, and challenging in the best way: it marks a series of redefinitions, broadening the basin of one’s assumptions governing indenture. It illuminates the tableaux of Indian women’s stories, blowing heaped decades of dust from their surfaces. Bahadur handles this history without compromise, imbuing it with prismatic context, deepening the true stories that can be told about the journeys that so many women undertook.”

“In Coolie Woman, [Bahadur] combines her journalistic eye for detail and storytelling gifts with probing questions, relentlessly pursuing leads to create a haunting portrait of the life of a subaltern. ‘Can the subaltern speak?’ the theorist Gayatri Chakravorty Spivak had asked rhetorically. Yes, she can. Through the story of Sheojari, Bahadur shows how.”

“Fascinating story, which will have resonance for millions of others who are swept up and transformed by history and have to find a new way to create ‘home.’”

“Gaiutra Bahadur’s book made me realize how the experience of a whole generation of women like her great-grandmother profoundly challenges the various stereotypes we have. This is a highly original combination of careful scholarship and well-told personal journey.”

“Gaiutra Bahadur’s pathbreaking book carefully excavates an imperial history of violence and uprooting. But this is no simple account of victimhood. It shows, with understated literary power, the bitterly paradoxical nature of colonial modernity: the unbearable dialectic between enslavement and liberation that many unsung millions underwent in their private lives.”

Pankaj Mishra, author of From the Ruins of Empire

“With the exhilarating meticulousness of a period film, Coolie Woman recreates a vanished world and casts a personal searchlight on the saga of indenture. Gaiutra Bahadur rescues her great-grandmother Sujaria and other coolie women from the archives by means of a narrative that is both scholarly and soulful. In detailing the bitter journeys of her forebears, in making their astonishing experiences real and sympathetic, and in registering the complexities of their lives—not least the extent to which they made choices where one might have expected helplessness—Bahadur honors their memories and shows herself their worthy descendant.”

“Gaiutra Bahadur braids a dazzling rope from the history of Indian migration to the Caribbean, the experience of Indians in Guyana and of Indo-Guyanese immigrants in the United States, and the joy and pain of ‘return’ to India. Deeply researched, elegantly written, Coolie Woman is a major contribution to the literature of diaspora.”

“An impassioned, meticulously researched, and gripping book that shines a fierce light on a dark, unexplored corner of the history of colonialism and slavery, Coolie Woman intertwines the personal and the historical to sensational effect. It is also a uniquely affecting piece of work.”

“Every so often a history book comes along that grips you into a cascade of compelling narrative. The writer excavates new ore from old seams. Coolie Woman is such a book, destined for a unique place in the multi-mirror of Caribbean culture.”

7. Beautiful Woman Without a Nose

8. Gone But Not Forgotten

9. The Dream of Return