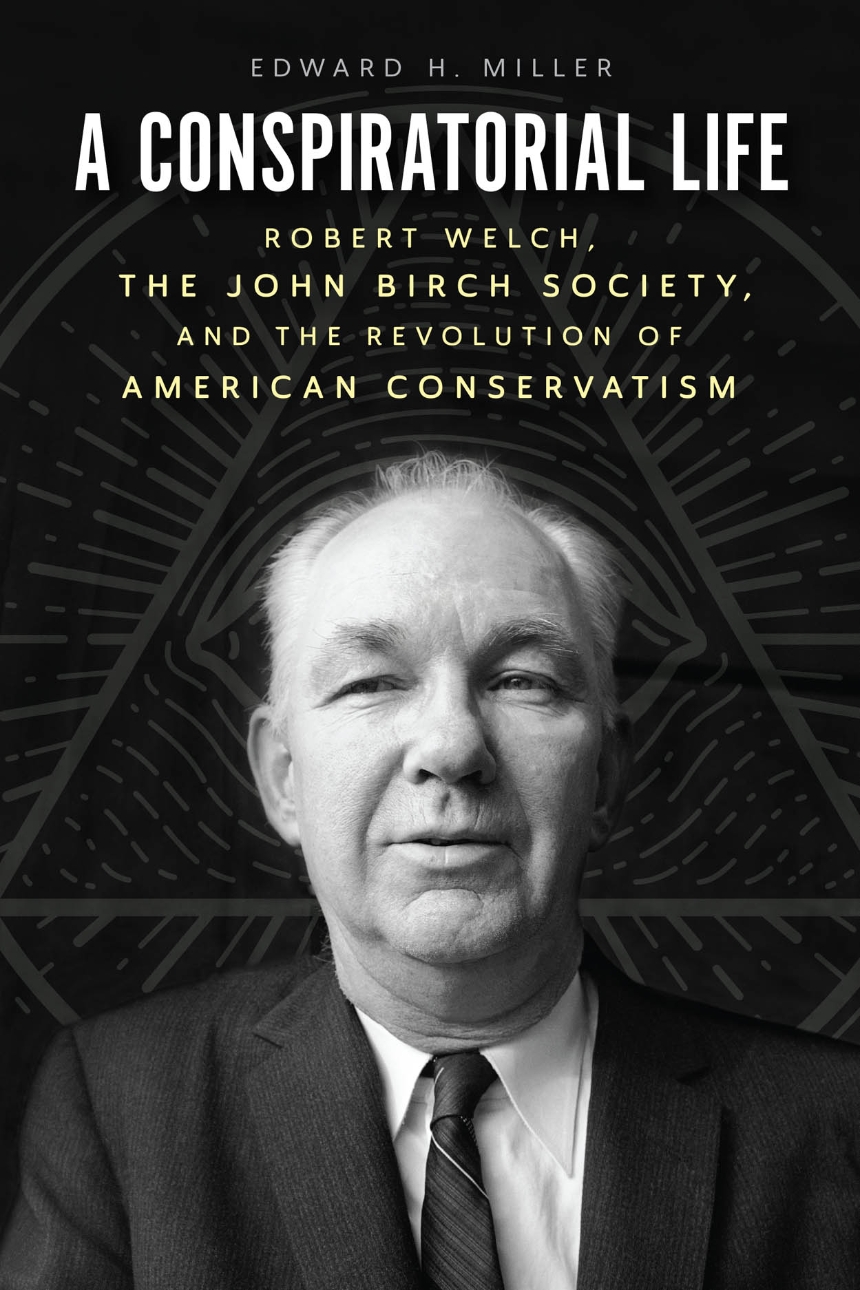 Robert Welch, the John Birch Society, and the Revolution of American Conservatism

Robert Welch, the John Birch Society, and the Revolution of American Conservatism

The first full-scale biography of Robert Welch, who founded the John Birch Society and planted some of modern conservatism’s most insidious seeds.

Though you may not know his name, Robert Welch (1899-1985)—founder of the John Birch Society—is easily one of the most significant architects of our current political moment. In A Conspiratorial Life, the first full-scale biography of Welch, Edward H. Miller delves deep into the life of an overlooked figure whose ideas nevertheless reshaped the American right.

A child prodigy who entered college at age 12, Welch became an unlikely candy magnate, founding the company that created Sugar Daddies, Junior Mints, and other famed confections. In 1958, he funneled his wealth into establishing the organization that would define his legacy and change the face of American politics: the John Birch Society. Though the group’s paranoiac right-wing nativism was dismissed by conservative thinkers like William F. Buckley, its ideas gradually moved from the far-right fringe into the mainstream. By exploring the development of Welch’s political worldview, A Conspiratorial Life shows how the John Birch Society’s rabid libertarianism—and its highly effective grassroots networking—became a profound, yet often ignored or derided influence on the modern Republican Party. Miller convincingly connects the accusatory conservatism of the midcentury John Birch Society to the inflammatory rhetoric of the Tea Party, the Trump administration, Q, and more. As this book makes clear, whether or not you know his name or what he accomplished, it’s hard to deny that we’re living in Robert Welch’s America.

“In this highly readable, insightful biography of Robert Welch, Miller uses his unique access into Welch's papers to reveal a man much more important to modern American conservatism than we have previously understood. Miller shows how, far from being marginalized to the fringes of the movement, Welch was central to creating the destructive conspiratorial worldview that now dominates our politics.”

Heather Cox Richardson, author of “Letters from an American”

“[A] terrific biography. . . In Miller’s hands, the story of Robert Welch shows that there was no real dividing line between the responsible and radical right.”

"The rise of Trump, Q-anon, and a Republican Party seemingly allergic to the ordinary canons of decency and expertise, has led historians to a reexamination of brands of American conservatism previously considered too extreme to be relevant to understanding the present. This work demands a rare combination of talents: an ability to empathize with ways of thinking from which reason recoils, and a moral sense that refuses to normalize it. Miller possesses both in abundance, which is what makes this groundbreaking biography of Robert Welch of the John Birch Society so very valuable."

“In this immersive biography, Miller traces the roots of today’s right-wing conspiracy theories to John Birch Society founder Robert Welch . . . Scrupulously researched and lucidly written, this is an enlightening study of an overlooked yet influential figure in American politics.”

“Miller’s study of Robert Welch, the founder of the John Birch Society, presents a plausible account of America’s slow descent from the 1950s into the abyss of post-truth politics.”

“A Conspiratorial Life is the first comprehensive biography of Robert Welch. It is revelatory about his role in the development of modern American conservatism.”

“[An] impressively researched and nuanced reconsideration of the modern American right. . . Miller makes a provocative and persuasive case that Welch was a vanguard figure rather than a retrograde one.”

“A reminder that outlandish conspiracism has a long history on the right.”

“Miller has undertaken the definitive biography of John Birch Society founder Robert Welch, and he has succeeded. A Conspiratorial Life is incredibly thorough, carefully researched and written, and enlivened by energetic prose.”

"A welcome contribution to the history of modern right-wing politics at its extremes."

"In the standard origin story of the modern US right, today's conservative movement was born with an excommunication: when William F. Buckley, the erudite, upper-crust founder of the National Review, turned on his onetime ally, Robert Welch of the John Birch Society, driving Welch and the rest of the conspiracy-hunting "Birchers" out of the respectable right. The truth, as always, is much messier, as Edward H. Miller demonstrates in his new book. . . The deeper imperative of the book, Miller writes, is to correct historians' long-standing misapprehensions about conservatism, and what the field has missed by dismissing the darker, stranger corners of the right, and how its apparent losers may have won the long game."

"An eye-opening look at the deep roots of rightwing politics in the United States. Sweeping in scope, the book takes a deep dive into the fears at the heart of the John Birch Society . . . [Miller] provides a deep, thoughtful, and accessible account of Welch’s lasting hold on U.S. politics."

We live in the age of Robert Welch—whether or not we know who he is, what he did, or why he matters. So shouldn’t we know something more about a man whose worldview is absolutely everywhere?

The day Joseph R. Biden took the oath of office from Chief Justice John Roberts and became the forty-sixth president of the United States, Donald J. Trump still had not conceded. Election fraud by the Democrats, Trump tweeted for two whole months, stole the election from him and the American people. But this claim was pure myth. Court after election commission after court found no evidence to support Trump’s words. A full 75 percent of Republicans didn’t believe that Joe Biden legitimately won the 2020 election, laying the groundwork for Donald Trump to incite an insurrection to steal it for real.

The QAnon conspiracy theory—which holds that Democrats in the Deep State undermined Trump’s presidency in order to cover up their child-sex racket, and claims Representative Marjorie Taylor Greene among its more prominent adherents—is favorably viewed by nearly one-third of Republicans, while polling shows that violent anti-democratic sentiment is rampant in the conservative movement. And when Republican lawmakers had a chance to draw a bright line between their party and the conspiracy theorists and the insurrectionists during Trump’s impeachment trial, the vast majority voted to acquit.

Who then was Robert Welch? To some, he was a genius: a child prodigy who was reading at age two. He attended the University of North Carolina when he was twelve. He created the Sugar Daddy and other childhood confectioneries. He founded the John Birch Society, the most successful anti-Communist organization in the history of the United States.
To his detractors, he was at best a prophet of doom who predicted that the country was on the verge of a Communist conspiracy engulfing all aspects of American life—education, religion, the government. His star flew high but petered out by the late 1960s when the John Birch Society was no longer a force to be reckoned with.

Many Americans first learned of the candy maker after March 20, 1961. That day, Senator Milton Young of North Dakota stepped up to the rostrum of the US Senate; read thirteen pages of Welch’s book, The Politician; and reported that Welch called former president Dwight David Eisenhower a Communist.
Now in most periods of American history, Welch’s bizarre thesis would have made him a pariah. Welch would have been pitied as somebody suffering a pathology. He would have been disqualified as an irresponsible purveyor of unreasonable ideas.

But these were not usual times. The Cold War was at its height, and Americans were very anxious. They were stocking food and building bunkers. They were getting ready to “duck and cover” in the event of a nuclear attack from the Soviet Union that might come any moment.
Times were tense.

Thus, Welch was not just seen as unreasonable. He was considered a danger to the country. After all, he was calling the man who planned D-Day, defeated Hitler, and won World War II a Red. Welch embodied extremism and the body politic, according to the consensus. He became associated in the public mind with the Ku Klux Klan, the racist White Citizens’ Councils, and even George Lincoln Rockwell’s American Nazis. The Anti-Defamation League called him a covert anti-Semite. Others said there was nothing covert about him.

Welch’s problem was that most of what he said about Communism seemed absurd. His analysis sounded delusionary and made all anti-Communists appear ridiculous.

Welch’s early life helped make him a conspiracist. He was born in a postbellum South that was very suspicious of the North. His ancestors feared the loss of their social status, the loss of their slaves, the loss of their jobs, and the decline of their White supremacy. And even after he had left the South, as a young candy manufacturer working in an industry without patents and fearing that his latest confectionery invention could be pilfered by the competition, Welch was always in a state of hypervigilance. That Welch’s original business was unsuccessful contributed to his insecurity. And after he went into business with his brother, James, whom he’d taught everything he knew about the candy business, he discovered James never considered him a business partner but simply an employee who deserved a daily wage but no more.

In the early 1950s, Welch watched with great interest Senator Joseph McCarthy’s investigations into Communist infiltration of government. Welch came to echo and even amplify the allegations of treason from McCarthy and other Republican public officials, such as Senator William Jenner. Secretary George Marshall was one of the most honorable men in the country, but Senator Jenner called Marshall “a front man for traitors” and suggested that Marshall tricked the American people into World War II. Jenner set the stage for McCarthy’s attacks on the army, which set the stage for Welch’s assaults on the former head of the army—Dwight David Eisenhower. Amid numerous allegations of espionage, McCarthy attacked Secretary of State Dean Acheson and Marshall as part of “a conspiracy on a scale so immense so as to dwarf any previous such venture in the history of man.” Daily calls for Acheson’s resignation became the norm for the Republican Party...

In the long run, Welch’s kind of conspiracy has grown only stronger. More people believe extreme theories. It used to be that Welch’s commitment to conspiracy theory made him, as well the John Birch Society, easy to dismiss; this may be why no historian has written a full-scale biography of Welch. Pieces of the story are included in the scores of books on American conservatism, but they tend to focus on the Society’s marginalization and its waning importance to postwar conservatism after 1966.

When Donald Trump won the presidency, historians began revising the standard narrative of American conservatism. That standard narrative holds that the Welch conspiratorial style waned when the patron saint of American conservatives, William F. Buckley, kicked him out of the conservative movement in the early 1960s. Other journalists and academics wrote off the John Birch Society and Welch as irrational and paranoid. Because of his penchant for conspiracy theory, Welch threatened the America that Buckley wanted to build. Historians largely embraced Buckley’s vision that making conservatism “intellectually respectable” was absolutely necessary to its success: Buckley purged extremists, and these excommunications made possible the rise of the age of Reagan. According to the usual narrative, Welch and the Society became particular liabilities to the Republican Right after Barry Goldwater’s tremendous defeat in the presidential election of 1964. But Welch was a far more flexible and important a figure to the Republican Party than historians have realized.