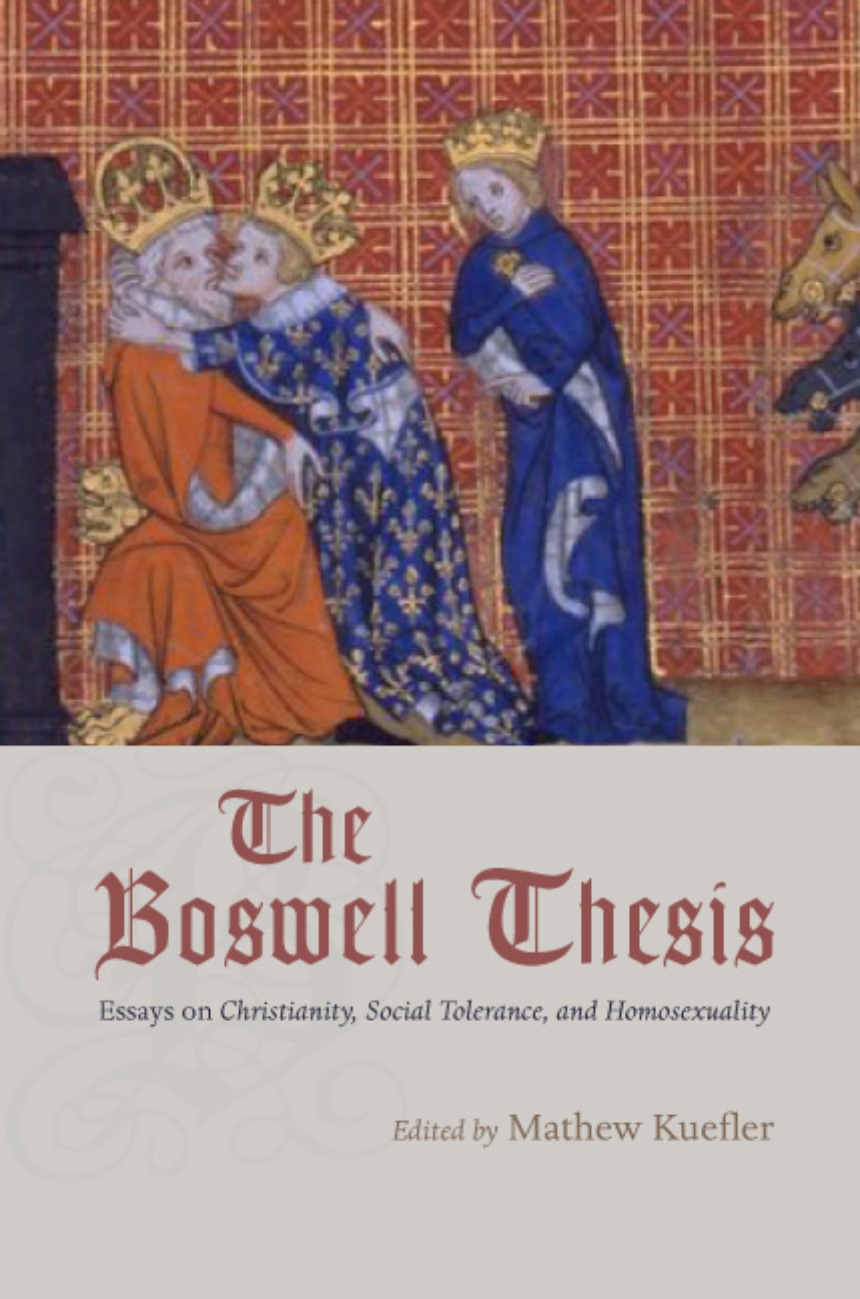 Few books have had the social, cultural, and scholarly impact of John Boswell’s Christianity, Social Tolerance, and Homosexuality. Arguing that neither the Bible nor the Christian tradition was nearly as hostile to homoeroticism as was generally thought, its initial publication sent shock waves through university classrooms, gay communities, and religious congregations. Twenty-five years later, the aftershocks still reverberate. The Boswell Thesis brings together fifteen leading scholars at the intersection of religious and sexuality studies to comment on this book’s immense impact, the endless debates it generated, and the many contributions it has made to our culture.

The essays in this magnificent volume examine a variety of aspects of Boswell’s interpretation of events in the development of sexuality from Classical Antiquity through the Middle Ages, including a Roman emperor’s love letters to another man; suspicions of sodomy among medieval monks, knights, and crusaders; and the gender-bending visions of Christian saints and mystics. Also included are discussions of Boswell’s career, including his influence among gay and lesbian Christians and his role in academic debates between essentialists and social constructionists.

Elegant and thought-provoking, this collection provides a fitting twenty-fifth anniversary tribute to the incalculable influence of Christianity, Social Tolerance, and Homosexuality and its author.

“The Boswell Thesis is a timely and remarkably coherent collection of essays that demonstrate the extraordinary impact of John Boswell’s Christianity, Social Tolerance, and Homosexuality. Elegantly written, thoroughly researched, and thought provoking, these papers will be appreciated by anyone with an interest in the history of sexuality, the history of religion, and, of course, everyone who found Boswell’s ideas to be such a revelation.”--William N. Bonds, emeritus, San Francisco State University

"Anyone concerned with the study of medieval sexual attitudes and behavior will find this attractive and well-chosen collection of essays intellectually provocative and stimulating."

"An overwhelming strength of The Boswell Thesis is the undeniable cohesiveness of the collection. . . . If the reader leaves the collection wanting more, it is not for lack of comprehensiveness. Rather the essays prove so easily digestible and consistently interesting that the end comes too soon! . . . While the studied insights within will engage astute scholars, the book may just as easily be directed at non-specialized audiences. The brevity of the essays . . . evenness of the contributions, and accessible writing also allow for the work to be read by advanced undergraduate and graduate students as a wonderful introduction to the study of medieval gender and sexuality."

"A thoughtful and interesting reflection on the impact and place in history of John Boswell’s bold and ambitious Christianity, Social Tolerance and Homosexuality. . . . An admirable tribute to Boswell’s industrious contributions to the field, The Boswell Thesis . . . has much to offer its readers, and many will find it difficult to put down."

"The Boswell Thesis is itself evidence that, even twenty-five years after its publication, Christianity, Social Tolerance, and Homosexuality is still there, is still provoking."

Part I - Impact
2. John Boswell’s Gay Science: Prolegomenon to a Re-Reading
by Ralph Hexter
3. Touching on the Past
by Carolyn Dinshaw
4. Reading CSTH as a Call to Action: Boswell and Gay-Affirming Movements in American Christianity
by Bernard Schlager
5. "Both as a Christian and as a Historian": On Boswell’s Ministry
by Mark D. Jordan

Part II - Debates
6. Fronto + Marcus: Love, Friendship, Letters
by Amy Richlin
7. Heterosexism and the Interpretation of Romans 1:18-32
by Dale B. Martin
8. My Sister, My Spouse: Woman-Identified Women in Medieval Christianity
by E. Ann Matter
9. R. W. Southern, John Boswell, and the Sexuality of Anselm
by Bruce O’Brien
10. Male Friendship and the Suspicion of Sodomy in Twelfth-Century France
by Mathew Kuefler

Part III - Innovations
11. Impossible Translation: Antony and Paul the Simple in the Historia Monachorum
by Mark Masterson
12. Beauty and Passion in Tenth-Century Córdoba
by Jeffrey A. Bowman
13. Sexual Mutilation and Castration Anxiety: A Medieval Perspective
by Jacqueline Murray
14. Knighthood, Compulsory Heterosexuality, and Sodomy
by Ruth Mazo Karras
15. The Body of Gerardesca of Pisa Reclothed and Resexed
by Penelope D. Johnson
16. Francis of Assisi as Mother, Father, and Androgynous Figure
by Catherine M. Mooney