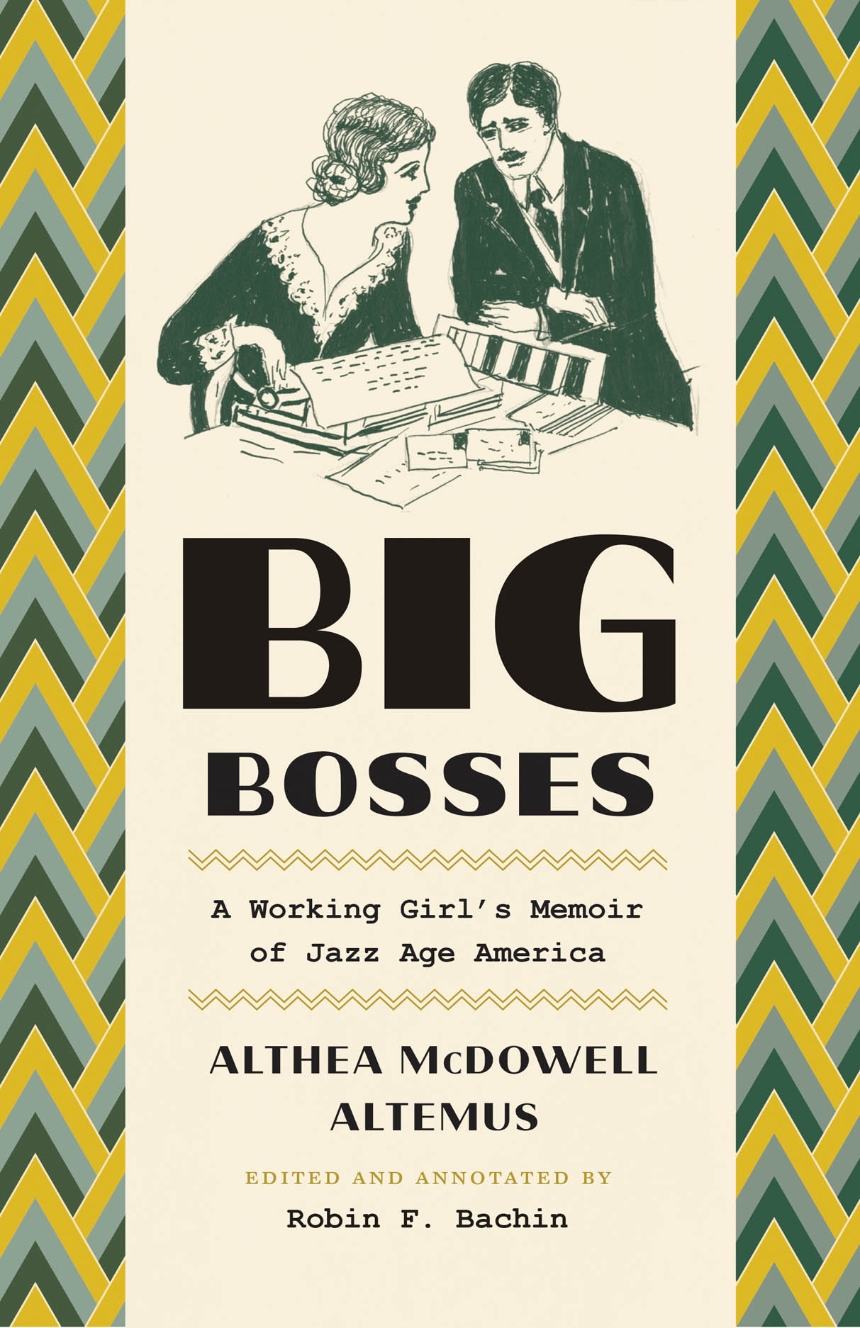 Edited, Annotated, and with an Afterword by Robin F. Bachin
Sharp, resourceful, and with a style all her own, Althea Altemus embodied the spirit of the independent working woman of the Jazz Age. In her memoir, Big Bosses, she vividly recounts her life as a secretary for prominent (but thinly disguised) employers in Chicago, Miami, and New York during the late teens and 1920s. Alongside her we rub elbows with movie stars, artists, and high-profile businessmen, and experience lavish estate parties that routinely defied the laws of Prohibition.

Beginning with her employment as a private secretary to James Deering of International Harvester, whom she describes as “probably the world’s oldest and wealthiest bachelor playboy,” Altemus tells us much about high society during the time, taking us inside Deering’s glamorous Miami estate, Vizcaya, an Italianate mansion worthy of Gatsby himself. Later, we meet her other notable employers, including Samuel Insull, president of Chicago Edison; New York banker S. W. Straus; and real estate developer Fred F. French. We cinch up our trenchcoats and head out sleuthing in Chicago, hired by the wife of a big boss to find out how he spends his evenings (with, it turns out, a mistress hidden in an apartment within his office, no less). Altemus was also a struggling single mother, a fact she had to keep secret from her employers, and she reveals the difficulties of being a working woman at the time through glimpses into women’s apartments, their friendships, and the dangers—sexual and otherwise—that she and others faced. Throughout, Altemus entertains with a tart and self-aware voice that combines the knowledge of an insider with the wit and clarity of someone on the fringe.

Anchored by extensive annotation and an afterword from historian Robin F. Bachin, which contextualizes Altemus’s narrative, Big Bosses provides a one-of-a-kind peek inside the excitement, extravagances, and the challenges of being a working woman roaring through the ’20s.

Published in collaboration with Vizcaya Museum and Gardens

“Lively and enchanting. . . . Her tales [are] dishy, witty and a ton of fun. . . . It’s unclear what Altemus intended for this manuscript, which she wrote in 1932, but never released. What is clear is that, thanks to the efforts of her descendants, Hoffman, and Bachin, we are lucky now to have this remarkable—and remarkably written—document of everyday life and work in 20th century America from a perspective that is all too rarely seen.”

"Big Bosses shows the importance of female subcultures among women workers, the significance of personal bonds of female friendship. It shows how challenging it was for women to forge lives of their own in an era when the vote was newly secured but when other basic rights for women, such as credit and property ownership in their own names, would be contested for decades to come. . . . Big Bosses stands as a real contribution to our understanding of the history of working women in Jazz Age America."

“In her remarkable memoir, originally written under the pseudonym ‘A Private Secretary,’ Altemus recounts the wildest indiscretions of her employers between 1918 and 1925. . . . Altemus’ stories expose the challenges for young working women in the 1920s, when employers could fire secretaries for being married, a mother, or blonde. The annotations and afterword by historian Bachin provide context that enriches and clarifies the narrative.”

A Note on the Transcription