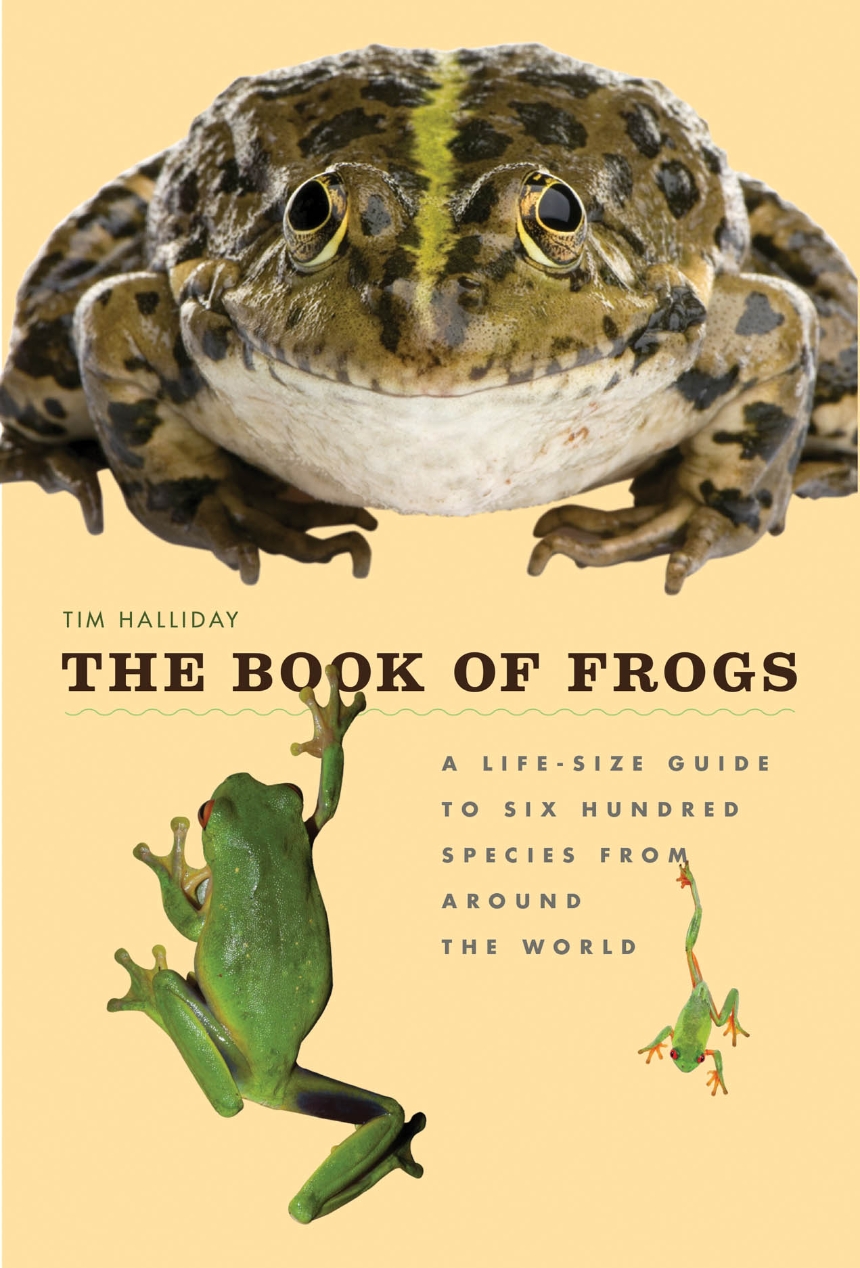 The Book of Frogs

The Book of Frogs

With over 7,000 known species, frogs display a stunning array of forms and behaviors. A single gram of the toxin produced by the skin of the Golden Poison Frog can kill 100,000 people. Male Darwin’s Frogs carry their tadpoles in their vocal sacs for sixty days before coughing them out into the world. The Wood Frogs of North America freeze every winter, reanimating in the spring from the glucose and urea that prevent cell collapse.

The Book of Frogs commemorates the diversity and magnificence of all of these creatures, and many more. Six hundred of nature’s most fascinating frog species are displayed, with each entry including a distribution map, sketches of the frogs, species identification, natural history, and conservation status. Life-size color photos show the frogs at their actual size—including the colossal seven-pound Goliath Frog. Accessibly written by expert Tim Halliday and containing the most up-to-date information, The Book of Frogs will captivate both veteran researchers and amateur herpetologists.

As frogs increasingly make headlines for their troubling worldwide decline, the importance of these fascinating creatures to their ecosystems remains underappreciated. The Book of Frogs brings readers face to face with six hundred astonishingly unique and irreplaceable species that display a diverse array of adaptations to habitats that are under threat of destruction throughout the world.
See sample pages from the book (PDF format).

"If you are a serious (and I mean serious) fan of the frog, you are in for a real treat. From poisonous frogs to tiny toenail-sized frogs, whistlers, “explosive breeders,” endangered frogs, and recently discovered frogs, author and one of the world’s leading frog experts Tim Halliday covers an exhaustive gamut of frog species from around the planet. A wonderful source for anyone trying to decipher and learn about frogs they find in nature."

"A huge, beautiful compendium of 600 frogs from around the world, from the famed poison-arrow variety on up to the intriguingly named plaintive rain frog. The book is a looker."

"An unlikely human phenomena, an exploration of the intricacies and eccentricities of our world and the amount of knowledge it is possible for one person to possess and present with inspiringly obvious passion. Halliday’s personality pops on every page, rendering even the dullest frogs adorable through his eyes. Halliday captures both the extraordinary and ordinary of frogs in the same breathless prose that you wrote in love notes to your eighth-grade crush. Couple that with six hundred beautifully composed pictures of sometimes beautiful animals, and you’ve got yourself one hell of a novelty book. In its several months as the centerpiece of my coffee table, The Book of Frogs has generated more conversation than any other item in my apartment. It’s an aesthetic pleasure as an art object, informative as a reference guide."

"Scientific knowledge about frogs has been increasing rapidly.  For example, the number of described species has jumped from 5,000 to more than 7,000 in the last 15 years.  At the same time, frogs are a focus of great concern due to severe population declines and extinctions worldwide. This large book by amphibian expert Halliday is a photographically rich introduction to the global diversity of frogs."

“Glorious, magnificent new behemoth of a book. Wisely, Halliday chooses to stick to the basics. His enormous book—a big, beautiful hardcover filled with color photos—follows a close-focused remit, giving a one-page snapshot of some 600 species of the world’s frogs. In the book’s mesmerizing master stroke, there’s also a life-sized photo of each frog, from the ones as small as your fingernail to the ones as big as a fat Guinea Pig. It’s a stunning cavalcade, ranging from dull and knobby toads to tree frogs of almost translucent beauty….It’s a joyous experience to savor the unbridled strangeness, the bursting profusion in The Book of Frogs.”

"An in-depth ecology not of all the world’s frogs and toads, but of a representative fascinating ten per cent--what a superb 600 it is! . . . The Book of Frogs does a splendid job of showing the diversity of frogs and toads."

"A rich compendium of 600 frog species, including many that are critically endangered. This taxonomy provides complete distribution, natural history, and conservation status information, as well as life-size photographs for each species, and is laden with fascinating facts that emphasize the diversity of frogs and the many risks to their persistence worldwide."

"Halliday has compiled an extensive compendium of frogs, and presents a wide array of fascinating facts in rich prose....The real selling point is the full-color photos, showing the actual size of each frog. The Book of Frogs is the perfect coffee table book for anyone with a passing interest in Anura."

"This book will be a wonderful source of basic information for any young person who has become fascinated with frogs, or anyone unfamiliar with frogs who has a desire to learn more about their diversity and biology."

What is a frog?

Why the number of frog species is increasing 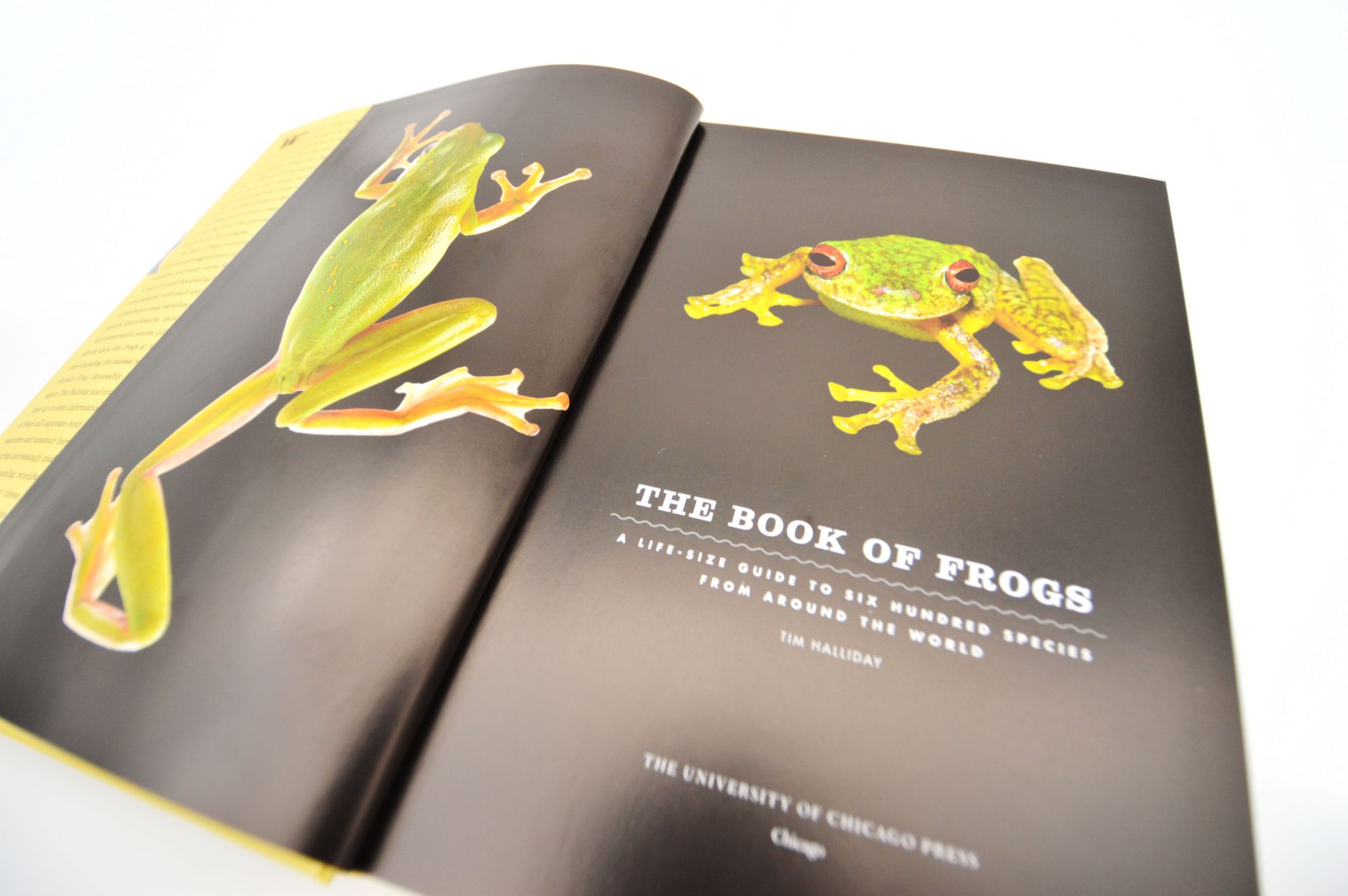 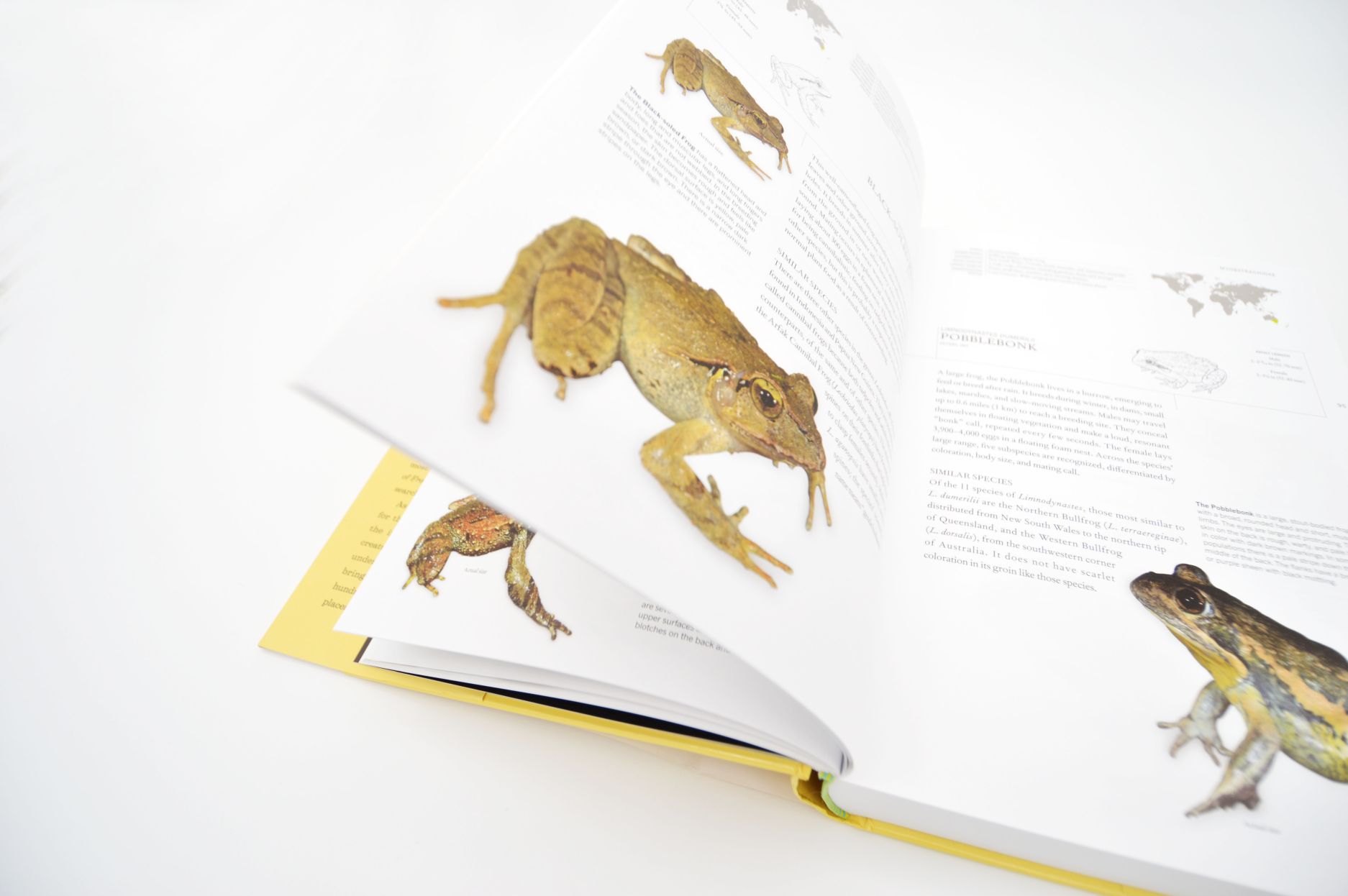 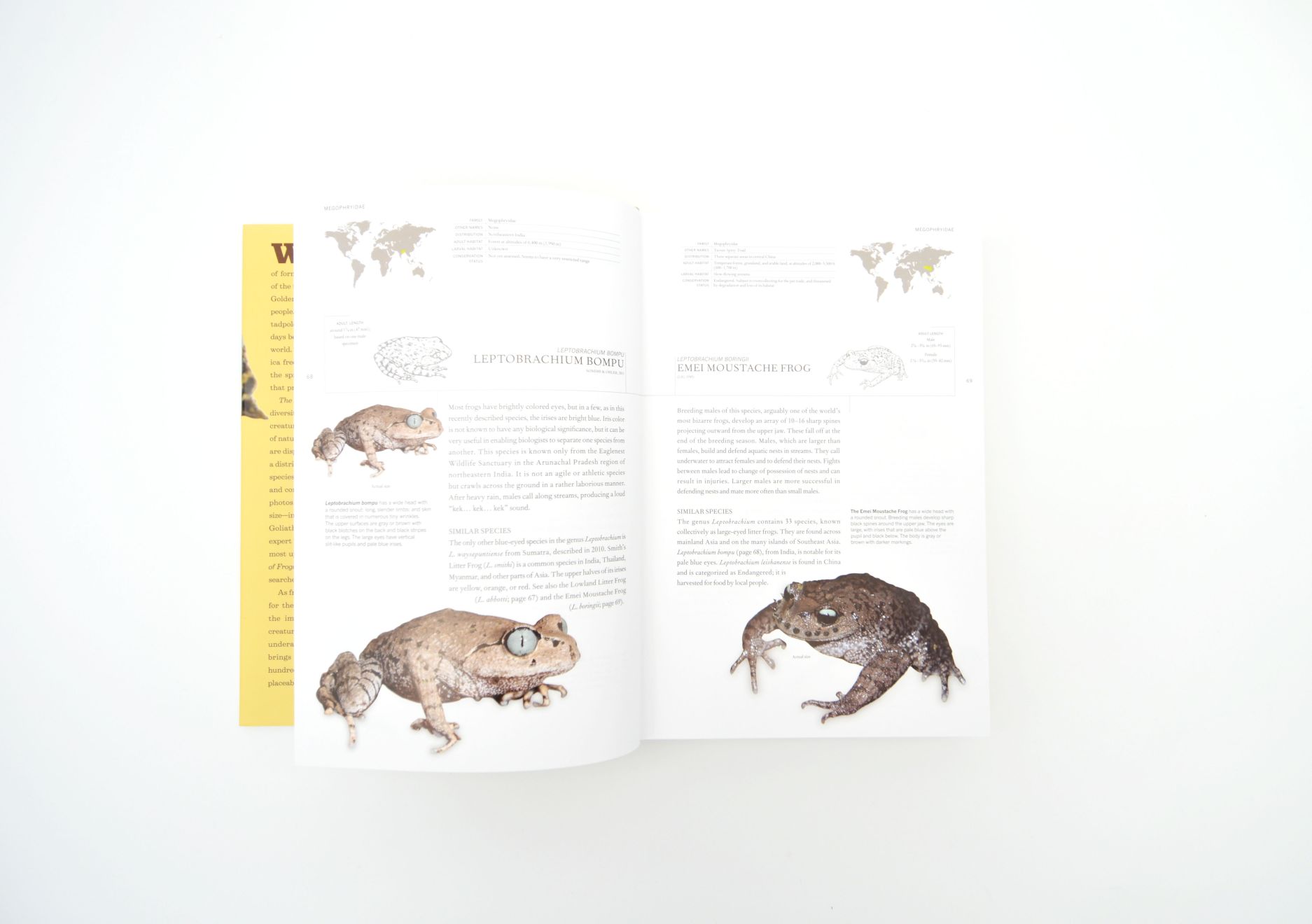 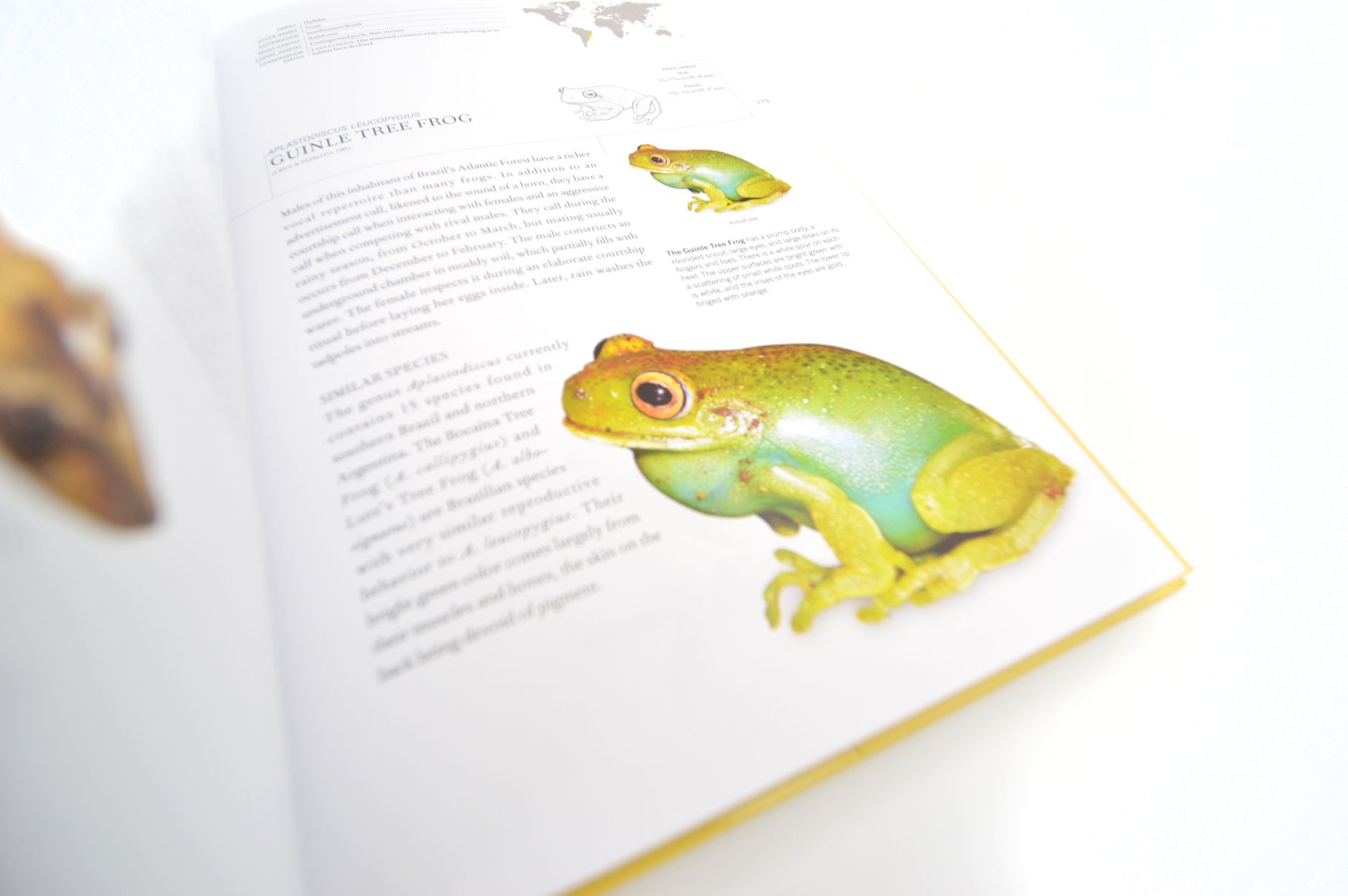 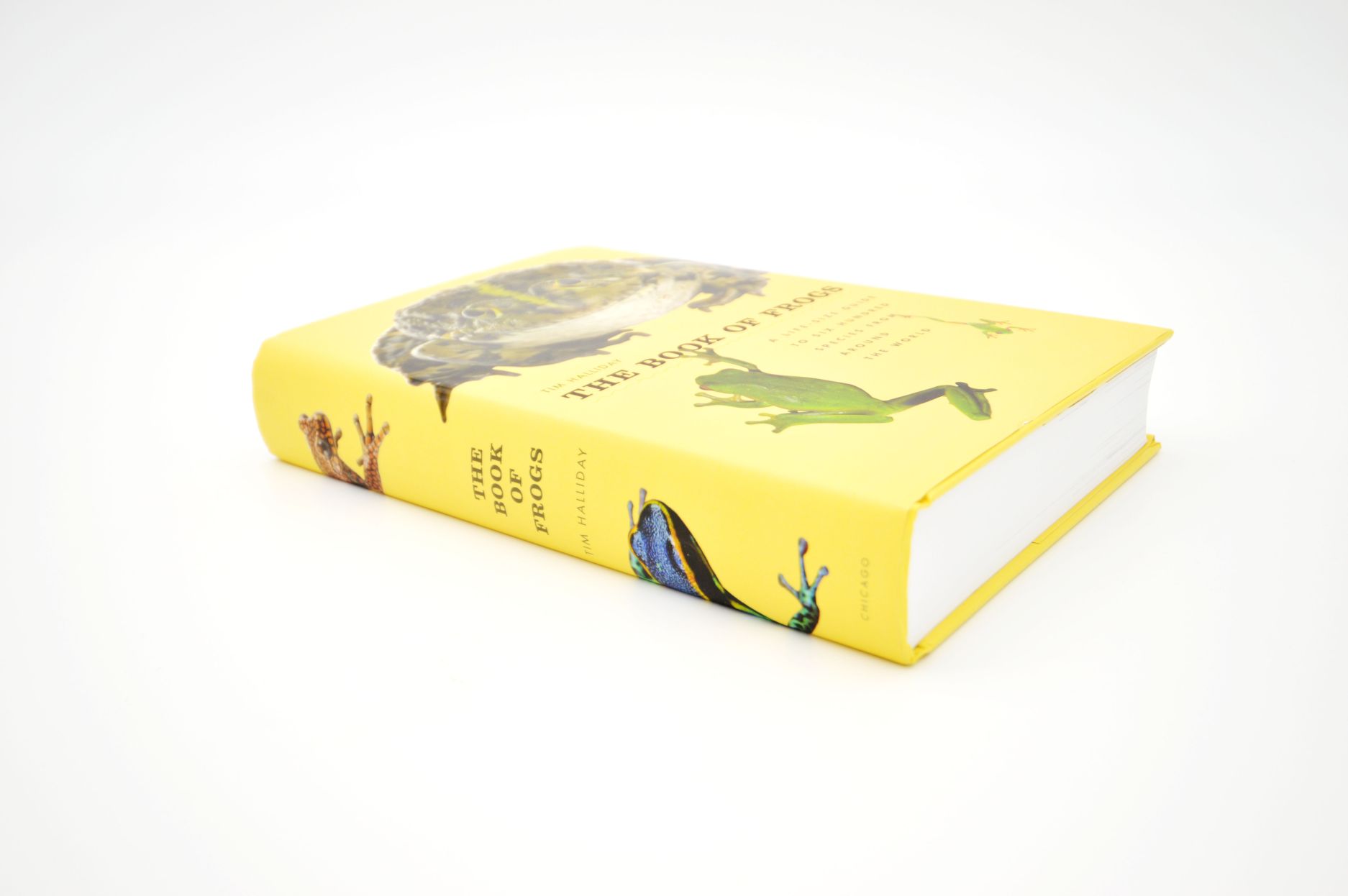