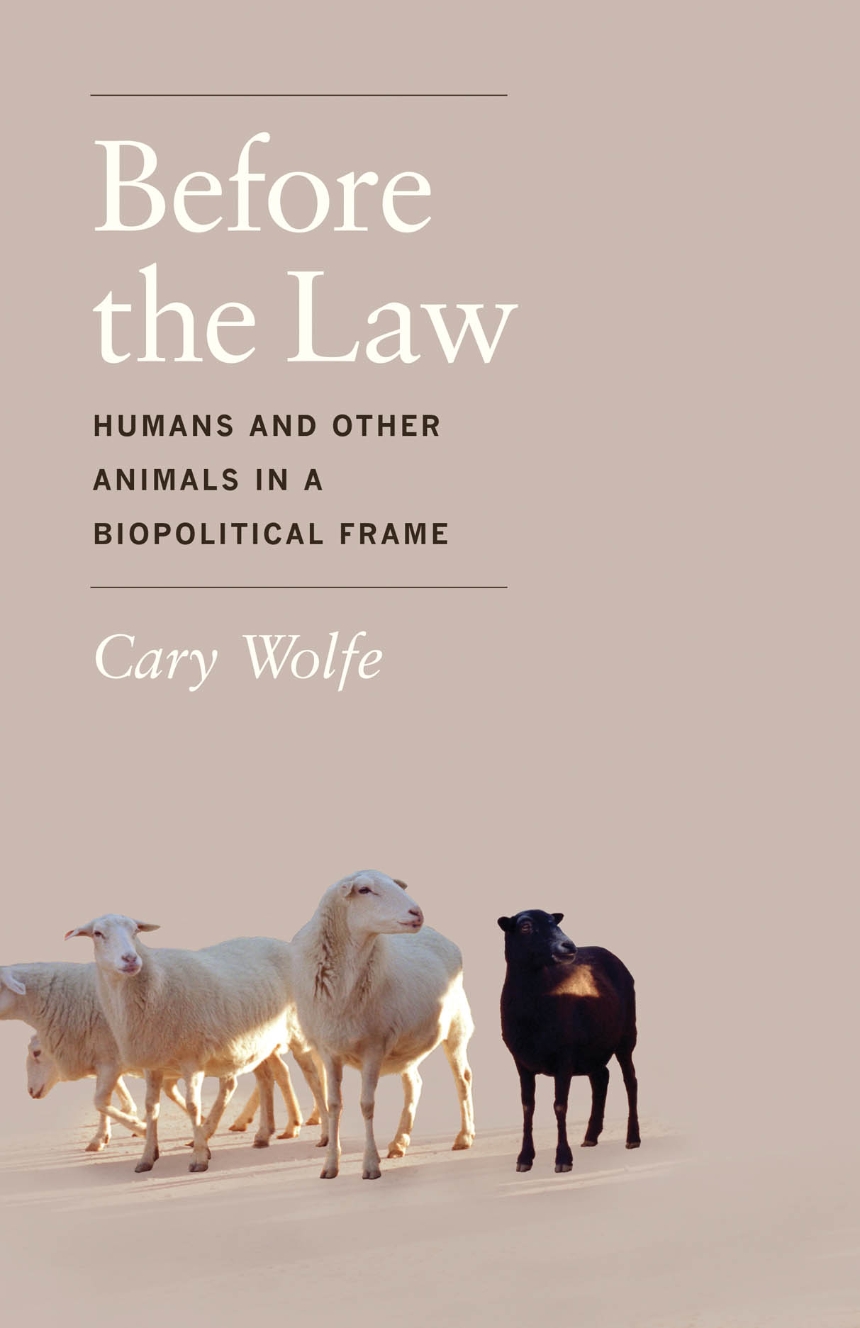 Humans and Other Animals in a Biopolitical Frame

Humans and Other Animals in a Biopolitical Frame

Animal studies and biopolitics are two of the most dynamic areas of interdisciplinary scholarship, but until now, they have had little to say to each other. Bringing these two emergent areas of thought into direct conversation in Before the Law, Cary Wolfe fosters a new discussion about the status of nonhuman animals and the shared plight of humans and animals under biopolitics.
Wolfe argues that the human­­­-animal distinction must be supplemented with the central distinction of biopolitics: the difference between those animals that are members of a community and those that are deemed killable but not murderable. From this understanding, we can begin to make sense of the fact that this distinction prevails within both the human and animal domains and address such difficult issues as why we afford some animals unprecedented levels of care and recognition while subjecting others to unparalleled forms of brutality and exploitation. Engaging with many major figures in biopolitical thought—from Heidegger, Arendt, and Foucault to Agamben, Esposito, and Derrida—Wolfe explores how biopolitics can help us understand both the ethical and political dimensions of the current questions surrounding the rights of animals.

“Before the Law makes a powerful case for the extension of Michel Foucault’s biopolitical analysis to include the lives of nonhuman animals. . . . The analysis is most powerful when it grounds its seemingly abstract theoretical discussions of sovereignty, immunity, and dispositifs in the concrete practices of industrial farming, cloning of animals, and the containment of H1N1. A must read for scholars of biopolitics of animality, synthesizing and extending a dense set of literatures in an accessible manner. Essential.”

“A stunning tour de force. . . .Opens up the possibility for working from within our given tradition toward a different politics, with different concepts and different practices.”

“”Wide-ranging and erudite. . . . Wolfe is able to illuminate hidden dimensions of biopolitical power and also clarify how certain approaches to animal rights both reinforce and challenge biopolitical structures and relations.”

“Before the Law shows, in a highly convincing way, that paying attention to the question of nonhuman animal life has the potential to radicalize biopolitical thought beyond its usual boundaries. Cary Wolfe unfolds step by step, brilliantly and without concessions, each proposition contained in biopolitical theories, creating a pragmatic and political ethics of attention and care—not only an ethics of that which causes us to think and act in a certain way but that which involves the lives of other beings who have been excluded from political questioning. The pragmatic question of ‘How it matters’ becomes over the course of this book a real cosmopolitical question: ‘How it matters and for whom?’”

“In this timely and thought-provoking book, Cary Wolfe takes the reader on an intellectual journey that critically reexamines the human-animal relationship, a distinction that not only grounds philosophy but that largely determines our ideas of culture and politics. Before the Law is like Descartes’s Meditations for the posthuman era, written by animals.”

“In Before the Law,Cary Wolfe skillfully interweaves two levels of discourse related to current debates concerning the animal—animal rights and biopolitics—achieving the not insignificant feat of flattening out the differences between a type of everyday knowledge and the more rarefied discussions that take place in academic debate. Clearly developed and cogently argued, this book puts existing formulations on the defensive while at the same time challenging them to respond to what is in essence a very straightforward but pressing question: have we really begun to think through what ‘animal life’ means or to deal with the consequences of such questioning?”