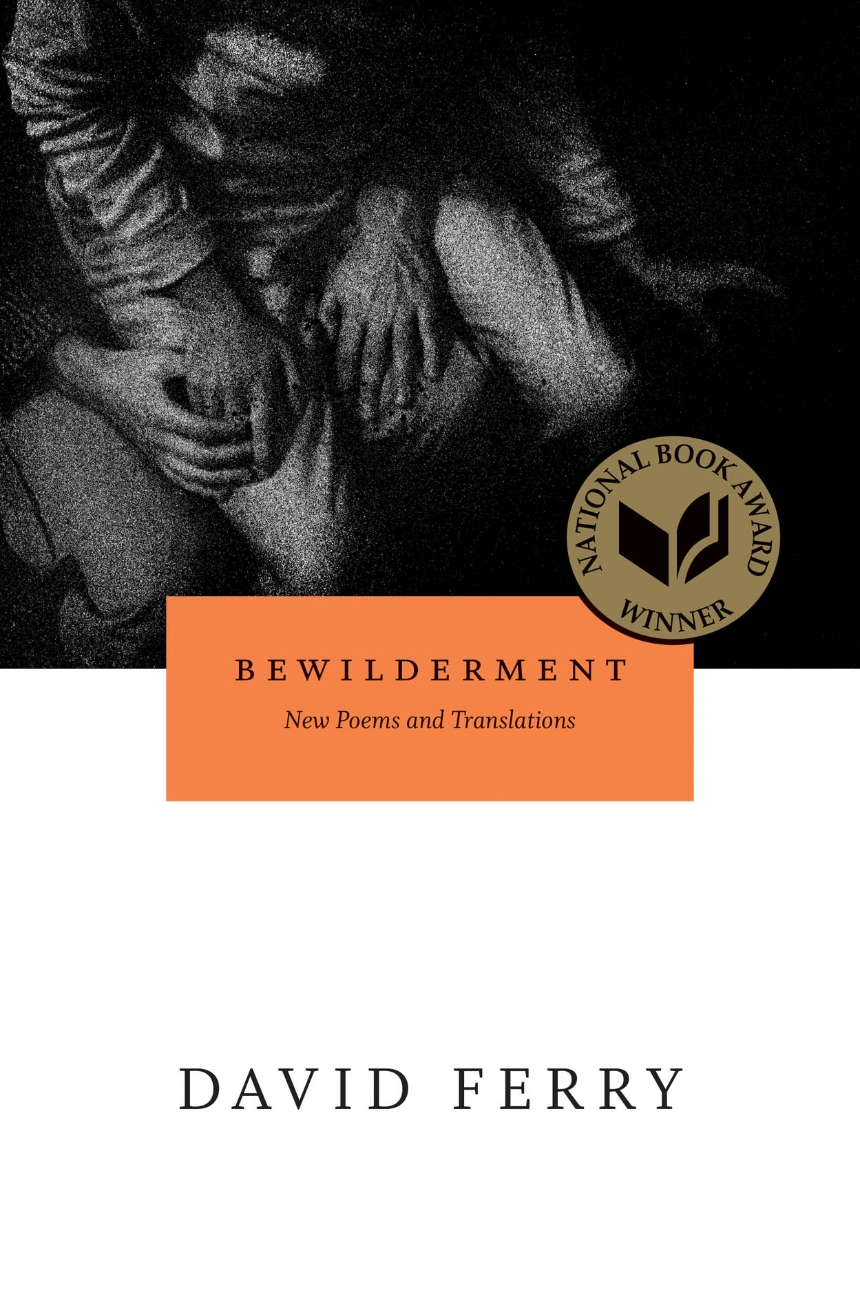 Winner of the 2012 National Book Award for Poetry.

To read David Ferry’s Bewilderment is to be reminded that poetry of the highest order can be made by the subtlest of means. The passionate nature and originality of Ferry’s prosodic daring works astonishing transformations that take your breath away. In poem after poem, his diction modulates beautifully between plainspoken high eloquence and colloquial vigor, making his distinctive speech one of the most interesting and ravishing achievements of the past half century. Ferry has fully realized both the potential for vocal expressiveness in his phrasing and the way his phrasing plays against—and with—his genius for metrical variation. His vocal phrasing thus becomes an amazingly flexible instrument of psychological and spiritual inquiry. Most poets write inside a very narrow range of experience and feeling, whether in free or metered verse. But Ferry’s use of meter tends to enhance the colloquial nature of his writing, while giving him access to an immense variety of feeling. Sometimes that feeling is so powerful it’s like witnessing a volcanologist taking measurements in the midst of an eruption.

Ferry’s translations, meanwhile, are amazingly acclimated English poems. Once his voice takes hold of them they are as bred in the bone as all his other work. And the translations in this book are vitally related to the original poems around them.

The day was hot, and entirely breathless, so
The remarkably quiet remarkably steady leaf fall
Seemed as if it had no cause at all.

Or as, when as they passed them in their falling,
Now and again it happened that one of them touched
One or another leaf as yet not falling,

Still clinging to the idea of being summer:
As if the leaves that were falling, but not the day,
Had read, and understood, the calendar.

“These poems highlight an age-old quest for truth that leads the speaker to consider his present and past, and to translate works by Horace, Virgil, Catullus and others. Bewilderment is vivid and sometimes heartbreaking.”

“The entire collection, though its constituent poems are reflective lyrics and philosophically and spiritually charged narratives, becomes a series of conversations on matters of the utmost importance, about which bewilderment is understandable.”

“Ferry intertwines Classical translations with original poems, making profound connections between past and present. I’ve always loved Ferry’s translations of Horace’s Odes, and my favorite is in here: the one about the joys and dangers of drink, with ‘the Sithonian drinkers / who think they tell right from wrong by squinting along / The disappearing line libidinous desire / Draws on the wet bartop.’. . . [A]n intense dose of late-life melancholy.”

"This is one of the great books of poetry of this young century."

“[A]stonishing—a haunted book where ghosts prove that the haunted are still alive and allow for the continuing company of literature. Ferry interleaves translations, an excerpt from a 30-year-old poem of his own, and poems written by a dead friend, each one paired with Ferry’s response, to compose a book that reminds how real the past was, including its poems, and how urgent (and, yes, bewildering) it remains if remembered well.”

“[T]his is an extraordinary book. From poem to poem it reads quietly, intimately, and yet it’s big and ambitious in scope, theme, and execution.”

“Ferry, best known as the translator of Horace, Virgil, and the Gilgamesh epic, is the master of poems as casually digressive meditations.”

“There is no American poet writing a more American poetry than David Ferry; and by the measure of Bewilderment: New Poems and Translations, Ferry succeeds again in showing how American poetry belongs to the world. The rigor of his plain style, its absolute and flexible command of the poem’s verbal surface and his cunning feel for dramatic repetition of word and phrase, put him in a first class of American plain stylists such as Stein, Hemingway, Frost, and David Mamet. As do they, Ferry has a gift for the artfully artless expression, an instinct for reaching far and going deep by sounding the lower registers of speech.”

“David Ferry’s Bewilderment: New Poems and Translations is a necessary book. I was sad when I finished it, and hungry to return and re-read. . . . As Ferry reaches for a way to say somehow what he means, he translates his own bewilderment into speech, and the effect is shocking and heartbreaking.”

“There is no better poet on the planet than David Ferry, and Bewilderment is his best book. For the music that only poetry can offer, for the acute sensation of time passing, for the feeling of life as an effect of absent causes, for the haunted house that is both the present moment and the language by which the present is expressed, the poems in Bewilderment cannot be beat. This book should be read in the same spirit by which it has been written: by heart.”

“This powerful book accompanies its poems with fine translations that reverberate its themes, and with moving responses to the verse of a late colleague. Bewilderment is the best work of a master whose major theme has always been human loneliness.”

“In this new book of his, David Ferry weaves together, and wonderfully, translations, poems, and poems responding to poems, in such a way as to deepen them all.”

“In this new book, David Ferry shows us that his magnificent translations are as intimately personal as his own poems are heartbreakingly classical. In his wisdom, his self-awareness, his humor at the ways of the world, he has become our Horace. And even better, in the process he has also become more deeply and indispensably himself.”

“Define ‘great’ however you like, David Ferry is a great poet. Everything in his new book, Bewilderment, rises above the plausible, the ‘good writing’ that wins the prizes, the aesthetic wrangles and period styles of the moment. This book powerfully projects what Wallace Stevens called ‘a new knowledge of reality’—one stricken by time, but timelessly achieved. I can’t imagine the reader who wouldn’t love this book.”

The Offering of Isaac (From Genesis A, Anglo-Saxon)

Orpheus and Eurydice (From Virgil, Georgics IV)
Lake Water
The White Skunk
Virgil, Aeneid VI
That Now Are Wild and Do Not Remember
Untitled Dream Poem

The Departure from Fallen Troy (From Virgil, Aeneid II)
to where
Resemblance
Scrim
Poem
The Birds