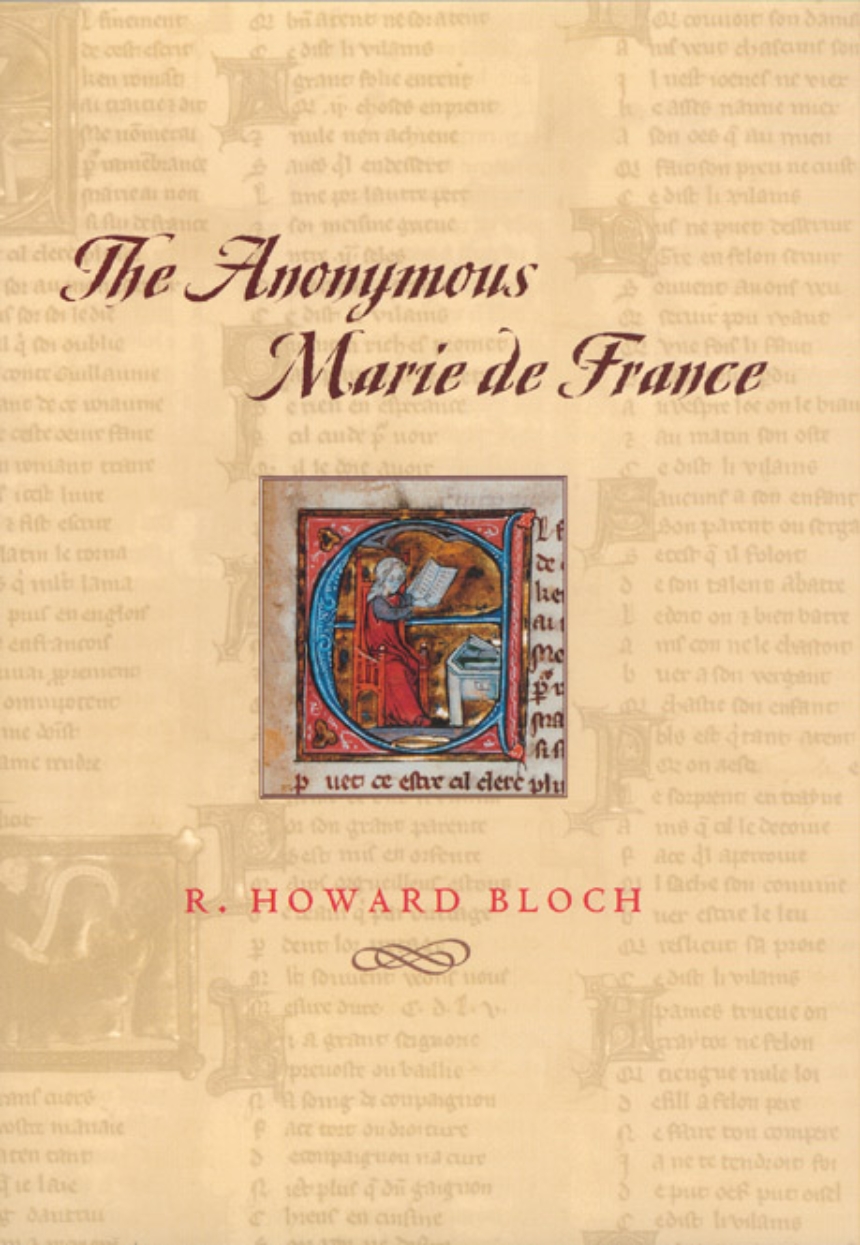 This book by one of our most admired and influential medievalists offers a fundamental reconception of the person generally assumed to be the first woman writer in French, the author known as Marie de France. The Anonymous Marie de France is the first work to consider all of the writing ascribed to Marie, including her famous Lais, her 103 animal fables, and the earliest vernacular Saint Patrick’s Purgatory.

Evidence about Marie de France’s life is so meager that we know next to nothing about her-not where she was born and to what rank, who her parents were, whether she was married or single, where she lived and might have traveled, whether she dwelled in cloister or at court, nor whether in England or France. In the face of this great writer’s near anonymity, scholars have assumed her to be a simple, naive, and modest Christian figure. Bloch’s claim, in contrast, is that Marie is among the most self-conscious, sophisticated, complicated, and disturbing figures of her time-the Joyce of the twelfth century. At a moment of great historical turning, the so-called Renaissance of the twelfth century, Marie was both a disrupter of prevailing cultural values and a founder of new ones. Her works, Bloch argues, reveal an author obsessed by writing, by memory, and by translation, and acutely aware not only of her role in the preservation of cultural memory, but of the transforming psychological, social, and political effects of writing within an oral tradition.

Marie’s intervention lies in her obsession with the performative capacities of literature and in her acute awareness of the role of the subject in interpreting his or her own world. According to Bloch, Marie develops a theology of language in the Lais, which emphasize the impossibility of living in the flesh along with a social vision of feudalism in decline. She elaborates an ethics of language in the Fables, which, within the context of the court of Henry II, frame and form the urban values and legal institutions of the Anglo-Norman world. And in her Espurgatoire, she produces a startling examination of the afterlife which Bloch links to the English conquest and occupation of medieval Ireland.

With a penetrating glimpse into works such as these, The Anonymous Marie de France recovers the central achievements of one of the most pivotal figures in French literature. It is a study that will be of enormous value to medievalists, literary scholars, historians of France, and anyone interested in the advent of female authorship.

Acknowledgments
Note on Texts
Introduction
Chapter One The Word Aventure and the Adventure of Words
Aventure
Lai
History, Philology, and the Quest for Origins
The Obligation to Speak
The Will to Remember
"Guigemar"
Chapter Two If Words Could Kill: The Lais and Fatal Speech
Marie mal mariée
"Lanval" and "Laüstic"
"Equitan" and "Le Fresne"
"Bisclavret"
Chapter Three The Voice in the Tomb of the Lais
"Eliduc"
"Les Deus Amanz" and "Chaitivel"
"Milun" and "Chevrefoil"
"Yonec"
Chapter Four Beastly Talk: The Fables
The Fables and the Lais
Speech Acts in the Fables
An Ethics of Language
Chapter Five Changing Places: The Fables and Social Mobility at the Court of Henry II
Scholasticism and the Fables
Abelardian Ethics
Appetite and Envy
Logic and the Body
Changing Habitat
Social Mobility
Chapter Six Marie’s Fables and the Rise of the Monarchic State
Right Reason and the Moral
Town and Court and Royal Peace
Measure, Timing, and Alertness
Marie’s Social Contract
Chapter Seven A Medieval "Best Seller"
Chivalric Adventure
Doors In and Out of the Otherworld
In and Out of Another Tongue
Making the Dead Speak
Chapter Eight Between Fable and Romance
Making the Dead See
Testimony and Transcription
Genesis of the Tale
Remembering What the Dead Have Said and Seen
Chapter Nine The Anglo-Norman Conquest of Ireland and the Colonization of the Afterlife
Patrick the Administrator
The Norman and Irish Peace Movement
Ecclesiastical Reform and the Cistercian Presence
The Civil Governance of Captured Land
The Invention of Purgatory and the Bureaucratization of the Afterlife
Purgatory and the Law
Conclusion
Notes
Index
Back to top