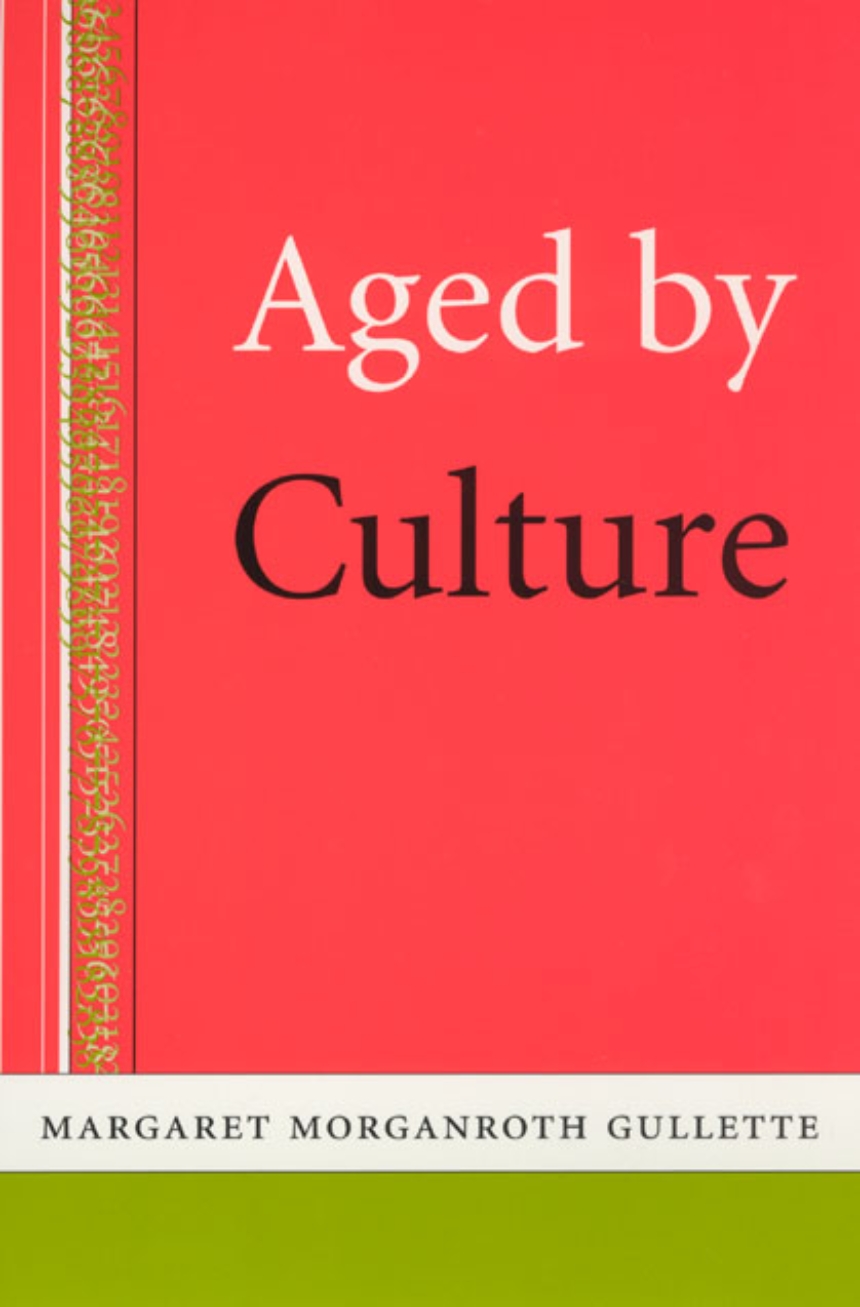 Americans enjoy longer lives and better health, yet we are becoming increasingly obsessed with trying to stay young. What drives the fear of turning 30, the boom in anti-aging products, the wars between generations? What men and women of all ages have in common is that we are being insidiously aged by the culture in which we live.

In this illuminating book, Margaret Morganroth Gullette reveals that aging doesn’t start in our chromosomes, but in midlife downsizing, the erosion of workplace seniority, threats to Social Security, or media portrayals of "aging Xers" and "greedy" Baby Boomers. To combat the forces aging us prematurely, Gullette invites us to change our attitudes, our life storytelling, and our society. Part intimate autobiography, part startling cultural expose, this book does for age what gender and race studies have done for their categories. Aged by Culture is an impassioned manifesto against the pernicious ideologies that steal hope from every stage of our lives.

Acknowledgments
Part One: Cultural Urgencies
1. Trapped in the New Time Machines
2. True Secrets of Being Aged by Culture
3. "The Xers" versus "the Boomers": A Contrived War
4. Perilous Parenting: The Deaths of Children and the Fear of Aging-into-the-Midlife
5. The High Costs of Middle-Ageism
Part Two: Theorizing Age Resistantly
6. What Is Age Studies?
7. Age Identity Revisited
8. From Life Storytelling to Age Autobiography
9. Acting Age on Stage: Age-Appropriate Casting, the Default Body, and Valuing the Property of Having an Age
10. Age Studies as Cultural Studies: Beyond Slice-of-Life
Bibliography
Notes
Index
Excerpt

A culturalist conviction unites practitioners in age studies. Its component disciplines may not agree exactly on what “age” is—or for that matter, “aging”— once all this is put into question. But we all study age culture now or in the past, here or abroad, in dominant and subcultures, with the knowledge that the systems producing age and aging could be different—and that if they were, our experiences of the life course would be too. This conviction separates our work from the self-help guides, the “anti-aging” marketeers, or the positivists. The “natural” is conventionally constituted as the Other to the “cultural”— while the masters of the natural busily erase culture. Age studies undoes the erasure of the cultural in the sphere of age and aging.

Feminist theory denaturalized female/male difference, and then started on older/younger differences; critical race theory denaturalized the sphere of black /white difference. Unmaking an essentialized, body-based ideology, Robyn Wiegman says, “superseded the “nature/nurture framework . . . by yielding primary analytic power to the ‘nurture’ side.” This shift of power is one of the great intellectual developments of our time. However incomplete, it has immeasurably heartened the antisexist and the antiracist movements. Now, in reference to age, it is necessary to any antidecline movement. The mere term “age theory” slightly disrupts our mental habits by implying that we should become wary about every age reference.

Existing age studies has made some headway. One of our collective accomplishments has been in dragging “aging”—arguably the most biologized aspect of the construct of age away from nature and toward culture. Some “natural” scientists are edging closer toward age studies by declaring that what we think of as aging is really biosocial damage: physical ills caused by smoking, inactivity, poor diet (called “lifestyle diseases” even though some start before birth), or those caused or worsened inter alia by unemployment, by poverty and environmental racism, by caretaker stress, and by lack of access to health care. “By the time you make it to 60,” says a psychiatrist who has reviewed longitudinal studies, “health and longevity depend less on your genes than on how well you take care [have been able to take care] of yourself.” One of the excitements of epidemiology has been to show that hypertension and heart disease can be caused not by normal aging but by job strain in the workforce. Feminists and public health specialists have proven that menopause discourse and hormone replacement “therapy,” as it was called until July 2002, are more dangerous for women than any “symptoms.” It was culture that made “the male menopause” into a similarly dire prospective decline narrative and that sells Viagra. As such critical perspectives infiltrate the medical model, the evils that “age” our body- minds often turn out to be like toxic waste or “empty-nest syndrome.” Remedies for external inflictions come from not from positive thinking or extreme diets but from better public policy (prevention) and wiser public discourse (antidecline). It becomes harder to blame the body in itself, harder to displace economic or sociopolitical problems onto age, and harder to call age and aging wholly “natural.”

I began this book with prospective narratives told to children and with the worklife biography of the American Dream because revealing the unsuspected narrative bases of aging is way of wrenching attention toward the realm of the sociocultural, where power comes from to tell the stories of the body-mind. One of my goals in writing Aged by Culture is to make “narrative aging” a fruitful and unavoidable concept. Biological determinism—whether the old hormonal or the new genetic kind—could eventually be regarded as another set of aging narratives imposed on our body-minds. But utopian scientific claims about “cracking the code” of bodily aging still distract attention from the many ways life chances are linked to socioeconomic status and discourse. Biochemistry lines up with God as another acultural source of human nature and destiny.

Because this is so, it is also important that scientists are “discovering” growth processes like brain myelination in midlife. That ability to find “natural” continuities of function confirms that the unspoken assumption—anywhere youlook for age-linked organic decay you’ll find it—is weakening. Academic antiageist research—including the MacArthur Foundation’s Research Networks on Successful Midlife Development and on Aging—and OWL/AARP/Gray Panther–style advocacy have been convincing some scientists to uproot the ageist biases influencing research protocols and agendas. That some succeed is also proved by the finding that new brain cells keep being produced throughout life (neurogenesis).
(…)
So, what kind of symbolic/social /ideological /construct is age? The term is maddeningly loose and untidy. It becomes more intelligible if we start by branching into its aspects, like age lore and aging narratives, which organize the meanings of personal time passing. The word “age” as an equivalent to “stage” also refers to those vague categories to which we get assigned and that then become all-too-definite attributes (as in “I’ve decided I’m old now,” or the vehement assertion, “I’m no Boomer!”) And that’s not all the work the one poor noun does. “Age” is also a set of critical and heuristic theories about the construct and the ideology, analogous to “gender.” Is age sufficiently like gender and race, the other allegedly body-based constructs, that age theorists can pick up their analyses, apply them, and expect parallel outcomes? We can’t ignore age’s confusing temporal component, aging, which other critical theories often ignore. Is the inescapable term “aging”—its very grammar marking a process of difference from oneself—one reason why age-as-construct operates differently from gender or race, when it does? Does the word “age” itself (because it serves also as another euphemism for “old age”) weigh itself in too late in the young/old dichotomy to ever shake that binary? The taxonomy I sketch in this paragraph would be arguable to some, superfluous to others. Are these even the right questions?