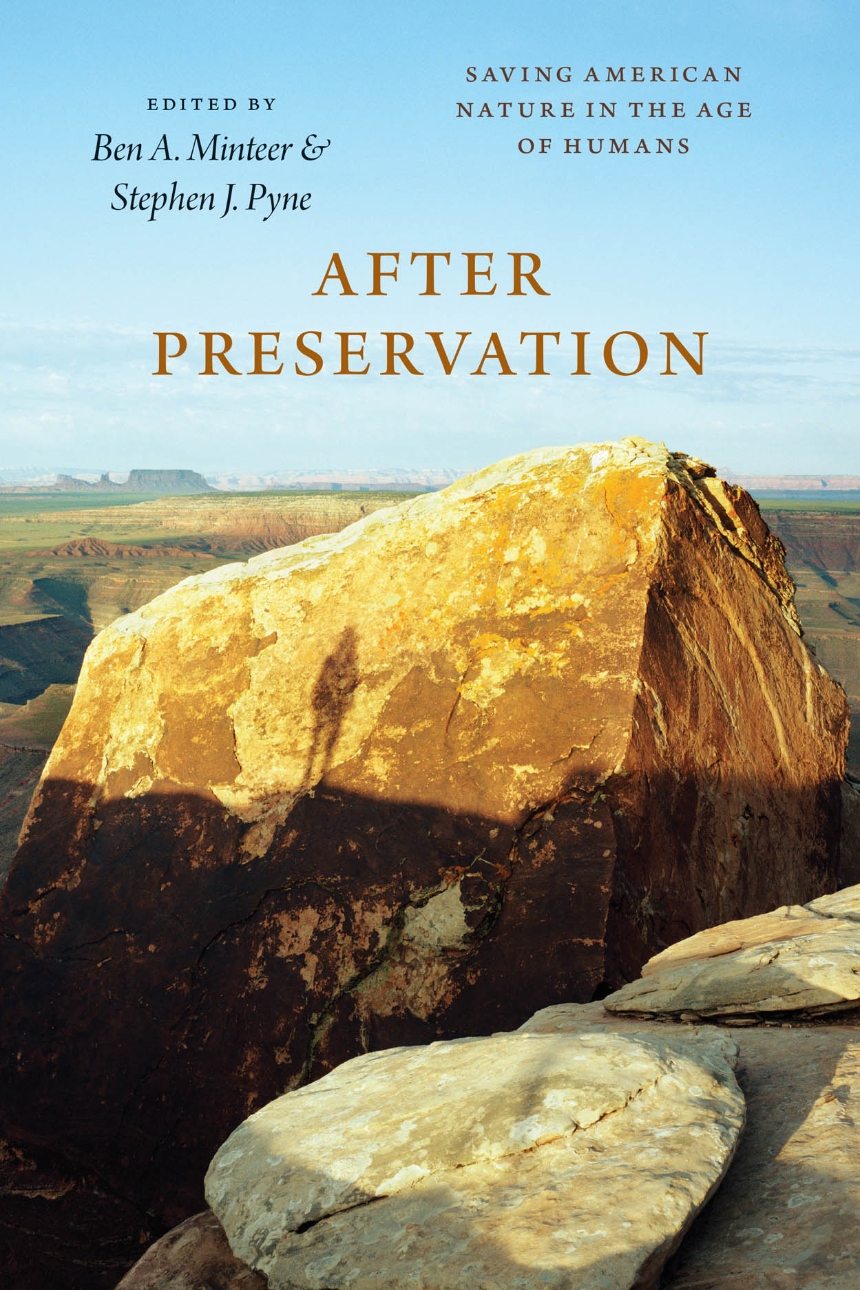 Saving American Nature in the Age of Humans

Edited by Ben A. Minteer and Stephen J. Pyne

Saving American Nature in the Age of Humans

Edited by Ben A. Minteer and Stephen J. Pyne

From John Muir to David Brower, from the creation of Yellowstone National Park to the Endangered Species Act, environmentalism in America has always had close to its core a preservationist ideal. Generations have been inspired by its ethos—to encircle nature with our protection, to keep it apart, pristine, walled against the march of human development. But we have to face the facts. Accelerating climate change, rapid urbanization, agricultural and industrial devastation, metastasizing fire regimes, and other quickening anthropogenic forces all attest to the same truth: the earth is now spinning through the age of humans. After Preservation takes stock of the ways we have tried to both preserve and exploit nature to ask a direct but profound question: what is the role of preservationism in an era of seemingly unstoppable human development, in what some have called the Anthropocene?

Ben A. Minteer and Stephen J. Pyne bring together a stunning consortium of voices comprised of renowned scientists, historians, philosophers, environmental writers, activists, policy makers, and land managers to negotiate the incredible challenges that environmentalism faces. Some call for a new, post-preservationist model, one that is far more pragmatic, interventionist, and human-centered. Others push forcefully back, arguing for a more chastened and restrained vision of human action on the earth. Some try to establish a middle ground, while others ruminate more deeply on the meaning and value of wilderness. Some write on species lost, others on species saved, and yet others discuss the enduring practical challenges of managing our land, water, and air.

From spirited optimism to careful prudence to critical skepticism, the resulting range of approaches offers an inspiring contribution to the landscape of modern environmentalism, one driven by serious, sustained engagements with the critical problems we must solve if we—and the wild garden we may now keep—are going to survive the era we have ushered in.

“Conservation requires conversation; protecting nature while still using it to meet human needs is a paradoxical mission, and its methods depend heavily on time and place. In such terrain, manifestos make lousy guides. Better is a forum such as After Preservation, which not only seats ecomodernists, wilderness purists, bureaucrats, and scientists at the same long, noisy table but also places their positions in historical context.”

“Although environmentalists have traditionally held onto a preservationist philosophy in fending off ecological harms, the omnipresence of human influence makes many now wonder if that approach is still feasible. In this collection of twenty-three spirited and thought-provoking essays, scientists, historians, and activists alike represent a broad spectrum of viewpoints, from conservation at all costs to balancing the natural world’s needs with those of civilization. . . . Everyone concerned with the ongoing debate over wildlife protection will want to study this vitally important contribution to the discussion.”

“In this well-rounded and mostly accessible collection, Arizona State University professors Minteer (The Landscape of Reform) and Pyne (Burning Bush) pull together a range of perspectives on contemporary issues in environmental conservation from academics, ecologists, philosophers, and environmental activists. . . . By inviting a range of voices to the discussion, Minteer and Pyne reveal subjects of importance to both themselves and to their peers around the country.”

“Minteer and Pyne have compiled a variety of opinions from twenty-six environmental specialists on a provocative subject. . . . Overall, the writings illustrate a deep division of American opinion on how to preserve the environment. After Preservation would be a useful resource for university seminars.”

“This is neither a predictable text on environmentalist refusals nor a whistle-in-the-dark expression of shallow optimism about humanity’s great future as a planetary conquering force. This is a great swirl of debate at this critical crossroads in the relationship between humans and the rest of nature. No holds here are barred. In prose sometimes pragmatic and sometimes anguished, some of the best minds in the business—some of the wisest people around today—argue about our place in nature, what it could be, what it should be, what it is, what it will be, and what we must not let it become. I regret that my own book deadline prevented me from contributing to this work. Feeling left out is my highest praise.”

Carl Safina, author of The View From Lazy Point and Beyond Words: What Animals Think and Feel.

“Whether you like the label ‘Anthropocene’ or not, whether you find the prospect of what it signifies inevitable or appalling (or both), the time has come to address its implications, as these thoughtful, battle-tested authors attempt to do. The time has long since come.”

“After Preservation asks one of the big, hairy, audacious questions of the early twenty-first century: How should humans relate to Nature in the Anthropocene? Minteer and Pyne have assembled an impressive assortment of contributors to offer a wide-ranging set of answers in concise, poignant, and powerful essays. This is an important and timely contribution that should be read by people working to construct a thriving and sustainable future.”

Writing on Stone, Writing in the Wind
Ben A. Minteer and Stephen J. Pyne

After Preservation?  Dynamic Nature in the Anthropocene
Holmes Rolston III

Humility in the Anthropocene
Emma Marris

The Anthropocene and Ozymandias
Dave Foreman

A Letter to the Editors:  In Defense of the Relative Wild
Curt Meine

When Extinction Is a Virtue
Ben A. Minteer

Pleistocene Rewilding and the Future of Biodiversity
Harry W. Greene

Restoration, Preservation, and Conservation: An Example for Dry Forests of the West
William Wallace Covington and Diane J. Vosick

Preserving Nature on US Federal Lands: Managing Change in the Context of Change
Norman L. Christensen

Resembling the Cosmic Rhythms: The Evolution of Nature and Stewardship in the Age of Humans
Amy Seidl