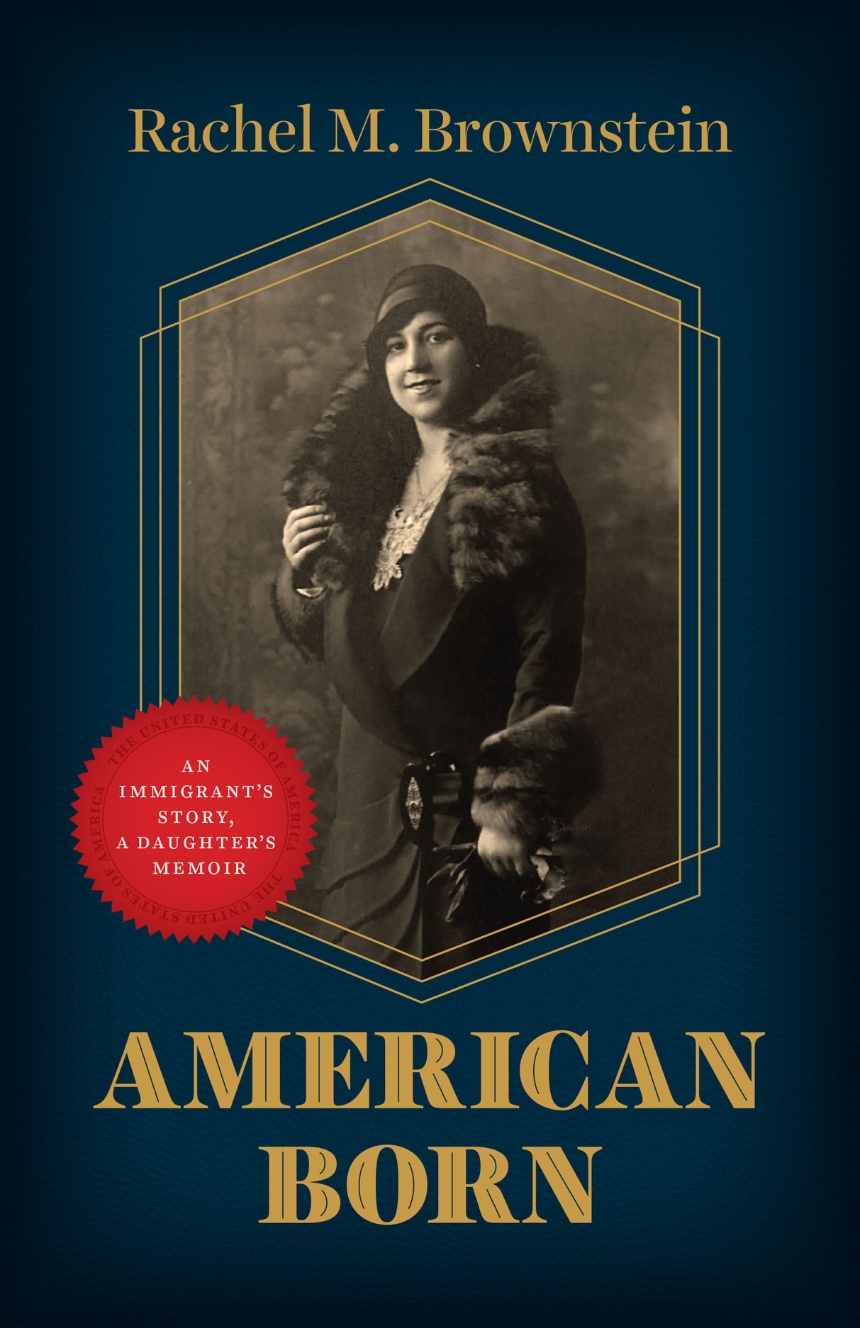 An Immigrant’s Story, a Daughter’s Memoir

An Immigrant’s Story, a Daughter’s Memoir

When she arrived alone in New York in 1924, eighteen-year-old Reisel Thaler resembled the other Yiddish-speaking immigrants from Eastern Europe who accompanied her. Yet she already had an American passport tucked in her scant luggage. Reisel had drawn her first breath on the Lower East Side of Manhattan in 1905, then was taken back to Galicia (in what is now Poland) by her father before she turned two. She was, as she would boast to the end of her days, “American born.”

The distinguished biographer and critic Rachel M. Brownstein began writing about her mother Reisel during the Trump years, dwelling on the tales she told about her life and the questions they raised about nationalism, immigration, and storytelling. For most of the twentieth century, Brownstein’s mother gracefully balanced her identities as an American and a Jew. Her values, her language, and her sense of timing inform the imagination of the daughter who recalls her in her own old age. The memorializing daughter interrupts, interprets, and glosses, sifting through alternate versions of the same stories using scenes, songs, and books from their time together.

But the central character of this book is Reisel, who eventually becomes Grandma Rose—always watching and judging, singing, baking, and bustling. Living life as the heroine of her own story, she reminds us how to laugh despite tragedy, find our courage, and be our most unapologetically authentic selves.

“This memoir is a delightful evocation of a richly expressive world with an altogether worthy protagonist at its center.”

“From the moment I started American Born, I was captivated by the voices calling out to me from every page. Voices that made me laugh, broke my heart, and reminded me that every family’s story is fragile. Brownstein has written an enchantingly engaging and profoundly honest book about memories, exile, legacies, aging, grief, and our collective and endless need for joy. You must read American Born—especially if your family wasn’t.”

Gina Barreca, author of They Used to Call Me Snow White . . . But I Drifted

“Sociable, energetic, and resilient—a young woman whose inclination was to ‘go where all the cars were going’—Brownstein’s mother was American born. But she was also an immigrant proud to be exactly who she was. Out of this paradox, Brownstein weaves a warm and perceptive account of personal courage in the making of an American family. I loved this book. And everyone with an immigrant in the family will love it too.”

Alice Kessler-Harris, author of A Difficult Woman: The Challenging Life and Times of Lillian Hellman

“In this beautiful mother-daughter memoir, Brownstein’s keen intelligence about character is richly evident, as is her sense of how Yiddish worked in families, in songs, on the street—what people carried from the old country in their linguistic baggage. Each individual chapter blends in elements from the others, creating a full immersion in Grandma Rose’s world that is truly Proustian in its social intelligence.”

“More than a memoir, American Born is also an extended personal essay, a search through archive and memory, pondering the historical reality of this life. Above all, it is a treasure—a valuable addition not only to American immigration history but to the history of twentieth-century European identity.”

Patricia Hampl, author of The Art of the Wasted Day

In the photograph my white-haired mother, seventy-seven years old, handsome, and still plump, by then a widow for four years, sits in a chair in a corner of my living room on Riverside Drive. A modernistic lamp with a translucent plastic shade lights her from above; houseplants crowd the darkness around her. She looks up and out, leaning her head on her hand, but her focus is inward: she is pensive, subdued, maybe a little melancholy but alert. The plants are gone now and the lampshade as well, but the comfortable chair—reupholstered—is still there in that corner of my living room. Six years older now than she was then, I sit in it often, these days, reading or just musing, like my mother. Often about my mother. For what this photograph suggests seems to me now to be true: if you have the privilege of watching your life wind up—or is it down—you tend to think about the shape of it, what it might have meant—or, as my mother would have put it, what it amounted to.

One of the stories she liked to repeat to her children and grand-children was about walking around a street corner, one after-noon, just in time to hear one neighbor remark to another, “With due respect for Mrs. Mayer,” evidently preparing to say something not very nice about her. That would have been during her busy years as a mother in Astoria, Queens, where we lived in a three- room ground-floor apartment when I was a child. I never quite got the point of that story, only the plea-sure she took in the formal phrase and the honorific, which delighted her almost as much as having accidentally stoppered the gossip’s mouth.

To this day I can picture the brisk and popular “Mrs. Mayer” of my childhood, corseted and upswept and red- lipsticked, a respectable or, as she preferred, in Yiddish, a balbatish woman: that is who she was in the 1940s and ’50s, decades before she turned into my children’s benign, philosophical, amusing Grandma Rose. Another anecdote she liked to tell on herself (and me) in her old age, delivered with a sly glint, was about overhearing a new friend of mine saying, “Rachel, I didn’t know you had such a Jewish mother.” Self- aware often to the point of self-caricature, she was consciously a variation on a type she might have invented if Gertrude Berg had not played Molly Goldberg on television.

But Gertrude Berg did play Molly Goldberg on television, back then—conceived, wrote, and performed the comic role of the matriarch of a rising American Jewish family— and in my early teens we watched The Goldbergs together as a fam-ily, in the knotty- pine-finished basement of our row house inKew Gardens Hills, a bit farther out in Queens. “Yoo- hoo, Mrs. Goldberg!” her neighbor sang out to begin the show (and my mother sang along with her), and Molly threw up her window to talk across the alley where the wash hung and we— my brother and I and our parents—laughed at the Jewish way Molly talked, as we had laughed at the actress Minerva Pious playing Mrs. Nussbaum on Fred Allen’s radio show, Allen’s Alley, which we had listened to earlier in our small apartment in Astoria.

I grew up in the Golden Age of American Jewish comedy broadcasts. Nourished by the success of the Marx Brothers in the movies, buoyed by the vaudeville of the Borscht Belt in the Catskills, it ran from Jack Benny, Eddie Cantor, Milton Berle, and George Burns (a distant cousin of my mother’s) through Sid Caesar, Carl Reiner, and Mel Brooks, who did Jewish shtick— literally “piece”—for laughs. Known to be Jewish by Jews, recognizable as such by non- Jews, these performers made it funny instead of tragic to be a Yiddish-speaking immigrant from Europe, where the Jews had nearly been exterminated.

Mocking the foreign accents of many of her relatives and neighbors, my mother fairly convinced us she had no accent herself. Our father had a slight accent, she conceded, explain-ing that he was “a naturalized citizen.” (Implicitly, in contrast, Citizen Rose was Nature itself.) She herself had maybe an in-flection in English, an intonation. A lilt. In her later years, as her Yiddishisms increased, she kept her critical little distance from her immigrant peers. The stereotype of the Yiddishe Mama threatened to swallow her, but she eluded by recognizing, dancing with it. She performed authenticity— as well as expertise. And in truth she had none of the creepy secrecy and evasiveness of so many assimilating social-climbing American Jews we knew— and little of the hopeful heartiness of the left-wingers, and only a touch of the sentimentality of truly pious Jews. Unapologetic about who she was and where she came from, she was a righteous but not self- righteous woman— and funny. By the time Dan Greenburg’s How to Be a Jewish Motherwas published in 1964, she could have written it herself.

My parents’ favorite actor was a local hero who made it in Hollywood, the not- too- Jewish Brooklyn boy Danny Kaye, who sang and danced and even fenced, and did all kinds of languages and accents, in the movies. We had an album of his seventy-eights, which we listened to together and memorized. He was so smart and blond and handsome that my parents doted on him as if he were another son— not that any son of theirs would be a professional comedian. Our parents had academic aspirations for us. My smart and blond and handsome brother and I were good students, and in time we both duly became college professors. But in a way we were, deep down, a family of comedians.
(...)
One of my mother’s favorite Polish proverbs, in something of the same vein, goes “Jak się nie pocieszysz, to się powie-sisz,” which she translated as “If you don’t make a joke of it, you’ll go hang yourself.” She was quoting her grandmother, who quoted a philosophical Polish woodcutter she had befriended. It was, as it were, my mother’s philosophy of life, and— although my children correctly inform me that I didn’t recognize her as a philosopher until they grew up and did so—I unthinkingly inherited it.