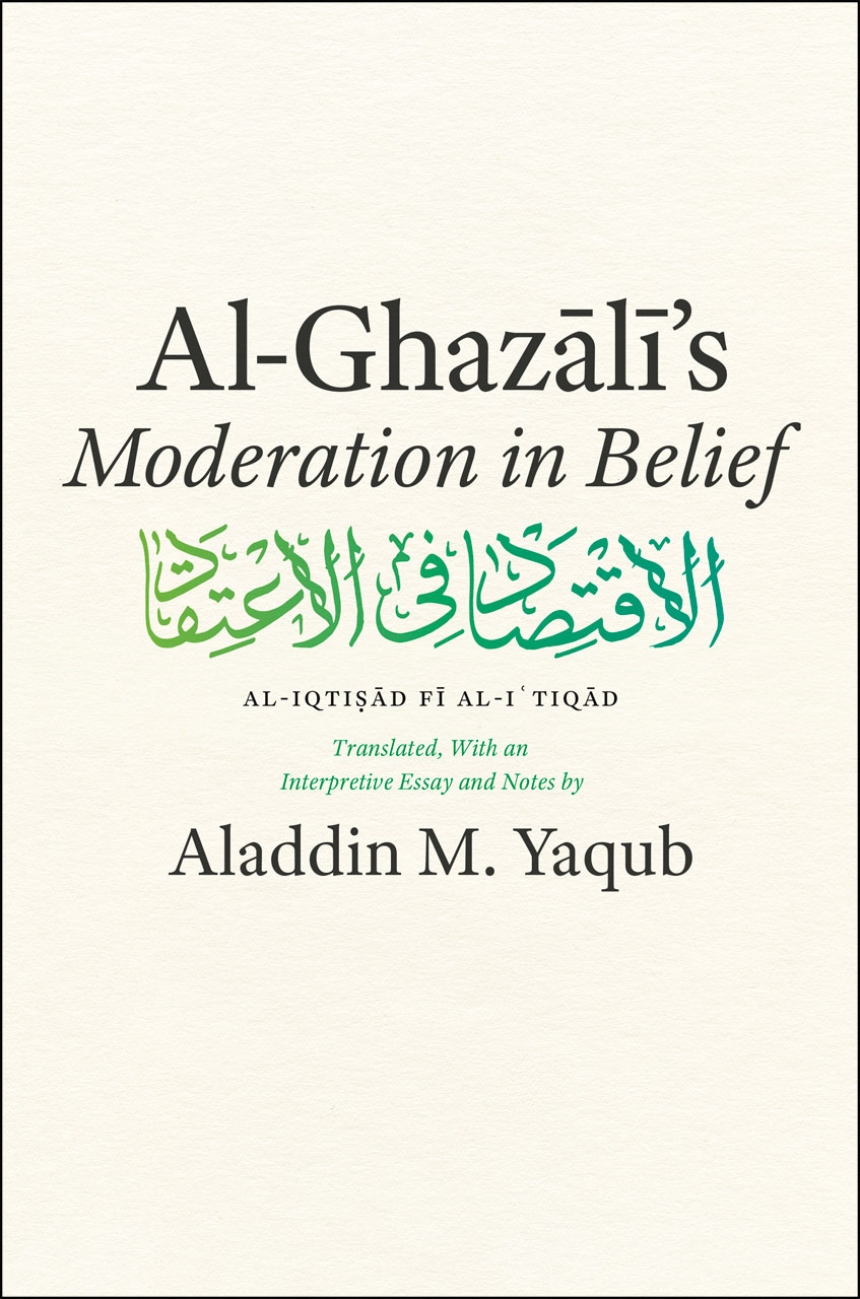 Translated by Aladdin M. Yaqub
Centuries after his death, al-Ghazali remains one of the most influential figures of the Islamic intellectual tradition. Although he is best known for his Incoherence of the Philosophers, Moderation in Belief is his most profound work of philosophical theology. In it, he offers what scholars consider to be the best defense of the Ash’arite school of Islamic theology that gained acceptance within orthodox Sunni theology in the twelfth century, though he also diverges from Ash’arism with his more rationalist approach to the Quran. Together with The Incoherence of the Philosophers, Moderation in Belief informs many subsequent theological debates, and its influence extends beyond the Islamic tradition, informing broader questions within Western philosophical and theological thought.
The first complete English-language edition of Moderation in Belief, this new annotated translation by Aladdin M. Yaqub draws on the most esteemed critical editions of the Arabic texts and offers detailed commentary that analyzes and reconstructs the arguments found in the work’s four treatises. Explanations of the historical and intellectual background of the texts also enable readers with a limited knowledge of classical Arabic to fully explore al-Ghazali and this foundational text for the first time.
With the recent resurgence of interest in Islamic philosophy and the conflict between philosophy and religion, this new translation will be a welcome addition to the scholarship.

“Aladdin M. Yaqub’s annotated translation of al-Ghazali’s Moderation in Belief will ultimately be seen as a major turning point—for the better—in the history of Islamic philosophy. He engages the text directly, his eyes riveted on the arguments, which he unravels and reconstructs elegantly.”

“Al-Ghazali is the most important philosophical theologian of classical Islam, and Moderation in Belief is among his most important works. It sets out al-Ghazali’s Ash?arite theology with unusual clarity and provides important background for such well-known works as his autobiographical Deliverance from Error and his attack on Avicenna in The Incoherence of the Philosophers. This first English-language translation, with notes that bring out the argumentation and background of the work, is thus very much to be welcomed.”

“Given the significance of al-Ghazali as one of the leading Muslim thinkers in the Sunni world, it’s remarkable that this important text has not yet been available in English-language translation in one place. Aladdin M. Yaqub provides such a translation, splendidly reconciling the Arabic texts and augmenting them with accurate notes that offer a helpful guide. This is sure to become the standard English edition.”

“Given his enormous influence on Islamic thought, this new translation of al-Ghazali's Moderation in Belief is indispensable for one who seeks to understand his theology. . . . As the first complete English translation of the work, Yaqub’s book represents a significant contribution for the non-Arabic speaker, [but] Arabic speaking audiences will also benefit from Yaqub’s scholarly documentation of the text.”

SECOND TREATISE
On the Divine Attributes

THIRD TREATISE
On the Acts of God

FOURTH TREATISE
First Chapter
On establishing the prophethood of our prophet, Mu?ammad

Third Chapter
On the Imamate
First Issue: On showing that appointing an imam is obligatory
Second Issue: On showing who among mankind may be appointed an imam
Third Issue: On explaining the belief of the followers of the Sunna regarding the Prophet’s companions and the rightly-guided caliphs