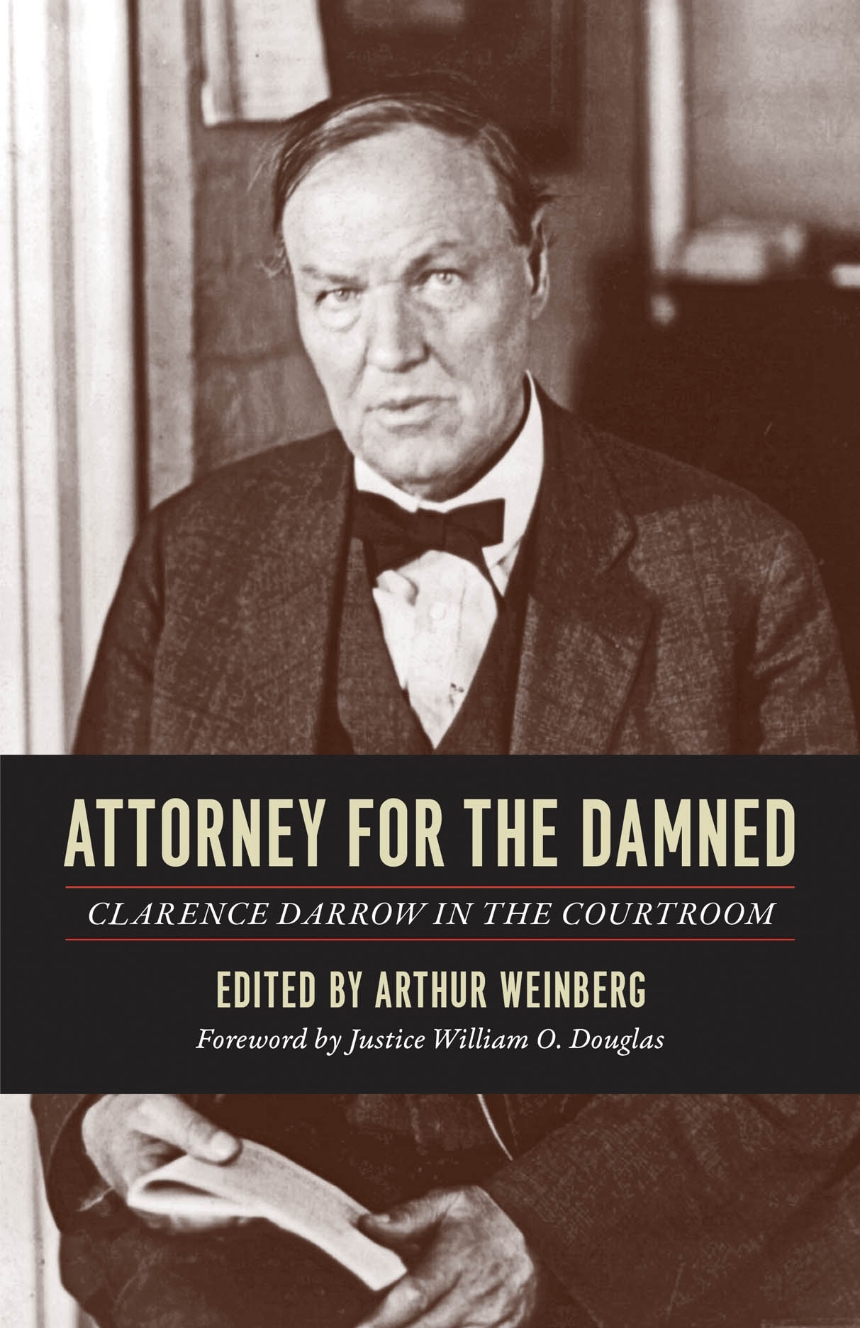 Attorney for the Damned

Clarence Darrow in the Courtroom

Attorney for the Damned

Clarence Darrow in the Courtroom

Edited by Arthur Weinberg
With a Foreword by Justice William O. Douglas
A famous defender of the underdog, the oppressed, and the powerless, Clarence Darrow (1857–1938) is one of the true legends of the American legal system. His cases were many and various, but all were marked by his unequivocal sense of justice, as well as his penchant for representing infamous and unpopular clients, such as the Chicago thrill killers Leopold and Loeb; Ossian Sweet, the African American doctor charged with murder after fighting off a violent, white mob in Detroit; and John T. Scopes, the teacher on trial in the famous Scopes Monkey Trial.
Published for the first time in 1957, Attorney for the Damned collects Darrow’s most influential summations and supplements them with scene-setting explanations and comprehensive notes by Arthur Weinberg. Darrow confronts issues that remain relevant over half a century after his death: First Amendment rights, capital punishment, and the separation of church and state. With an insightful forward by Justice William O. Douglas, this volume serves as a powerful reminder of Darrow’s relevance today.

"Clarence Darrow [was] perhaps the most effective courtroom opponent of cant, bigotry, and special privilege that our country has produced. All of Darrow's most celebrated pleas are here—in defense of Leopold and Loeb (1924), of Lieutenant Massie (1932), of Big Bill Haywood (1907), of Thomas Scopes (1925), and of himself for attempted bribery. The ghastly comedy of his deadpan interrogation of William Jennings Bryan on the origin of man in the Scopes case is particularly recommended."

“More illuminating as well as more dramatic than anything that has yet appeared about [Darrow].  The editor’s introductory notes … set the stage, introduce the actors and give the essential facts.  What follows is by the lawyer himself—‘Darrow in the raw,’ as Justice Douglas puts it . . .  ‘as fresh as the day he spoke’.”

“That Clarence Darrow was the great protagonist of that age, no one would deny. . . . In the present volume Mr. Weinberg wisely permits him to speak for himself."

"A truly timeless book.  This brilliantly edited collection captures the eloquence and the passion of Clarence Darrow.   Darrow’s insights about justice and society—on topics such as the death penalty, criminal responsibility, inequality, and the importance of labor—are as relevant today as when they were spoken.  Law students, lawyers, judges, and all who care about justice should read and reread this book."

"Attorney for the Damned is a volume that remains as relevant today as on the days Clarence Darrow delivered his powerful arguments. Substantively, Darrow presented a near-prophetic vision of justice and morality on many of the issues that continue to engender passionate debate. Rhetorically, Darrow’s arguments are the most fertile source available for those wishing to develop the skills of a great trial lawyer or simply to learn how to argue persuasively.  We would all be so much richer were Clarence Darrow alive today. Short of that, this volume keeps his spirit and essence alive in ways that allow us and future generations to continue to learn from his extraordinary battles."

“Clarence Darrow’s courtroom speeches feel as timely today as when he delivered them nearly a century ago. Each reads like a compelling narrative, each delivered to protect the unprotected, to right a wrong. Darrow was an American hero, someone who stood his ground -- with eloquence, wisdom and a clear sense of drama. Anyone grappling with the fissures in the American landscape should have this book on their shelves.”

Alex Kotlowitz | author of There Are No Children Here

"Thank goodness for court reporters, so we have these masterworks by Clarence Darrow, America’s Cicero. We should be even more grateful for Arthur Weinberg’s skilful edit and arrangement of these speeches – starting with Darrow addressing prisoners in Cook County Jail and ending with an address to keep himself out of prison. While Darrow was one of America’s greatest lawyers, and while this book is better than an entire college course in Rhetoric, I hope readers grasp that he was one of the great American writers – a writer whose work takes us to far darker places than most of our great writers dare to go.
This book can make you despair about the country, and cherish it for the brilliance and honesty of speeches like these."

Tom Geoghegan | author of The Secret Lives of Citizens

Part One - Against Vengeance

Crime and Criminals
Address, Chicago, 1902: Inmates of County Jail in Chicago get a lecture on revolutionary theories of crime.
The Crime of Compulsion
Leopold and Loeb, Chicago, 1924: Teen-age sons of two millionaires attempt the perfect crime—kidnaping and murder
Is Capital Punishment a Wise Policy?
Debate, New York, 1924: Darrow debates Judge Talley who challenged Darrow’s views on crime and capital punishment.
The "Unwritten Law"
The Massie Case, Honolulu, 1932: A strange and puzzling case, a study of psychology; kidnaping and murder because of honor

Freedom Knows No Limits
The Communist Trial, Chicago, 1920: Twenty members of the Communist Labor party are charged with "conspiracy to advocate the overthrow of the government by force."
You Can’t Teach That!
The Scopes Evolution Case, Dayton, Tennessee, 1925: Darrow meets William Jennings Bryan in the famous "Monkey Trial."
You Can’t Live There!
The Sweet Case, Detroit, 1926: A Negro family moves into a white neighborhood. A mob attempts to get them to move. One of the mob is killed. Dr. Sweet and friends are indicted for murder.

Somewhere There Is a Conspiracy
The Kidd Case, Oshkosh, Wisconsin, 1898: Kidd, a union organizer, is charged with conspiracy, growing out of a strike in the large sash-and-door factory in Oshkosh
Strike, Arbitration
Anthracite Miners,, Scranton and Philadelphia, Pennsylvania, 1903: Darrow represents the United Mine Workers’ union before President Theodore Roosevelt’s Anthracite Miner Commission, investigating conditions in the mines.
A Governor Is Murdered
Steve Adams, Wallace, Idaho, 1907; Haywood, Moyer and Pettibone, Boise, Idaho, 1907: Steve Adams, the prologue to the Haywood case. Haywood, first of three union leaders tried for the murder of ex-Governor Steunenberg; the confession of Harry Orchard and his story.

They Tried to Get Me
Darrow in his Own Defense, Los Angeles, 1912: Darrow is indicted and tried for attemped bribe of a juror in the McNamara case. He accuses his enemies as conspirators against his freedom.
John Brown 1800-1859
"One of the most purest and bravest and highest-minded patriots of any age."
John Peter Altgeld 1847-1902
"A lover of his fellow-men."
Sources
Selected Bibliography
Index