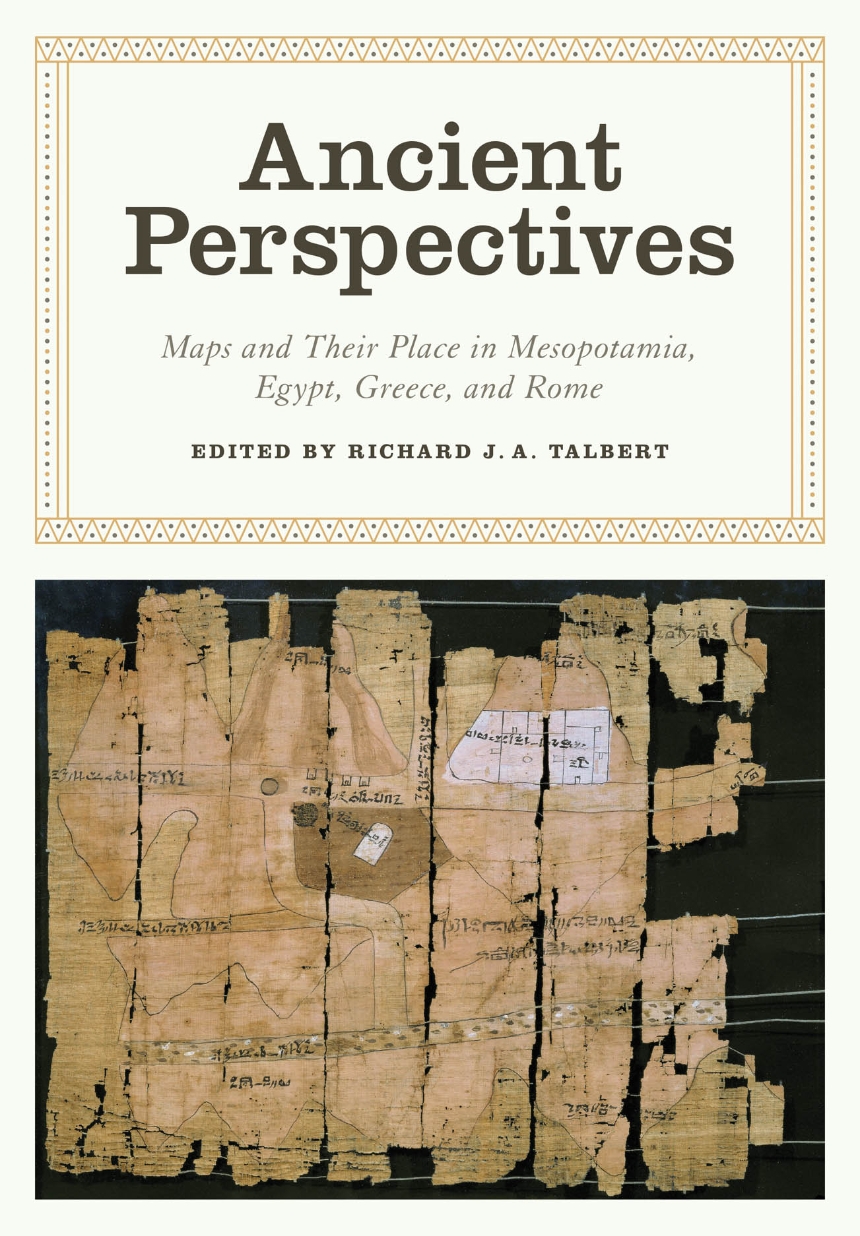 Maps and Their Place in Mesopotamia, Egypt, Greece, and Rome

Edited by Richard J. A. Talbert

Maps and Their Place in Mesopotamia, Egypt, Greece, and Rome

Edited by Richard J. A. Talbert

Ancient Perspectives encompasses a vast arc of space and time—Western Asia to North Africa and Europe from the third millennium BCE to the fifth century CE—to explore mapmaking and worldviews in the ancient civilizations of Mesopotamia, Egypt, Greece, and Rome. In each society, maps served as critical economic, political, and personal tools, but there was little consistency in how and why they were made. Much like today, maps in antiquity meant very different things to different people.

Ancient Perspectives presents an ambitious, fresh overview of cartography and its uses. The seven chapters range from broad-based analyses of mapping in Mesopotamia and Egypt to a close focus on Ptolemy’s ideas for drawing a world map based on the theories of his Greek predecessors at Alexandria. The remarkable accuracy of Mesopotamian city-plans is revealed, as is the creation of maps by Romans to support the proud claim that their emperor’s rule was global in its reach. By probing the instruments and techniques of both Greek and Roman surveyors, one chapter seeks to uncover how their extraordinary planning of roads, aqueducts, and tunnels was achieved.
Even though none of these civilizations devised the means to measure time or distance with precision, they still conceptualized their surroundings, natural and man-made, near and far, and felt the urge to record them by inventive means that this absorbing volume reinterprets and compares.

The Kenneth Nebenzahl Jr. Lectures in the History of Cartography

“This richly illustrated volume provides a sweeping yet engaging overview of cartography produced in the ancient civilizations of Mesopotamia, Egypt, Greece, and Rome, with examples spanning from the third millennium BCE to the fifth century CE. . . . The book will find a wide, interdisciplinary audience. Highly recommended. For specialists and nonspecialists alike.”

“Edited and introduced masterfully by Richard J. A. Talbert, [Ancient Perspectives] contains must-read essays for all those interested in the history of these earliest forms of cartography. . . . A truly wonderful read, and with its updated research and bibliography, [it] certainly represents one of most important additions to the scholarship on ancient cartography published in recent years. I could not recommend it more.”

“To read these essays is to see how far the study of ancient maps has come in the past three decades or so. The essays are both authoritative and accessible and will be the new starting point for any consideration of ancient map-mindedness. Anyone interested in ancient Mediterranean civilizations or in the history of geography will be in the authors’ debt.”

“Ancient Perspectives does not simply revise the last comprehensive, but largely traditional, study of early European and west Asian cartography in the light of the latest research, discoveries, and debates; for the first time, it puts what survives of early Mesopotamian, Egyptian, Greek, and Roman maps and related artifacts into their very different wider cultural contexts and reveals the diverse roles played by the maps in their very different societies. These roles often run counter to traditional assumptions and yet, in some respects, seem strangely familiar. Not the least achievements of the book are that they succeed in weaving the notoriously fragmentary surviving evidence into such a sophisticated, nuanced, persuasive, thorough, and convincing whole and that the book does so in language that is crystal clear and free of jargon. It represents scholarly communication at its very best.”

“Maps and their place in Mesopotamia, Egypt, Greece, and Rome have been studied for centuries, but the time is ripe for a new survey of up-to-date research on this fascinating subject. In this volume, internationally leading experts provide such a guide in seven chapters ranging from the Ancient Near East to the later Roman empire. By studying ancient perspectives the book opens up new vistas for fresh research on the history of cartography, making it a perfect addition to the Nebenzahl Lectures.”

“Nowhere has been mustered into one place so much new and critically examined, or reexamined, evidence from the beginnings of the historical record—from Mesopotamian clay tablets to late Roman monuments and texts—to dispel, once and for all, any lingering anachronistic myths about the enduring nature and scope of the human mapping impulse. Here is illuminated, sometimes brilliantly, always readably and in scholarly fashion, a range of contexts, subjects, perspectives, styles, orientations, functions, structures, and presentations of maps, whether concerning geographies of the ground or geographies for thought, that applies equally to all later history.”

by Richard J. A. Talbert

1. The Expression of Terrestrial and Celestial Order in Ancient Mesopotamia

3. Mapping the World: Greek Initiatives from Homer to Eratosthenes

by Richard J. A. Talbert

7. Putting the World in Order: Mapping in Roman Texts