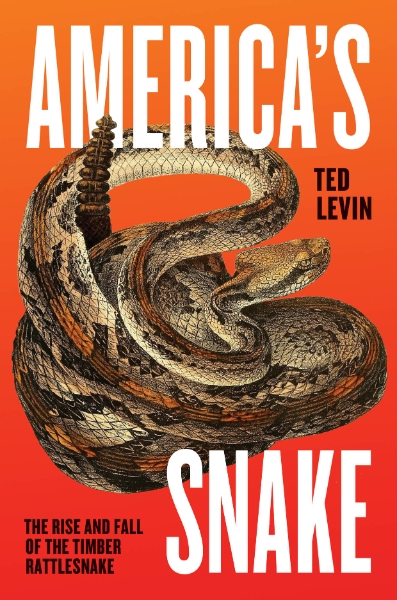 “I'm not sure I would have believed in advance that someone could write 500 fascinating pages about a single species of rattlesnake, but Ted Levin has done just that. America’s Snake is so engaging the reading borders on effortless; the writing is masterful, inspiring non-stop interest and confidence in Levin's scholarship. The book will be of interest to herpetologists and conservationists, as well as to everyone concerned with how we can live with dangerous animals.”–Harry Greene, author of Snakes

Read more about the book
Buy this book: America’s Snake
"Diamond Dave and the Porcupine Hollow"
An Excerpt from the Prologue to
America's Snake
The Rise and Fall of the Timber Rattlesnake
by Ted Levin

Because I think they are beautiful.

Why would Alcott Smith, at the time nearly seventy, affable and supposedly of sound mind, a blue-eyed veterinarian with a whittled-down woodman’s frame and lupine stamina, abruptly change his plans (and clothes) for a quiet Memorial Day dinner with his companion, Lou-Anne, and drive from his home in New Hampshire to New York State, north along the western rim of a wild lake, to a cabin on a corrugated dirt lane called Porcupine Hollow? Inside the cabin fifteen men quaffed beer, while outside a twenty-five-inch rattlesnake with a mouth full of porcupine quills idled in a homemade rabbit hutch. It was the snake that had interrupted Smith’s holiday dinner. Because of a cascade of consequences there aren’t many left in the Northeast: timber rattlesnakes are classified as a threatened species in New York and an endangered species everywhere in New England except Maine and Rhode Island where they’re already extinct. They could be gone from New Hampshire before the next presidential primary. Among the cognoscenti it’s speculated whether timber rattlesnakes ever lived in Quebec; they definitely did in Ontario, where rattlesnakes inhabited the sedimentary shelves of the Niagara Gorge but eventually died off like so many failed honeymoons consummated in the vicinity of the falls.

That rattlesnakes still survive in the Northeast may come as a big surprise to you, but that they have such an impassioned advocate might come as an even bigger surprise. Actually, rattlesnakes have more than a few advocates, both the affiliated and the unaffiliated, and as is so often the case, this is a source of emotional and political misunderstandings, turf battles and bruised egos. As you may have guessed already, Alcott Smith is a timber rattlesnake advocate, an obsessive really, who inhabits the demilitarized zone between the warring factions. How else to explain this spur-of-the-moment, four-hour road trip?

By the time Smith arrived, the party had been percolating for a while. Larry Boswell opened the door. As he spoke, a silver timber rattlesnake embossed on an upper eyetooth caught the light. Boswell owned the cabin and access to a nearby snake den, a very healthy one, where each October the unfortunate rattlesnake outside, following its own prehistoric biorhythms, had crawled down a crevice and spent more than half the year below the frost line dreaming snake dreams. Porcupines also favor sunny slopes, which likely is how the two met, one coiled and motionless and the other blundering forward. You’d think that after thousands of years of cohabitation on the sunny, rocky slopes of the Northeast, rattlesnakes and porcupines might have worked things out, but not so. No doubt, both animals instinctually took a defensive stance, and whether the snake struck and quills came out, or the startled porcupine lashed the snake with its pincushion tail, both had been severely compromised.

Without Smith’s help, the rattlesnake might have been doomed to starve as the quills festered. Ailing snakes die slowly, very slowly. One western diamondback is reported to have survived (and grown longer) in a wooden box for eighteen months without food and water, and a timber rattlesnake from Massachusetts lived twelve months (in and out of captivity) with its face consumed by a white gelatin-like fungus, a Quasimodo in the Blue Hills.

The cabin was small, dank, poorly lit. There wasn’t a sober individual in the group. Lou-Anne thought of Deliverance, and all evening she stood by the front door. Smith examined the snake and found fifteen quills embedded inside its mouth, which curled back a corner of the upper lip and perforated the margin of the glottis, gateway to the lungs, compromising both the snake’s breathing and its eating while protecting the outside world from the business end of the fabled, hollow (and grossly misunderstood) fangs. Essentially, the snake’s mouth had been pinned open.

Although this was a rattlesnake-tolerant (if not friendly) group, Smith wasn’t about to trust any of their less-than-steady hands to hold the animal. With imaginary blinkers on, Smith worked on a cleared-off coffee table in the middle of the cabin, with the overly supportive crowd keyed to every nuance. Smith gripped the head with one hand and pulled quills with the other, while the snake’s dark, thick torso sluggishly undulated across the coffee table. Slowly, methodically, he plucked each quill with a hemostat, and the men, who had tightened into a knot around the coffee table, cheered, toasted, chugged. After the last quill was pulled, the ebullient crowd roared approvingly, and the snake was returned to the hutch. Eight-years later, Lou-Anne, still jazzed by the potpourri of emotions, intensity, and images of that night, remembers feeling “relieved to have left there alive” as the couple returned home on the morning side of midnight.

The timber rattlesnake had been discovered several days before the tabletop surger y. Three of the unaffiliated herpetological adventurers — a couple from Connecticut and a man from northern Florida — had concluded an annual spring survey of the bare-bone outcrops behind the cabin. There, in the remote foothills above the shores of a narrow valley, where a wild brook strings together a run of beaver ponds, is one of the most isolated series of rattlesnake dens in the Northeast, perhaps in the entire country. (The word infested might come to more discriminatory minds.) For me, seeing those small, gorgeous pods of snakes basking in the October sunshine is stunning, a natural history right of passage, sort of like a bar mitzvah without the rabbi.

Beside the rattlesnakes, the trio found a fresh porcupine carcass in the rocks, unblemished, and on their way back down the mountain, they found the quilled snake, coiled loosely in a small rock pile one hundred fifty feet behind the cabin, last snake of the afternoon. The rock pile was at the base of a corridor, a bedrock groove in the side of the mountain that rattlesnakes use as a seasonal pathway from the den to the wooded shore and back. The cabin’s unkempt backyard is a veritable (and historic) snake thoroughfare. One of these three, a man who calls himself Diamondback Dave, thought he could pull the quills. Well known in the small, fervid circle of snake enthusiasts, Diamondback Dave maintains the website Fieldherping.com, where, among scores of photographs posted of himself (and a few friends) holding various large and mostly venomous snakes, you can view a full-frame picture of his bloody hand, the injury compliments of a recalcitrant banded water snake. You can also read synopses of field trips and random journalistic entries like this one:

I had a meeting with the director of a wildlife conservation society to discuss strategies on protecting rattlesnake populations in Eastern North America. What turned out was a weird combination of trespass warnings and a lengthy and unnecessary lecture on going back to school and finishing my degree, so that I could make 80,000 a year . . . welcome to the new age of Academic Wildlife Exploitation! . . . Business as usual.

Although in the spring of 2003, Diamondback Dave had never “pinned” a snake, a term that means immobilizing a venomous reptile’s head against the ground using any of a number of implements — snake hook, snake stick, forked branch, golf putter, and so forth — he convinced his two friends that he knew what he was doing. He did. Once the rattlesnake was pinned, Diamondback Dave directed his female companion to hold the body. Three visible quills protruded several inches from a corner of the snake’s mouth, fixed like miniature harpoons with their barbed tips. Dave’s efforts to pull them proved fruitless, however; not wanting to risk further injury to the snake, he released it.

On their way back to the car, they reported the incident to Boswell, who returned the following day and transferred the rattlesnake from rock pile to rabbit hutch. In his spare time, Boswell taught police officers and game wardens how to safely catch and relocate nuisance snakes, and he had been issued a permit by New York Department of Environmental Conservation (DEC) to harbor them on a temporary basis. This snake needed more than he could offer, though, so the next afternoon, Boswell phoned Alcott Smith.

After surgery, the timber rattlesnake recuperated in the hutch on Larry’s side of the bed. Three weeks later, when it was able to swallow a chipmunk, the snake was returned to the rock pile, where it immediately disappeared into a jumble of sun-heated stones. Today, the quilled snake can be found on Dave’s glitzy website among a host of other photographs. Just scroll down to the image labeled “Spike.”