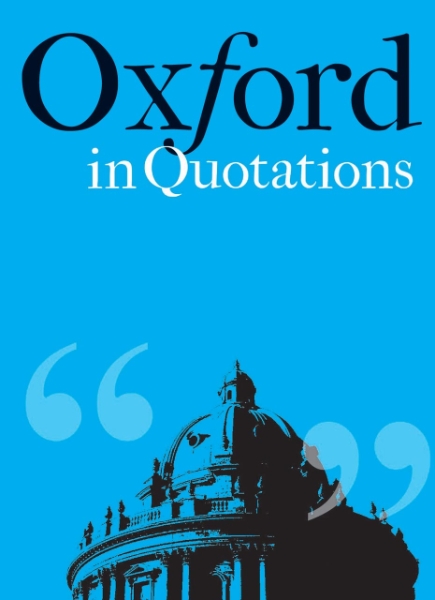 Oxford is one of the world’s great cities—a source of inspiration to generations of poets, novelists, journalists, and commentators who have visited or called it home. Be it praise or colorful invective, everyone, it seems, has something to say about the city and this slender volume—filled with wise, witty, and sometimes scandalous quotes—presents the full range of impressions it has made.

Read more about the book
Buy this book: Oxford in Quotations

“There are few greater temptations on earth than to stay permanently at Oxford in meditation, and to read all the books in the Bodleian.”
—Hilaire Belloc (1870–1953)

“At Oxford one was positively encouraged to take wine during tutorials. The tongue must be untied.”
—Christopher Hitchens (1949–2011)

“You spend your first term at Oxford meeting interesting and exciting people and the rest of your time there avoiding them.”
—Evelyn Waugh (1903–1966)

“To call a man a characteristically Oxford man is, in my opinion, to give him the highest compliment that could be paid to any human being.”
—William Gladstone (1809–1898)

“The world surely has not another place like Oxford; it is a despair to see such a place and ever to leave it, for it would take a lifetime and more than one to comprehend and enjoy it satisfactorily.”
—Nathaniel Hawthorne (1804–1864)

“I wonder anybody does anything at Oxford but dream and remember, the place is so beautiful. One almost expects the people to sing instead of speaking. It is all like an opera.
—William Butler Yeats (1865–1939)

“I was therefore entered at Oxford and have been properly idle ever since.”
—Jane Austen (1775–1817)

“Oxford is so beautiful still that only those who know her history are sensible of any loss.”
—E. A. Greening Lamborn (1877–1950)

“Tea in Oxford…is a manly affair.”
—A Manual for Prospective Rhodes Scholars, 1922

“The two great turning points in my life, were when my father sent me to Oxford, and when society sent me to prison.”
—Oscar Wilde (1854–1900)

“You will hear more good things on the outside of a stagecoach from London to Oxford than if you were to pass a twelvemonth with the undergraduates, or heads of colleges, of that famous university.”
—William Hazlitt (1778–1830)