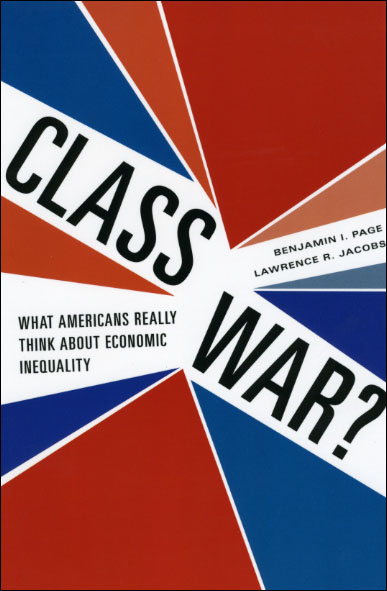 Data from the Inequality Survey

for Class War?: What Americans Really Think about Economic Inequality

by Benjamin I. Page and Lawrence R. Jacobs

Many of the data in Class War? come from the Inequality Survey of a representative sample of American adults, which was conducted for the authors in the summer of 2007.

The survey was conducted by telephone, between June 18 and July 8, by the Center for Survey Research and Analysis at the University of Connecticut (Samuel Best, director). The project coordinator was Chris Melchiorre, assisted by Chase H. Harrison. Interviews averaged approximately thirty minutes; the range was twenty to ninety minutes.

Respondents were selected by random digit dialing. The sampling frame was divided into four geographic regions: Northeast, North Central, South, and West. Quotas were set by these four areas based on population figures.

All data reported in the book are weighted. The sample component of the weight adjusts for differential probabilities of selection due to the number of adults in the household and the number of residential telephone lines which might have been included in the sample. Post-stratification weighting adjustments account for geography (census region), sex, age, level of educational attainment, Hispanic ethnicity, and race. Demographic characteristics were fitted using the iterative proportion fitting method. However, to improve the accuracy of overall estimates, sex, age, and education were entered in a single matrix. Since the sample was also proportionately stratified by geography, the impact of the geographic post-stratification adjustment was minimal but insured that other adjustments did not impact the stratification plan.

Because the sample was relatively small (n = 608), we can only be confident (at the p < .05 level) that estimates of population percentages around 50 percent are accurate to within about 4 percentage points. Very few of our findings are sensitive to this, however. On many of the issues we discuss, egalitarian policies were supported by 60 percent, 70 percent, or even 80 percent of those interviewed. Majorities of such magnitudes would be extremely unlikely to occur by chance due to sampling error.