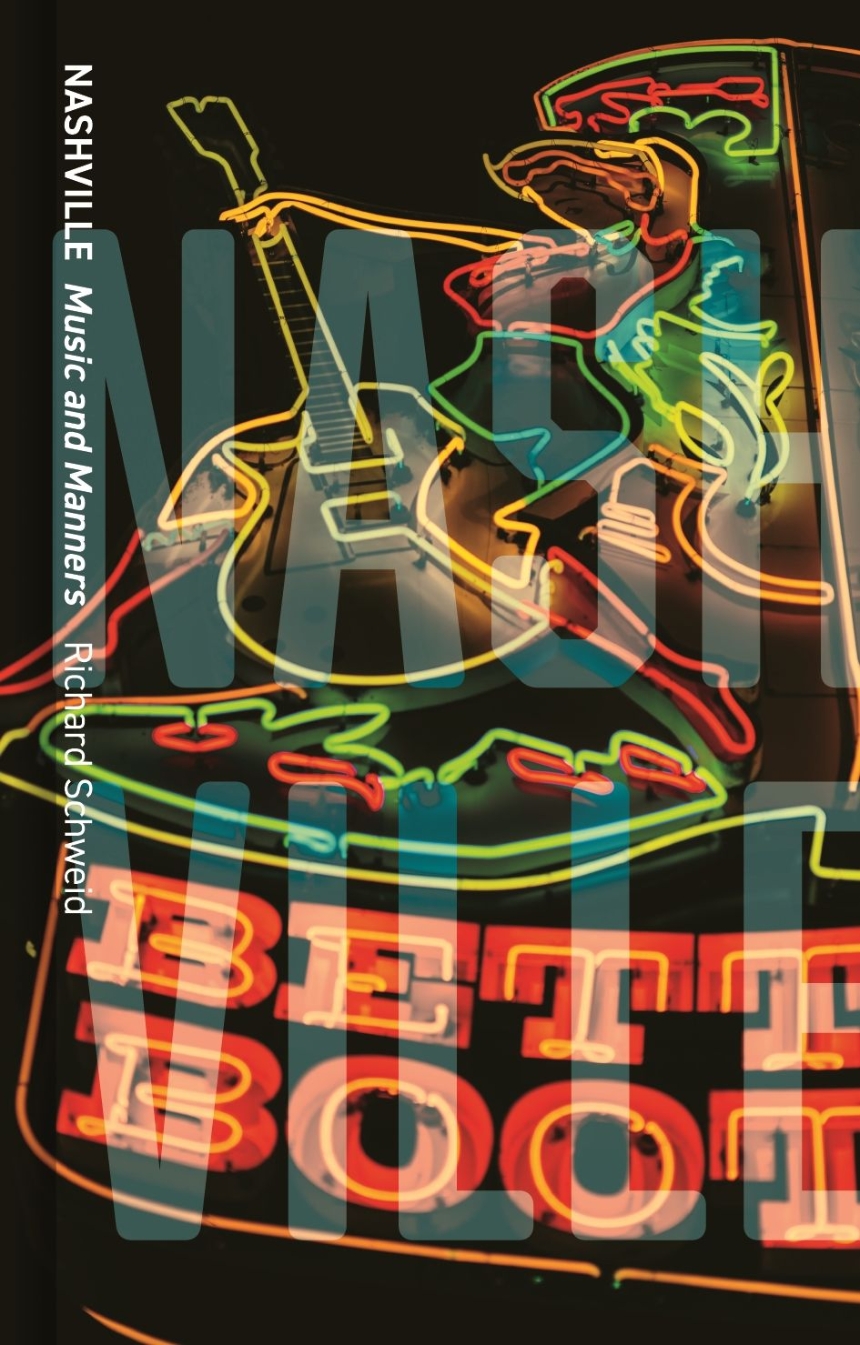 Nashville is a city of sublime contrasts, an intellectual hub built on a devotion to God, country music, and the Devil’s pleasures. Refined and raucous, it has long represented both culture and downright fun, capable of embracing pre–Civil War mansions and manners, as well as honky-tonk bars and trailer parks. Nouvelle cuisine coexists with barbeque and cornbread; the Frist Museum of Contemporary Art is near the Country Music Hall of Fame and Museum. Nashville has, in less than eighty years, transformed from a small, conservative, Bible-thumping city into a booming metropolis. Nashvillian Richard Schweid tells the history of how it all came to pass and colorfully describes contemporary Nashville and the changes and upheavals it has gone through to make it the South’s most exciting and thriving city.

"Schweid's entertaining and informative, with the kind of style that might be described as conversational, but that’s too facile. Conversations are rarely as agreeably structured as his prose. He’s also well-suited for this particular topic. A Nashville native and Hillsboro High graduate who now lives in Barcelona and Rhode Island, he brings to the table his own experience during some of Nashville’s turning-point years. . . . All that transformation is not without its tensions, he notes. '[S]ome Nashvillians worry that their city’s relaxed charm is imperiled by so much growth and development,' he writes. 'It is this struggle that defines the city today.' Ain’t that the truth."

“Authentic and insightful, Schweid’s new book chronicles how Nashville became America’s ‘It City,’ a hub of entertainment and culture—a place advocates of the New South never foresaw. A must-read for natives and visitors alike.”

For the centuries preceding the settlement of Nashville by Europeans, this Middle Tennessee landscape curving around a bend in the Cumberland River, and sheltered by seven adjoining hills, was known among Native American tribes for the riches of its woods and rivers. The area served as a regional breadbasket, hunted and fished by a number of tribes, including the Shawnee, Creek, Chickasaw, Cherokee, and Choctaw.

These tribes were not the original inhabitants of the Cumberland River basin. Before them had come the Mound Builders of the Mississippian Period, who are thought to have inhabited the area for centuries, from as early as 800 CE. Their history has been lost, however, and no one is sure why they disappeared so completely after about 1600. For decades, it was accepted that they had been nomadic, and not particularly developed, but recent archaeological discoveries seem to indicate that they organized sizeable cities. The Mississippians left behind few relics of their lives, but a great many related to their deaths: thousands of burial mounds across the Mississippi River network of territories, small hillocks rising above the landscape and holding the remains of their dead in stonelined burial sites, along with various objects, which had obviously been dear enough to the deceased for them to be carried into the next world.

Even before the Mississippian period, people inhabited Middle Tennessee. The Woodland period began from perhaps as long ago as 1000 BCE. The people of this period were generally nomadic tribes, moving with the seasons: traveling, hunting, and trading. Over the centuries, many tribes made the shift from hunter-gatherers to farmers, and their civilization blended into that of the Mississippian. As this change progressed, more and more tribal members formed permanent settlements, leaving behind their nomadic way of life.

While Mississippians left behind few material artifacts, what evidence we have points to a complex, highly organized culture and social hierarchy. These structures were overwhelmed and eventually obliterated by the European colonists. In many parts of the New World, indigenous populations were entirely exterminated by diseases carried from Europe, and those who survived often perished from a long-rifle bullet.

As more and more land in Middle Tennessee, and across the Southeast, fell under the plough, many of the Mississippian burial mounds were scraped away and flattened, dug up, tilled, and planted. In some cases, foundations were laid on top of the flattened mounds, and houses were built upon them. Any relics that were unearthed might be put in a box in an attic or a shed, if the ploughman had a shred of sense, or simply tossed out with everything else broken and useless. The bones that turned up would be ploughed over and reburied, or carted away with the dirt, no respect paid to the dead. In fact, Nashville was built on so many of these levelled mounds that to this day, some Native Americans refer to it as the City of the Dead.

What initially attracted Europeans, and probably the Native Americans as well, was a salt lick by the river at the heart of what is now Downtown. It attracted a lot of game. One early explorer noted that you could walk across the backs of buffalo there for long distances without touching the ground. Herds of bison were said to roam Middle Tennessee, following a trail to the salt lick that is thought to have been close to present-day Dickerson Pike.

Various tribes used the riverine highway formed by Ohio Valley rivers such as the Cumberland for hunting, trade, and war. Native Americans moved a wide variety of goods along these rivers in a busy commercial trade, which included furs, food, and decorative shells. In the eighteenth century, according to historian John Egerton,
it was understood among the various Indian tribes and the handful of French trappers and traders who ventured here that this park-like expanse of forest and streams could be hunted and fished by all, but possessed by none.
However, not everything was peace and harmony. The tribes warred among themselves over territory, and in around 1714 the Cherokee and the Chickasaw expelled the Shawnee from Middle Tennessee. In the first years of the eighteenth century, a French trader took advantage of the commercial traffic along the Cumberland, establishing a trading post near the salt lick, and the place became known as French Lick, later Nashville. In the eighteenth century, the area had a particular attraction for French explorers and settlers. A trader named Jacques-Timothe de Montbrun frequented French Lick and later changed his name to Timothy Demonbreun. His first residence was a cave in a bluff beside the Cumberland River. In 1788 he settled permanently in Nashville, where he ran a tavern, as well as buying and selling merchandise.

Jane Thomas, who came to Nashville in 1804, wrote in her memoir,
The first white man that ever lived in Nashville was named Demonbreun. He lived in a cave . . . There were two entrances to this cave, one on the river and one on the south side. He had three children born in the cave. He made his salt at the sulfur spring and hunted buffalo and deer that came there for water.
She was referring to a sulfur spring that was close by French Lick. The city’s springs were gradually filled in, including the sulfur spring. It was buried under the vast, brick, Werthan Bag factory, constructed along Eighth Avenue North and finished in 1905, but a faucet was installed at one side of the building, which spouted sulfurous water from the spring when it was opened. Longtime Nashvillians believed the water to have curative powers, and up until the twenty-first century, it was not unusual to see people pull up to the sidewalk—sometimes in long, fancy cars—and get out with empty jugs to fill. The factory closed in 1995, and was converted into expensive Downtown condominiums in 2010. The faucet was removed and the pipe bricked over, cutting the city’s last connection to the sulfur spring from which it sprang.

These low-lying springs of Jane Thomas’s day were bounded by steep limestone bluffs, which are the primary geological formation in Nashville. Today’s highways and interstates through the city are still bordered by these looming, layered, limestone bluffs. Caves abound. Two hundred million years ago, Middle Tennessee was covered by a shallow inland sea, and on the seabed were layers of shells. These formed the ubiquitous bluffs, tagging it with its nineteenth-century nickname: Rock City.

The novelist and historian Wilma Dykeman evoked pre-European Nashville:
This was limestone country to which the settlers and founders of Nashville came. Grasses and trees, animals and humans, the whole spectrum of life was influenced by this underlying foundation of the soil. Weather, too, played its role in the habitation of this place: extreme enough to permit the changing of the seasons but temperate enough to allow occasional mild interludes loosening winter’s grip and refreshing periods of coolness relieving summer’s heat.
The forests were the initial astonishment, as they had been in so many encounters with newcomers to the American land. Lofty, virgin, creating in their shade a sort of luminous green darkness even at midday, they dominated the landscape. To some of the settlers these forests represented “a howling wilderness” set in opposition to human civilization, a thing to be conquered and subdued as quickly as possible. To others, the forests were a welcome haven inviting exploration and understanding, a reserve to be used in the course of necessity and developing foresight.
In 1779 a small group of hunters and trappers made their way across the Great Smoky Mountains from North Carolina, led by James Robertson. At about the same time, John Donelson came by water, up the Cumberland River, and met with Robertson’s party at a spot initially called the Bluffs. A small stockade was erected beside the Cumberland River and christened Fort Nashborough, in memory of a Revolutionary War general, Francis Nash.

The area surrounding the palisades was tremendously rich in game. One early hunting party of settlers reported that in five days, they had killed 105 bears, 75 buffalo, and 87 deer. It was not long before the settlers had exploited these resources almost to extinction. By 1800, buffalo were rarely, if ever, seen around Nashville.

Some of the fort’s first residents lost their lives in the struggle to introduce the concept of private property to the indigenous tribes who had long considered this as common ground for the use of many and the ownership of none. They held that the rich land of Middle Tennessee belonged to everyone, in the same way as did air and water. The colonists wanted to divide it up among themselves. Gruesome atrocities were committed by both European settlers and Native Americans during the clash of cultures that erupted, including scalping, rape, and murder on both sides.