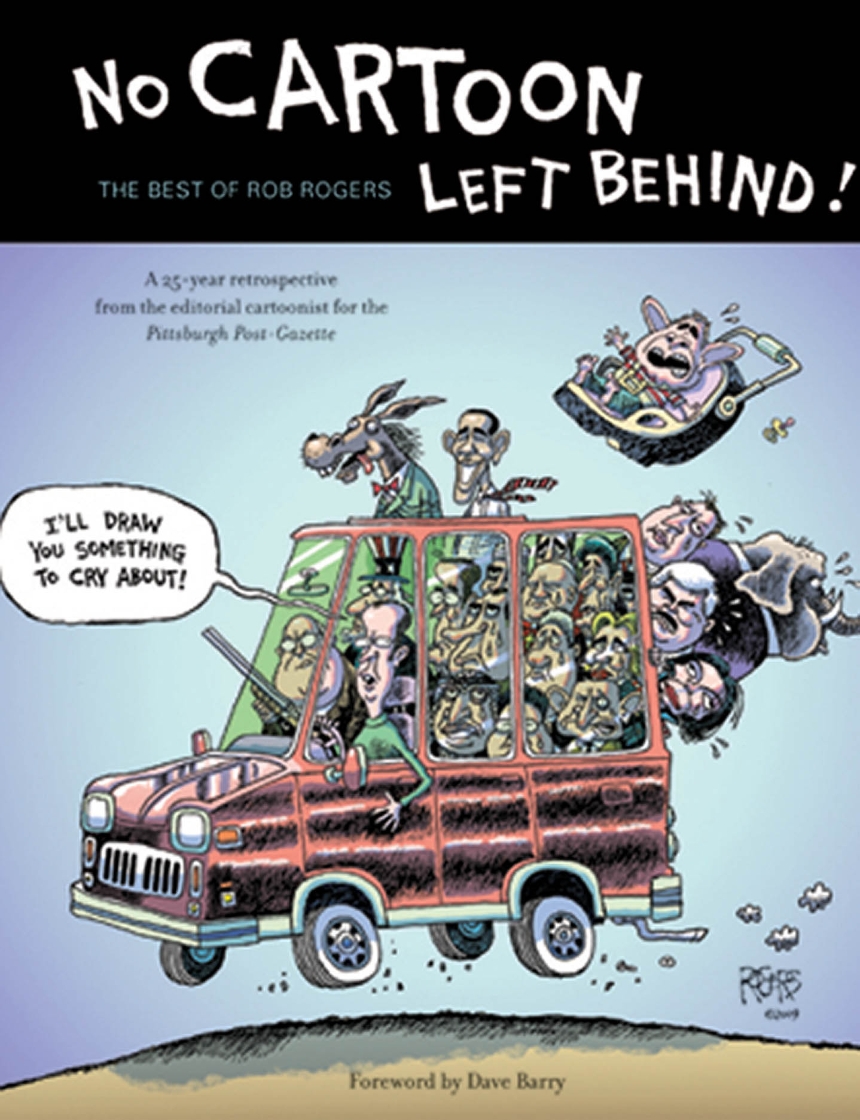 No Cartoon Left Behind

The Best of Rob Rogers

No Cartoon Left Behind

The Best of Rob Rogers

A 25-year retrospective from the editorial cartoonist for the Pittsburgh Post-Gazette. Political cartoonist Rob Rogers has covered some vast political terrain in the last quarter century. He has lampooned everything from Ronald Reagan’s shining city upon a hill, to George W. Bush’s shining moment on an aircraft carrier. From Bill Clinton’s place called Hope, to Barack Obama’s audacity of hope. From the Cold War, to the hot planet. One thing is clear. He isn’t done yet. No Cartoon Left Behind begins like every book should, at the beginning. In part one, Rogers shares his early influences and childhood drawings. He talks about how his successful physician father encouraged his art and illustrates the top ten reasons he didn’t go into medicine. Rogers gives the reader a rare look into his creative process by answering the frequently asked question: Where do you get your ideas? In part two of the book, Rogers jumps right into the thing editorial cartoonists love more than anything else: Presidential Campaigns. In the chapter called, "Where’s the Beef: Fear and Drawing On the Campaign Trail," Rogers shares his best cartoons from the seven of the elections he has covered, including Obama’s historic win in 2008. No Cartoon Left Behind is divided by subject matter, covering a diverse range of topics such as gun control, education, smoking, health care, pop culture, the Cold War, foreign affairs, women’s rights, racism, the environment and 9/11. Rogers, who began his career at the Pittsburgh Press in 1984, recounts every president he has had the pleasure of drawing, from Reagan to Obama. In "The Ears Have It: How To Draw George W. Bush Without Ending Up In Guantanamo," Rogers talks about the evolution of Bush’s ears. "In 1999, before I really knew much about Dubya," Rogers explains, "I drew his ears a normal size. Then, as his policies and attitude became bigger than life, so did his ears. It’s odd that someone with such big ears, even if they are cartoon ears, could be so deaf to the concerns of average Americans." In the introduction, Rogers describes the difficulty of balancing serious hardhitting commentary with something that will make the reader laugh. "Hockey player meets rodeo clown," he writes, "that’s how I would best describe the job I do. Some days I am checking politicians against the boards hard enough to make them organ donors. Other days it’s my job to step into an otherwise tragic environment wearing baggy pants, a red nose and giant clown shoes." In 1994, when Newt Gingrich led the Republican Revolution to win a majority in Congress, Rogers’ depiction of "How the Gingrich Stole Christmas" made the year-end cover of Newsweek magazine. Despite his liberal leaning, Rogers is not afraid to go after the Democrats as well. In 1999, after a compelling year of cartoons about Monica-gate and Bill Clinton’s impeachment, Rogers was a finalist for the Pulitzer Prize. No Cartoon Left Behind is not just another political cartoon collection. Rogers has created a unique history primer of the post-Cold War period as told through political cartoons. At the same time, he managed to create a memoir. In the book, Rogers recounts his humorous path to cartooning and his own personal perspectives on some of the major news stories and memorable images of the past two and a half decades. This book is a must-have for political junkies, history buffs, cartoon fans and people who only have forty dollars to spend on health care. After all, laughter is the best medicine.