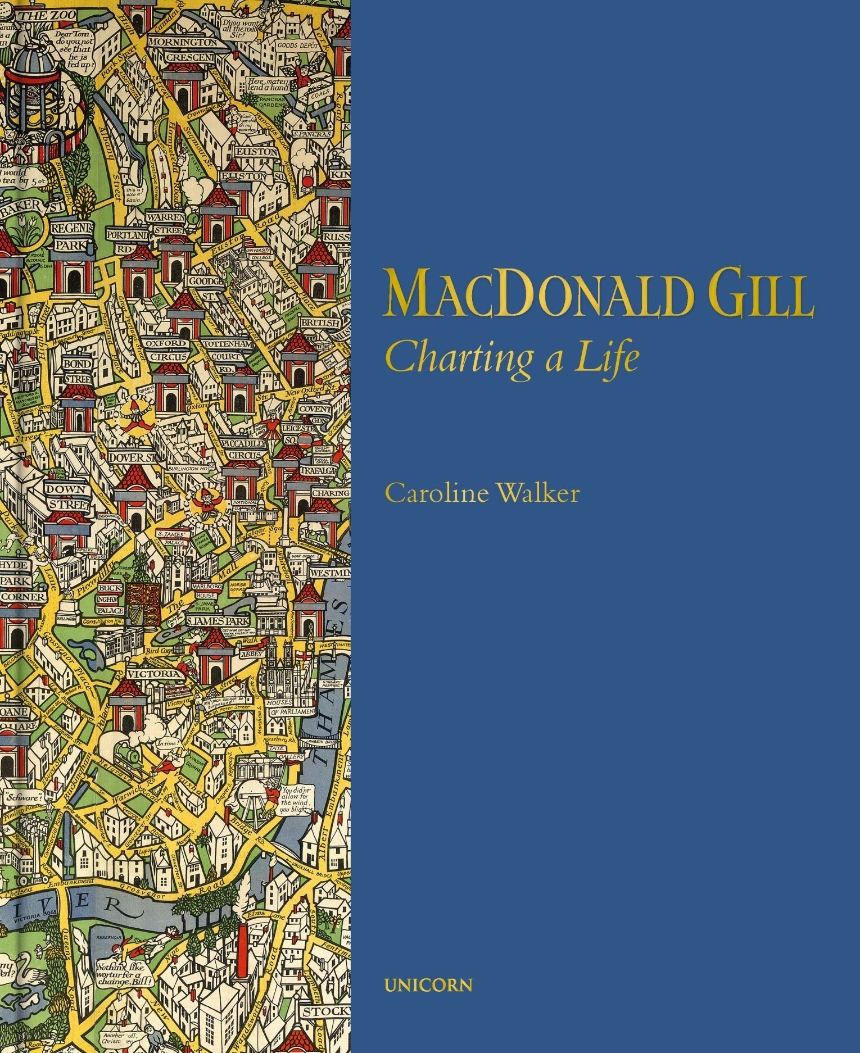 MacDonald “Max” Gill (1884–1947) was a renowned British architect, letterer, mural painter, and graphic artist of the early twentieth century. He is perhaps best known for his pictorial poster maps, including the whimsical 1914 “Wonderground Map,” which proved so popular with riders that it became the first London Underground poster to be sold commercially to the public and is today considered to have saved the network by increasing off-peak travel.

He enjoyed close links with many leading figures in the arts and crafts world, including the architects Sir Charles Nicholson, Sir Edwin Lutyens, and Halsey Ricardo; Edward Johnston, one of the fathers of modern calligraphy; Frank Pick, the British transport administrator who commissioned many icons of the London Underground’s identity; and his brother, the sculptor and typographer Eric Gill. Though his legacy is overshadowed by his controversial brother, MacDonald Gill was nevertheless a significant and influential artist of his time. Today, his painted panel maps decorate the Palace of Westminster and Lindisfarne Castle, and the alphabet he designed in 1918 is still used on the British military headstone.

With a four-decade career spanning two world wars, the decline of the British Empire, and countless innovations in communications technology, his work takes on heightened historical importance, as it reflects the remarkable events and developments of his era. Drawing chiefly from family archives, MacDonald Gill: Charting a Life is the first book to tell the story of this complex and talented man.

"MacDonald Gill is drawn out of his brother's shadow by a fine biography. Five stars."

"The first biography of 'Max' Gill reveals the versatile talent of an artist who was a master of lettering and murals and a standout mapmaker-artist. . . . Beautifully illustrated and clearly written, Caroline Walker’s book is an engaging study of an artist who came to maturity at the end of the nineteenth century and whose work partook of generous-spirited artistic ideals, formed at a time of accelerating globalisation. Gill's output was rooted in a deep love of the historic but it is also unmistakably of its time. He belongs to a rich chapter in the history of English art and design that is all too often overlooked in our enthusiasm for the rise of the adventurous but clinical modern, which (all too quickly) overtook it."

"Walker’s new biography finally accords [Gill's] diverse, four-decade-long career the canonical status it deserves. Dispelling the narrow view of cartography as an exclusively practical pursuit, Walker’s chronological history of Gill’s life and work asserts his status as an artist first and foremost. Born out of a career that spanned significant historical milestones—the advent of flight, the decline of empire, two World Wars, to name but a few—Gill’s oeuvre represents an important point of reference in modern British visual culture. . . . The biography succeeds in bringing the cartography of an extremely talented man to life."

"MacDonald Gill: Charting a Life certainly sets things straight and contains many such anecdotes as part of the author's mission to re-establish the standing of an artist which for too long has been as ephemeral as his posters. Handsome and densely illustrated, this satisfying tome is the culmination of 14 years’ research into Max Gill's life and work. . . . Deploying the obsessive zeal of a family historian and with a fondness for random detail, Walker has fashioned an engaging narrative to parallel this nicely illustrated visual chronology."

"One of the most original British map-makers working in the twentieth century. His maps display a distinctive, idiosyncratic vision of the world which has been much imitated but rarely equalled. . . . Walker’s biography is finally able to do true justice to the many aspects of this remarkable career, and there really is nobody better to write his story."