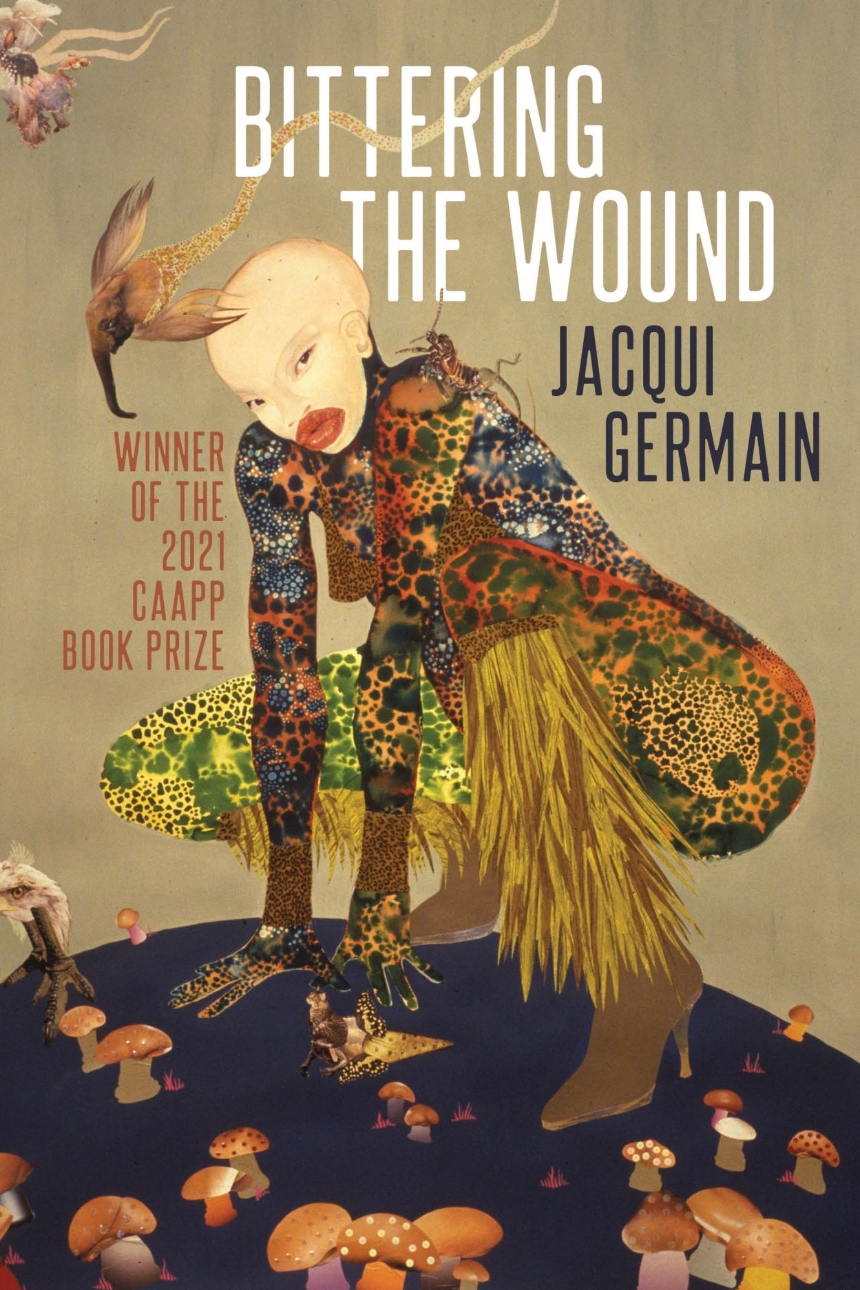 A firsthand account of the 2014 Ferguson uprising that challenges how we document and report on political unrest.

Jacqui Germain’s debut collection, Bittering the Wound, is a first-person retelling of the 2014 Ferguson uprising. Part documentation, part conjuring, this collection works to share the narrative of the event with more complexity, audacity, care, and specificity than public media accounts typically allow. Throughout the book, Germain also grapples with navigating the impacts of sustained protest-related trauma on mental health as it relates to activism and organizing. The book also takes occasional aim at the media that sensationalized these scenes into a spectacle and at the faceless public that witnessed them.

Bittering the Wound challenges the way we discuss, write about, and document political unrest. It offers fresh language and perspective on a historic period that reverberated around the world. Germain takes the reader through poems that depict a range of scenes—from mid-protest to post-protest—and personifies St. Louis with a keen and loving eye.

Bittering the Wound was selected by Douglas Kearney as the winner of the 2021 CAAP Book Prize.

“Every poem held me right where I was, a place also called the United States, but more specifically, in my Black life. And I am grateful to her for that, as grateful as I am for her harrowing actions in that city. Beyond gratitude, however, I feel astonishment for what she demands from her lines, from her sentences, the images she reels, the force of her skepticism, commitment, her love, that she makes it home in a place called the United States, that she won’t vanish before the headlights in her rearview do. . . . a singular work of poetry. I call it an unflinching lyric of living under brutal powers that insist 'Black life' is an oxymoron.”

Thine Eyes, Thine Eyes (for the street medics, trained and untrained)
On This Day
What We Purged Before the Fight
On Courting the Fire
For The Street That Held Us
By the Grace of the Gaze
What is Known as Paranoia or Maladjusted Self-defense
A List of Items Recovered from Protesters
Nat Turner Comes to the Highway Action
We Called It A ‘War’ Because It Was Useful or Alternate Names for Teargas
The Streetlights Christened Us Saved (or at least salvageable)
Flatland
On the Chemical Properties & Uses of Dried Blood
For the Hooked Knife
A Series of Proofs, Explained
Self-portrait Framed in Life Between Protests
Terrible and So, So Alive
How the Fires Got Misnamed
The One Where They Watch the Director’s Cut Because It Has an Edgier Ending
Self-portrait Standing in a Field of Text Messages, All Sent and All Blooming Unanswered
The Grill Shop as An Armory
Oh, the Love We Had Back Then Survived the Smoke
Homebound
All Ash, An Anointing
How to Make South Grand a Ghost Town
American Fear: Director’s Cut
Obscenities, But as A Prayer
Dripping Villanelle for the Burned Walgreens, QuikTrip, Prime Beauty, et al.
Ulcer (with footnotes)
I Bend and the Tender Joint Buckles (softly)
Kindling
It Didn’t Rain Much that August, But After
Pick One, It Says (in two parts)
Brick-made and Steady
STILL UNBUTTONED & UNBOTHERED: On Imagining That Freedom Probably Feels Like Getting the Itis