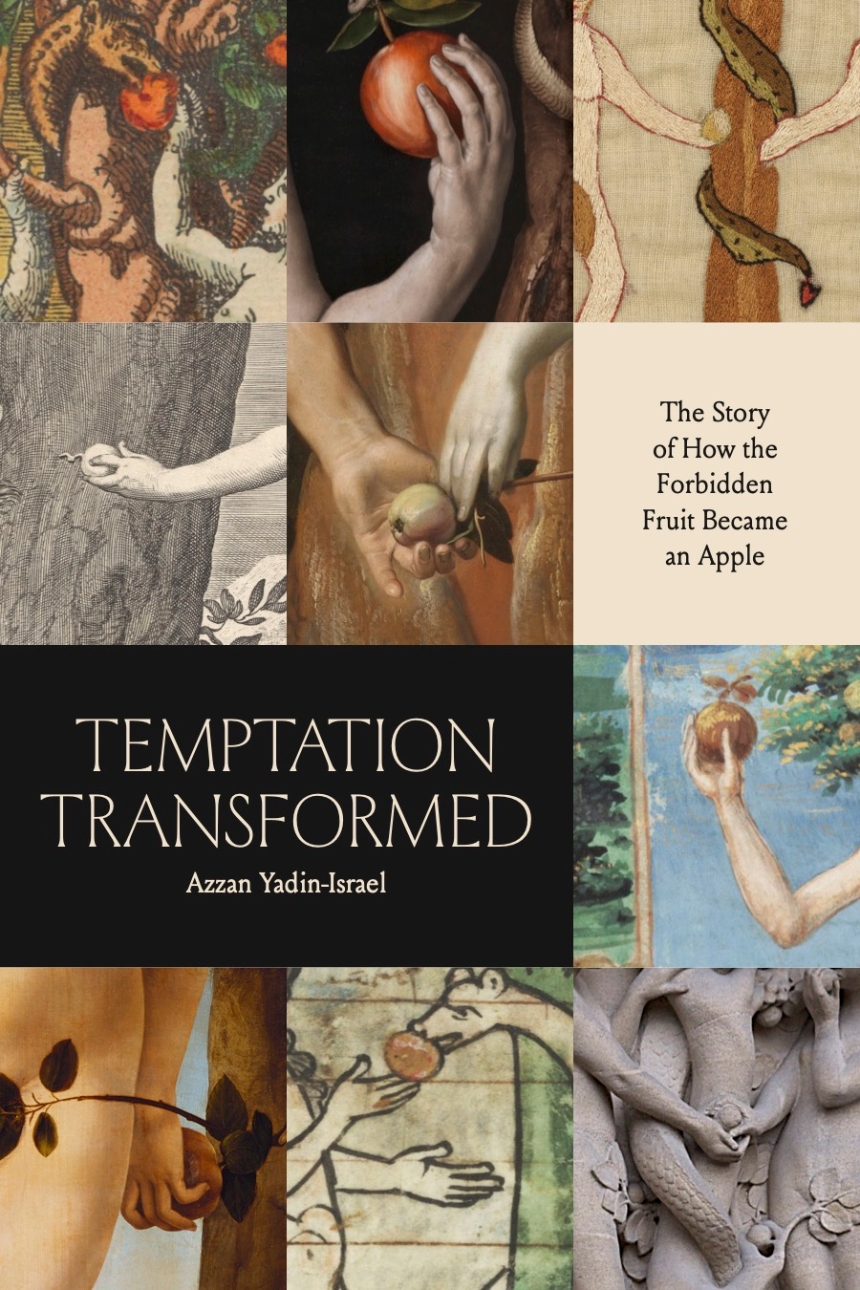 The Story of How the Forbidden Fruit Became an Apple

The Story of How the Forbidden Fruit Became an Apple

A journey into the mystery behind why the forbidden fruit became an apple, upending an explanation that stood for centuries.

How did the apple, unmentioned by the Bible, become the dominant symbol of temptation, sin, and the Fall? Temptation Transformed pursues this mystery across art and religious history, uncovering where, when, and why the forbidden fruit became an apple.

Azzan Yadin-Israel reveals that Eden’s fruit, once thought to be a fig or a grape, first appears as an apple in twelfth-century French art. He then traces this image back to its source in medieval storytelling. Though scholars often blame theologians for the apple, accounts of the Fall written in commonly spoken languages—French, German, and English—influenced a broader audience than cloistered Latin commentators. Azzan Yadin-Israel shows that, over time, the words for “fruit” in these languages narrowed until an apple in the Garden became self-evident. A wide-ranging study of early Christian thought, Renaissance art, and medieval languages, Temptation Transformed offers an eye-opening revisionist history of a central religious icon.

“If Genesis speaks only of the forbidden ‘fruit,’ how and when did that fruit become an apple? To answer, Yadin-Israel leads us from Genesis to the Song of Songs, through an iconographic survey worthy of Erwin Panofsky, into medieval languages, and even a brief history of apples in ancient and modern horticulture. This visual and literary masterpiece will serve as a methodological guide for future research, but its ultimate subject is nothing less than the pictorial representation of human sinfulness and the hope for redemption.”

James Kugel, author of 'The Bible as It Was'

“A fascinating cornucopia of insights from language, literature, and art history, Temptation Transformed offers the tantalizing fruit of rigorous textual and iconographic research into the identification of the forbidden fruit. Yadin-Israel provides compelling evidence for a new understanding of the development of the apple tradition in medieval France. I will use his historical insights every time I teach Genesis.”

John H. Walton, author of 'The Lost World of Adam and Eve'

“Temptation Transformed traces the rise of the forbidden fruit across centuries—from ancient Hebrew manuscripts to wall paintings and more. This is an engaging and beautiful book.”

Miri Rubin, author of 'Mother of God: A History of the Virgin Mary'

The Bible contains many mysteries, but the identity of the forbidden fruit, it seems, is not one of them. It is, by common consent, an apple, an identifica­tion that has freighted the apple with symbolic meaning like no other fruit. From Roz Chast’s New Yorker cartoon of the serpent temptingly informing Eve that “it’s a Honeycrisp!” to the feminine hands cradling a cardinal red ap­ple on the cover of Stephenie Meyer’s Twilight, the apple is everywhere the sym­bol of forbidden knowledge and temptation.

Of course, common consent is not proof that the Book of Genesis in­tended an apple. In fact, there are compelling reasons to assume otherwise. The apple does not appear in the Fall of Man narrative, nor anywhere else in the Hebrew Bible, undoubtedly because the grafting technique essential to apple cultivation was not known in ancient Israel. Furthermore, the ascent of the apple is relatively recent; for centuries, the preferred forbidden fruits were the fig and the grape, along with other less prominent species. How, then, did the apple become the most popular forbidden fruit?

This book aims to answer that question . . .

The biblical Fall of Man narrative appears in the second and third chapters of the Book of Genesis. God creates Adam and places him in the Garden of Eden, enjoining him to eat of all the trees save for the Tree of Knowledge of Good and Evil and the Tree of Life. God then creates Eve as Adam’s companion, and they “were both naked, and were not ashamed” (Gen 2:25). This idyll, alas, is short-lived. The serpent promptly enters, and successfully entices Eve to eat the fruit of the Tree of Knowledge. She then gives the fruit to Adam, who eats as well. Immediately, “the eyes of both were opened, and they knew that they were naked; and they sewed fig leaves together and made loincloths for themselves” (Gen 3:7). The account is concise, just two verses for the divine prohibition (Gen 2:16–17) and seven for the human transgression (Gen 3:1–7).The Book of Genesis does not identify the offending fruit, calling it peri, the generic Hebrew word for “fruit.” The major ancient translations of the Bible follow suit. The Greek Septuagint has karpos, “fruit,”3 as do the two ancient Latin translations (fructus). The earliest Aramaic translation, Targum Onkelos, likewise uses a generic Aramaic term for “fruit.” Neither the Book of Genesis nor its earliest translators, then, identify the species of the forbidden fruit. As often happened, ancient commentators took biblical silence as an invitation to fill in the lacuna. As we will now see, none thought to identify the fruit as an apple. Instead, we find two major interpretive traditions, that of the grape and that of the fig.

Outside of Genesis, the earliest account of the Garden of Eden is found in 1 Enoch, a Jewish apocalyptic text, parts of which date as far back as the third century BCE. At its center stands Enoch, the biblical character who met an unusual end: “Enoch walked with God; then he was no more, because God took him” (Gen 5:24). On the authority of this verse, later readers understood Enoch to have ascended to heaven, where he was shown apocalyptic visions and given knowledge of divine secrets. According to the “Book of the Watchers,” the earliest component of 1 Enoch, while in Paradise Enoch saw a tree

"in height like the fir, and its leaves like (those of ) the carob, and its fruit like the clusters of the vine—very cheerful; and its fragrance penetrates far beyond the tree. Then I said, 'How beautiful is the tree and how pleasing in appearance.' Then Gabriel, the holy angel who was with me, answered, 'This is the tree of wisdom from which your father of old and your mother of old, who were before you, ate and learned wisdom. And their eyes were opened, and they knew that they were naked, and they were driven from the garden.'" (1 Enoch 32:5–6)

This tree is an amalgam: as tall as a fir tree, with round carob-like leaves, and fruit—the forbidden fruit—that resemble a cluster of grapes. The author eschews clear botanical terms (the components of the tree are only like familiar plants), but describes the forbidden fruit as most closely resembling the grape.

Another heavenly-ascent text in the grape tradition is the first-century CE Greek Apocalypse of Baruch, also known as 3 Baruch, which survives in Greek and Church Slavonic recensions. Baruch, the scribe of the biblical prophet Jeremiah, ascends to heaven and learns that different angels planted fruit trees in the Garden of Eden: Michael the olive, Gabriel the apple, Uriel the nut, Raphael the quince, and Satanael the grapevine. When Baruch asks to see “the tree through which the serpent led Eve and Adam astray,” his angelic guide responds, “[It is] the vine, which Satanael planted” (3 Baruch 4:8). Here, once again, the forbidden fruit is the grape.

The grape is also the source of Adam and Eve’s sin in a third heavenly-ascent narrative, the Apocalypse of Abraham, a work dating to the first or second century CE. In it, Abraham narrates his ascent to heaven, where he witnesses the Fall of Man:

"And I saw there a man very great in height and terrible in breadth . . . entwined with a woman who was also equal to the man in aspect and size. And they were standing under a tree of Eden, and the fruit of the tree was like the appearance of a bunch of grapes of vine. And behind the tree was standing, as it were, a serpent in form... and he was holding in his hands the grapes of the tree and feeding the two whom I saw entwined with each other." (Apocalypse of Abraham 23:5–8)

This scene captures the drama of the Fall of Man, with the serpent feeding Adam and Eve the forbidden fruit, a grape.
None of these works explains why the forbidden fruit is a grape, though 3 Baruch offers a possible clue in its vehement denunciation of the grape because of its association with wine. For “men drinking insatiably the wine which is begotten of it make a transgression worse than Adam, and become far from the Glory of God, and commit themselves to the eternal fire. . . .  Through the calamity of wine come into being all [these]: murders, adulteries, fornications, perjuries, thefts, and such like.” (3 Baruch 4:16–17)

Perhaps antipathy to wine makes grapes the forbidden fruit; perhaps it is the numerous biblical pronouncements against wine and drunkenness—some specific to the priesthood (Lev 10:9) and others more general (Prov 23:20–21). The role wine plays in the sexual impropriety of Noah (Gen 9) and Lot (Gen 19) may also have contributed to the identification of the grape as the forbidden fruit in these heavenly-ascent sources.