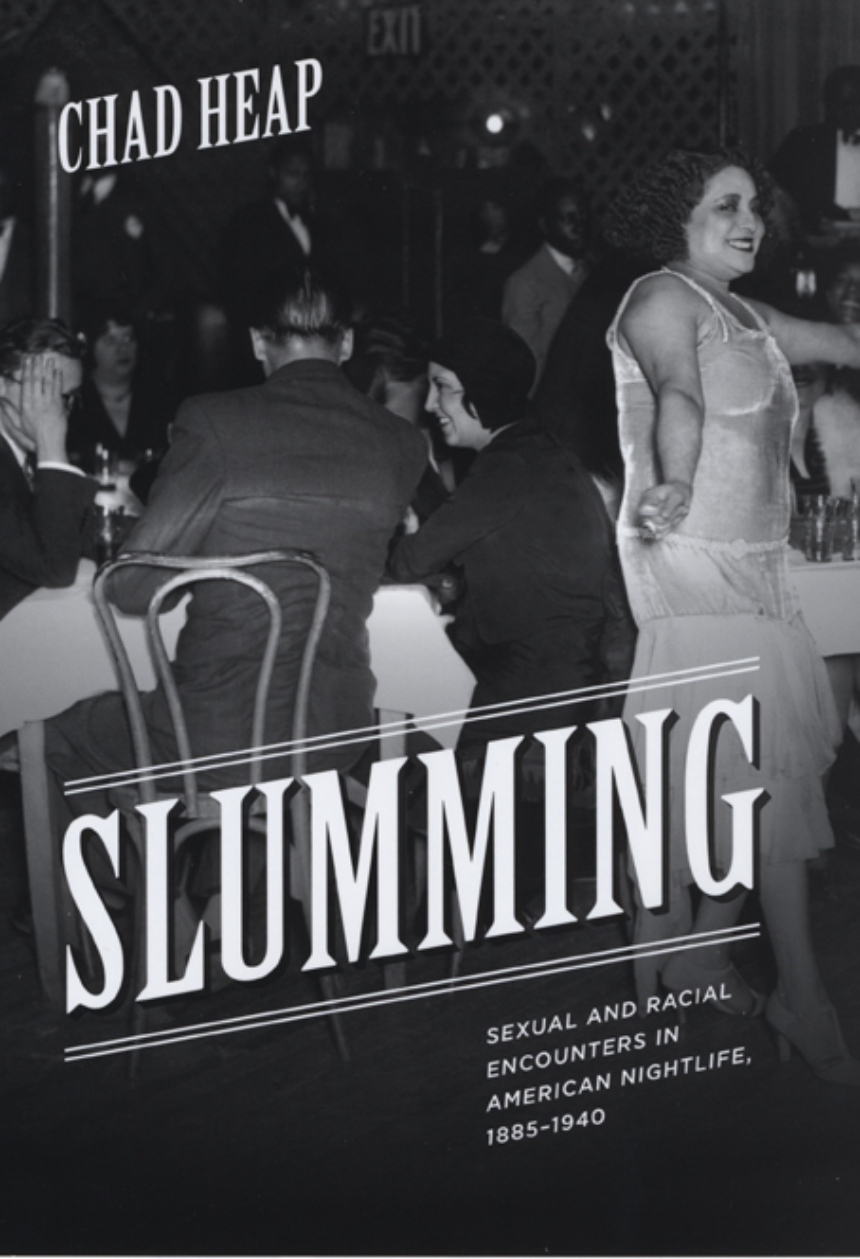 During Prohibition, “Harlem was the ‘in’ place to go for music and booze,” recalled the African American chanteuse Bricktop. “Every night the limousines pulled up to the corner,” and out spilled affluent whites, looking for a good time, great jazz, and the unmatchable thrill of doing something disreputable.
That is the indelible public image of slumming, but as Chad Heap reveals in this fascinating history, the reality is that slumming was far more widespread—and important—than such nostalgia-tinged recollections would lead us to believe. From its appearance as a “fashionable dissipation” centered on the immigrant and working-class districts of 1880s New York through its spread to Chicago and into the 1930s nightspots frequented by lesbians and gay men, Slumming charts the development of this popular pastime, demonstrating how its moralizing origins were soon outstripped by the artistic, racial, and sexual adventuring that typified Jazz-Age America. Vividly recreating the allure of storied neighborhoods such as Greenwich Village and Bronzeville, with their bohemian tearooms, rent parties, and “black and tan” cabarets, Heap plumbs the complicated mix of curiosity and desire that drew respectable white urbanites to venture into previously off-limits locales. And while he doesn’t ignore the role of exploitation and voyeurism in slumming—or the resistance it often provoked—he argues that the relatively uninhibited mingling it promoted across bounds of race and class helped to dramatically recast the racial and sexual landscape of burgeoning U.S. cities.
Packed with stories of late-night dance, drink, and sexual exploration—and shot through with a deep understanding of cities and the habits of urban life—Slumming revives an era that is long gone, but whose effects are still felt powerfully today.

“Exhaustively researched and beautifully written, Chad Heap’s investigation of slumming as an urban mass phenomenon gives us a vivid and astonishingly detailed account of the black and tans, bohemian tearooms, and pansy and lesbian nightclubs where the cultural boundaries of race and sexuality were crossed, tested, and recast in the early twentieth century.”

“Slumming is a sophisticated, engaging work of American social and cultural history, an important book that will appeal to a very wide scholarly and popular audience. It is well-written, carefully crafted and structured, with a powerful set of arguments sure to reorient our understandings of sexuality, race, leisure, nightlife, urban geography, and modernity. Heap’s assertions are bold, his anyalysis subtle and convincing—and on top of that, Slumming is a really good read, lively and satisfying.”

"’Slumming’ is the concept of people seeing ’how the other half lives.’ People went slumming either as an academic pursuit or with prurient interests, or both. Beginning in the 1880s with white males visiting prostitutes or gamblers in the working-class and immigrant neighborhoods in New York’s Harlem and Chicago’s Bronzeville, slumming extended to middle-class whites visiting these areas, usually in the company of a police officer, as a new form of recreation spurred by curiosity and desire. Heap sees four phases of slumming in this fascinating, readable, but hardly titillating history. The red light phase ran from the 1880s to WW I, which overlapped the bohemian phase during the 1910s and 1920s. The Negro phase, perhaps the best known in popular imagery, ran through the 1920s and 1930s, overlapping and succeeded by the pansy/lesbian phase, which continued through the 1940s. Throughout, Heap highlights his monograph with detailed accounts of black and tan cabarets, tearooms, and rent parties that broadened the perspectives of both visitors and residents. . . . Recommended. All levels/libraries."

“[An] enthralling history. . . . assiduously parsed, perhaps to mitigate the inherent titillation of the material.”

“This is a beautiful book that will be a milestone in our understandings of sexuality, race, normalcy, and metropolitan American modernity.”

Chapter 1
Into the Slums
The Spatial Organization, Cultural Geography and Regulation of a New Urban Pastime

Chapter 3
Adventures in the Slums and Red-Light Districts

Chapter 4
The Search for Bohemian “Thrillage”

Chapter 5
The Negro Vogue
Excursions into a “Mysterious Dark World”

Chapter 6
The Pansy and Lesbian Craze in White and Black