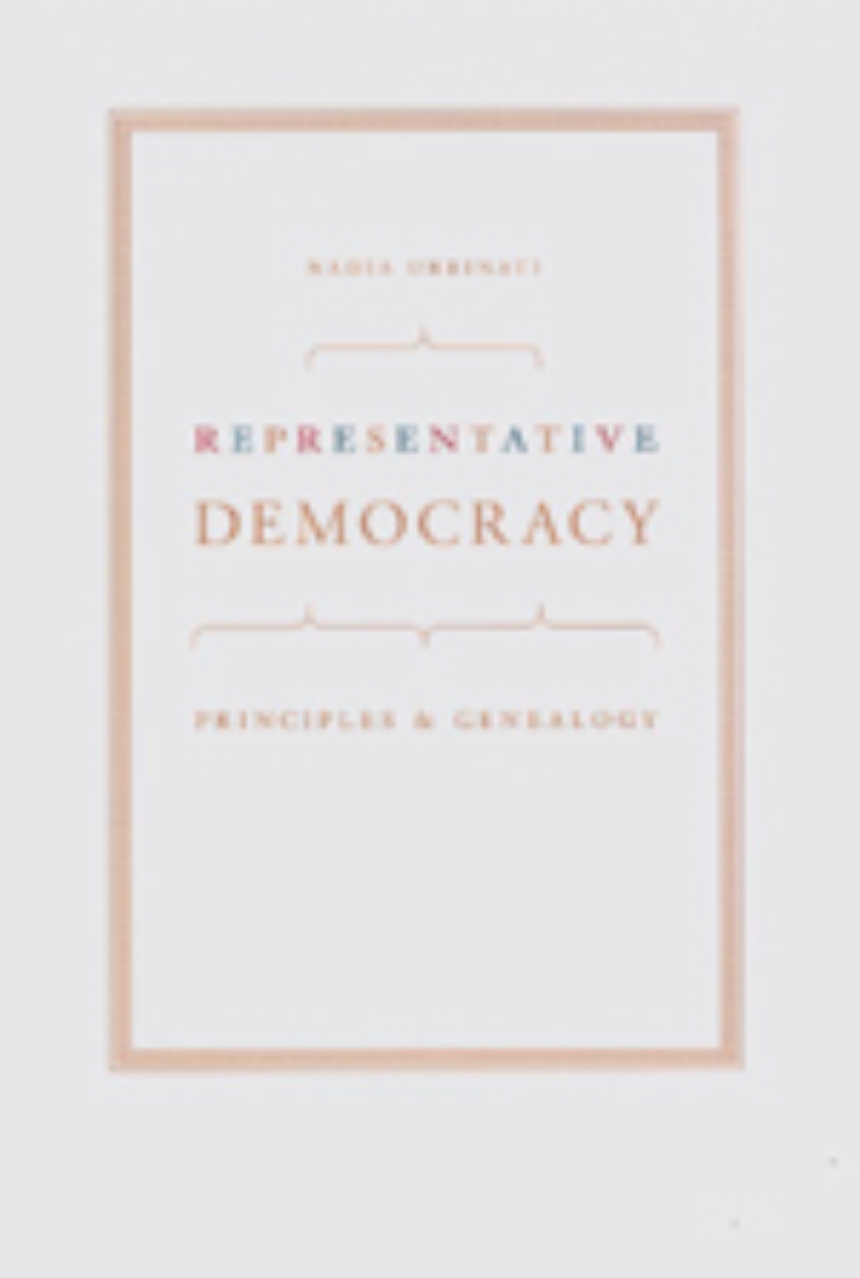 It is usually held that representative government is not strictly democratic, since it does not allow the people themselves to directly make decisions. But here, taking as her guide Thomas Paine’s subversive view that “Athens, by representation, would have surpassed her own democracy,” Nadia Urbinati challenges this accepted wisdom, arguing that political representation deserves to be regarded as a fully legitimate mode of democratic decision making—and not just a pragmatic second choice when direct democracy is not possible.
As Urbinati shows, the idea that representation is incompatible with democracy stems from our modern concept of sovereignty, which identifies politics with a decision maker’s direct physical presence and the immediate act of the will. She goes on to contend that a democratic theory of representation can and should go beyond these identifications. Political representation, she demonstrates, is ultimately grounded in a continuum of influence and power created by political judgment, as well as the way presence through ideas and speech links society with representative institutions. Deftly integrating the ideas of such thinkers as Rousseau, Kant, Emmanuel Joseph Sieyès, Paine, and the Marquis de Condorcet with her own, Urbinati constructs a thought-provoking alternative vision of democracy.

"The work combines sound scholarship in the history of ideas with a convincing analytical approach. . . . A book that takes rightfully its place in a triptych next to the works of Hannah Pitkin and Bernard Manin."

"In this clear, comprehensive, and compelling rehabilitation of representative democracy, Nadia Urbinati argues that, contrary to prevailing views, representation is not a ’defective substitute’ for direct democracy."

"Urbinati provides an excellent and carefully researched overview of the historical origins of modern democratic thought. This is recommended reading for anyone interested in the origins and functions of democratic representation and makes the book worthwhile reading even apart from Urbinati’s own contribution to contemporary democratic theory. At the same time  this historical analysis grounds an analytically rigorous theory of modern representative democracy that is significant in its own right."

1. Representation and Democracy
Representation in Democratic Theory and History
Three Theories of Representation
Continuity, Rupture, and People’s Negative Power
Discord and the Ballot, or Presence through Speech and Ideas
Partisanship as an Active Manifestation of the General
Proportional Fairness and the Dual Nature of Equality
Advocacy
Representativity
Rethinking Popular Sovereignty

2. The Unrepresentable Sovereign
Either Delegates or Representatives
Sovereign Unity: Symbiotic or Symbolic?
Two Models of Unification
The Sovereignty of the Will
A Privatistic Model of Delegation
The Travel Agent and a Minimalist Participation
Imagination, Speech, and Deception
The Deliberative Judgment of the Few
Asking the Right Question
Paradoxes of Minimalism
Reflection and the Rule of Immediacy
The Time and Space of Politics and the Paradox of a Punctuated Freedom

3. Will and Judgment
Freedom from the Externality of the Presence
The Subterranean Work of Informal Sovereignty
Individual Atoms in a Participatory Void
The Soft Power of Judgment
Ideology and the Representing Faculty of Imagination
The Fiction of As If
Genres of Judgment
Political Dependence
Sensus Communis and the Revolution

4. A Nation of Electors: Representative Government as Electoral Democracy
All Human Relations Are Representative
Interest and Competence as Unifying Factors
Exchange versus Barter: Democracy Is Primitivism
The Currency of Electoral Consent
The Metamorphosis of the Citizen into the Elector
Passive and Active Freedom
The Symbolic Sovereignty of the Nation
The Impolitical Category of Competence

6. A Democratic Model of Representative Government
The Longue Durée of the Democratic Project in the Age of Representation
Perpetual Innovation versus Immediate Politics
The Secularization of Origins: Democracy as a Time-Regime
Indirect Despotism
The Syllogism of Democratic Constitutionalism
Democratic Moderation and the Principle of Collegiality
Democratizing Deliberation
Multiplying the Times and Places of Deliberation
A Cooperative Enterprise
Primary Assemblies and the Special Terrain of Politics
Sovereignty of Surveillance
Breaking and Restoring Trust
Conclusion: A Surplus of Politics
Notes
Bibliography
Index
Back to top