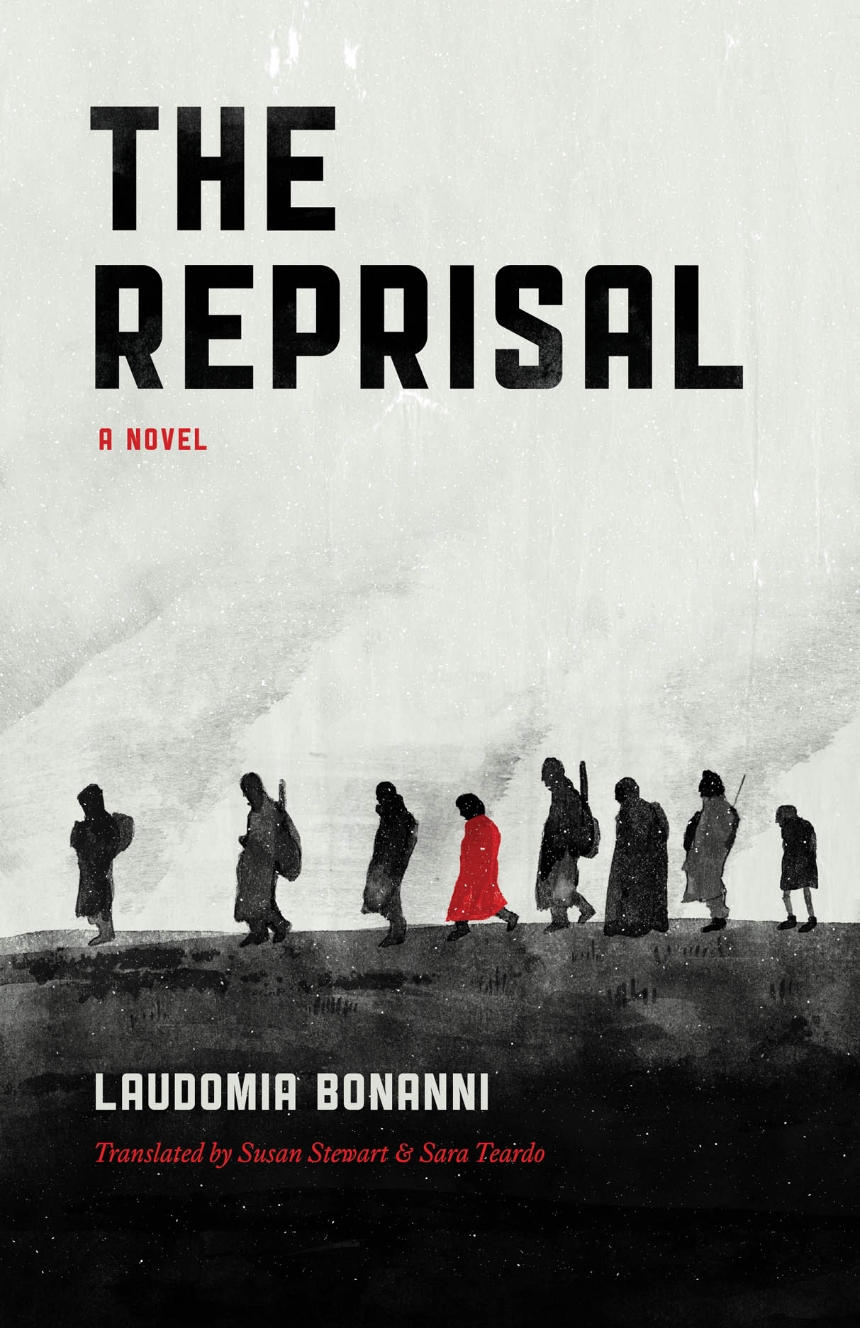 Translated by Susan Stewart and Sara Teardo
In the bitterly cold winter of 1943, the Italian countryside is torn apart by violence as partisans wage a guerilla war against the occupying German army and their local fascist allies. In the midst of this conflict, a ragtag group of fascist supporters captures a woman in the late stages of pregnancy. Suspecting her of being in league with the partisans, they hastily put her on “trial” by improvising a war tribunal one night in the choir stalls of the abandoned monastery that serves as their hide-out. This sham court convicts the woman and sentences her to die—but not until her child has been born. When a young seminarian visits the monastery and tries to dissuade the fascist band from executing their sentence, the absurd tragedy of the woman’s fate is cast in stark relief. The child’s birth approaches, an unnerving anticipation unfolds, and tension mounts ominously among the characters and within their individual psyches.
Based on a number of incidents that took place in Abruzzo during the war, Laudomia Bonanni’s compact and tragic novel explores the overwhelming conflicts between ideology and community, justice and vengeance. The story is embedded in the cruel reality of Italian fascism, but its themes of revenge, sacrifice, and violence emerge as universal, delivered in prose that is at once lyrical and brutal.
In her native Italy, Bonanni, a writer of journalism and critical prose as well as fiction, is hailed as one of the strongest proponents of post-war realism, and this is the first of her novels to be made available to Anglophone readers. Translators Susan Stewart and Sara Teardo render Bonanni’s singular style—both sparse and emotive, frank and poetic—into readable, evocative English.

“The Reprisal is a starkly haunting and disturbing novel, stylistically and thematically innovative; its English translation should be of interest to contemporary feminist criticism of all stripes, students and scholars of the Italian novel, neorealism, Fascism, and the literature of World War II. Laudomia Bonanni’s novel, completed in 1985, was only published in Italy posthumously, in 2003.  Now, The Reprisal and Bonanni can assume their rightful place in the canon of Italian novels about the war and resistance, along with authors such as Italo Calvino, Natalia Ginzburg, Carlo Levi, Primo Levi, Cesare Pavese, Elio Vittorini, and Elsa Morante. In this eloquent and accurate translation,  Susan Stewart and Sara Teardo provide a  welcome rehabilitation of one of the most penetrating portrayals of cruelty and poverty under the conditions of war, and of the deep wellspring of strength of female archaic resistance.”

“I have before me the book of an unknown woman, Laudomia Bonanni. This work emerged from a competition and won a prize for literature. I am wary of such prizes, but I must admit there are exceptions and this Laudomia truly deserves to be brought out from the shadows. She reveals a narrative strength that must not conclude here. She is sure to go a long way.”

“Bonanni’s tragic, brutal novella is exquisitely translated for the first time by poet Stewart and scholar Teardo. . . . Bonanni’s surreal and grotesque scenes make the madness of the men, and their primordial misogyny, graphically palpable. It is a travesty that English language readers have been denied this profound, gritty novel for so long as it raises serious questions about humanity’s ability to justify violence.”

“Laudomia Bonanni’s The Reprisal, available in English translation for the first time thanks to the University of Chicago Press, is a disorienting, confusing novel, and all the more successful for it.  Initially rejected by Bonanni’s publisher in 1985 . . . this novel could have become any number of others instead, or so easily could have not existed at all. It occupies—perhaps especially in translation—a rich liminal space appropriate to its recounting of difficult-to-pin-down events. . . . Bonanni’s purposes seem to be moral as much as aesthetic, as well as gendered: a driving force here is a no-punches-pulled critique of the warmongering of men. . . . Bonanni simultaneously undercuts the presumptuous foolishness of such masculine schemes and offsets that with a certain sympathy toward these men, who have been overwhelmed by and swept up in global events so much larger than their own village lives—yet she never lightens the load of culpability for their own actions. That uncomfortable, unresolvable balance makes The Reprisal a challenging, bleak, and haunting read—and a vital one.”

A Note on the Translation

Acknowledgments
The Reprisal: A Novel