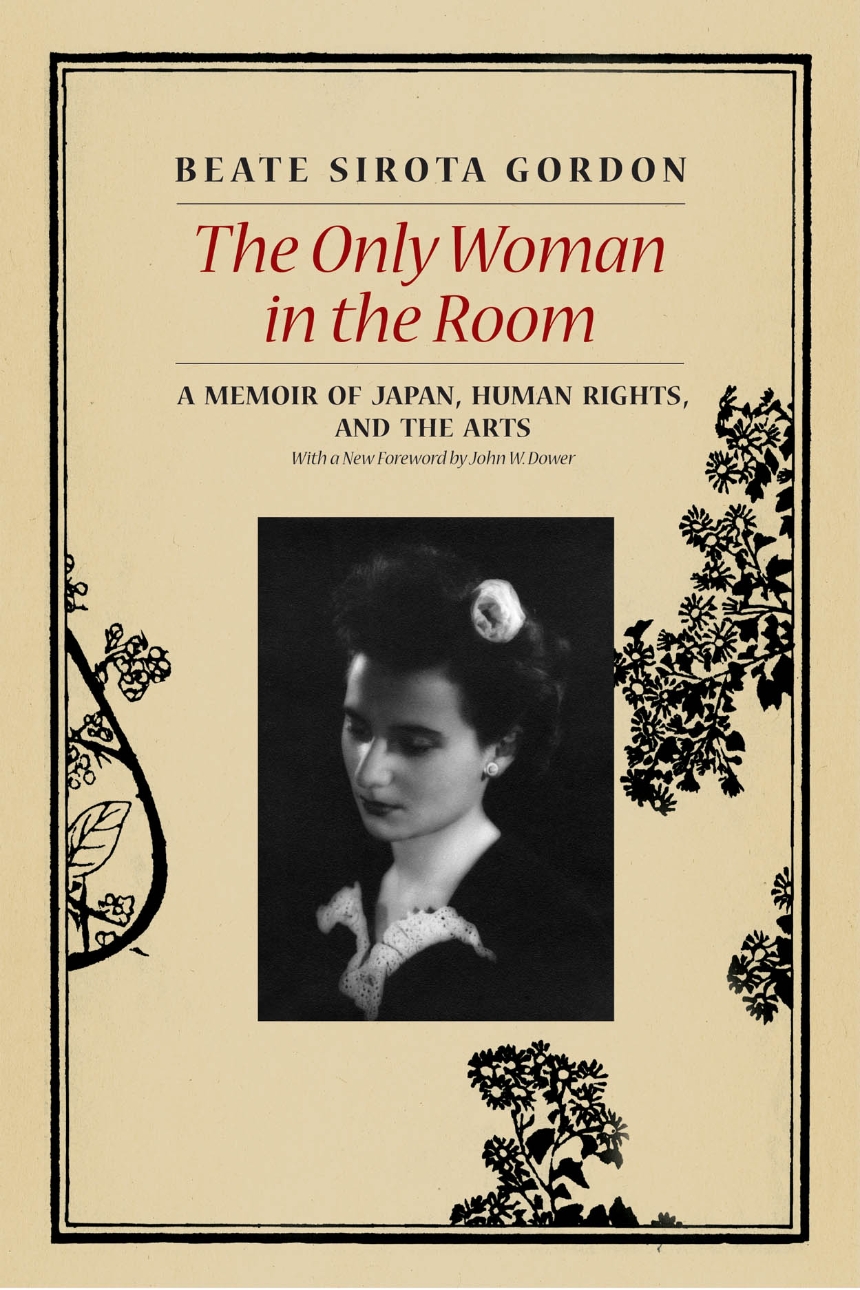 The Only Woman in the Room

A Memoir of Japan, Human Rights, and the Arts

The Only Woman in the Room

A Memoir of Japan, Human Rights, and the Arts

With a new Foreword by John W. Dower, a new Afterword by Nicole A. Gordon, and an Elegy by Geoffrey Paul Gordon
In 1946, at age twenty-two, Beate Sirota Gordon helped to draft the new postwar Japanese Constitution. The Only Woman in the Room chronicles how a daughter of Russian Jews became the youngest woman to aid in the rushed, secret drafting of a constitution; how she almost single-handedly ensured that it would establish the rights of Japanese women; and how, as a fluent speaker of Japanese and the only woman in the room, she assisted the American negotiators as they worked to persuade the Japanese to accept the new charter.

Sirota was born in Vienna, but in 1929 her family moved to Japan so that her father, a noted pianist, could teach, and she grew up speaking German, English, and Japanese. Russian, French, Italian, Latin, and Hebrew followed, and at fifteen Sirota was sent to complete her education at Mills College in California. The formal declaration of World War II cut Gordon off from her parents, and she supported herself by working for a CBS listening post in San Francisco that would eventually become part of the FCC. Translating was one of Sirota’s many talents, and when the war ended, she was sent to Japan as a language expert to help the American occupation forces. When General MacArthur suddenly created a team that included Sirota to draft the new Japanese Constitution, he gave them just eight days to accomplish the task. Colonel Roest said to Beate Sirota, “You’re a woman, why don’t you write the women’s rights section?”; and she seized the opportunity to write into law guarantees of equality unparalleled in the US Constitution to this day.

But this was only one episode in an extraordinary life, and when Gordon died in December 2012, words of grief and praise poured from artists, humanitarians, and thinkers the world over. Illustrated with forty-seven photographs, The Only Woman in the Room captures two cultures at a critical moment in history and recounts, after a fifty-year silence, a life lived with purpose and courage. This edition contains a new afterword by Nicole A. Gordon and an elegy by Geoffrey Paul Gordon.

“Five Stars. [Sirota-Gordon’s] remarkable memoir details . . . how as a young woman she rose to meet the challenge of reshaping a country from scratch. . . . The real heart of the book is the week of Sirota Gordon’s work on the Constitution. . . . This chapter forms the crux of the memoir and her life, and I reread it multiple times, fascinated by the insider’s view of writing the Constitution and at the accomplishment and determination of a 22-year-old. Today, Sirota Gordon’s historic effort on the Constitution is particularly poignant, as lawmakers continue to debate Article 9 and the peace clause. Prime Minister Shinzo Abe enrages pacifists with his mandate to ‘seek a more active role’ in collective self-defense. Other lawmakers, buoyed by Article 9’s candidacy for the Nobel Peace Prize, insist on supporting Japan as a peaceful nation. Despite its timely importance, however, the memoir does not carry a political agenda. The reverberations of that one week in February 1946 when Sirota Gordon worked on the Constitution echo throughout the work, and make you wonder: If a 22-year-old young woman, cultured and pampered so much that she did not know how to make her own bed at 15 years old, can overcome political pressure and 20-hour work days in that frenzied week to create a constitution that ensured rights for women and education, then perhaps each of us, too, has the potential to push for peace.”

“Honest, plain and straightforward—written not by a professional author but an extremely well-bred, cultured woman who had forged a career for herself in a time when women—even in America—were expected to marry, have babies and sink themselves in domestic bliss. Or just sink. . . . Though her tone is consistently soft and modest, her voice is clearly her own—and when it’s time to stand up for the Japanese and their rights, she apparently didn’t give an inch. What an ally the Japanese had in Beate. . . . Beate wasn’t a saint nor interested in being one. Without meaning to, she came pretty close. Her prose is never condescending, nor does it brim with self-congratulations as in the case of many memoirs. . . . What culminates from her memoirs is her selflessness. Helping others, being fair, and maintaining a striking modesty in spite of her many accomplishments were the defining factors of Beate’s life.”

“Gordon’s personal story will enlighten all who question the importance of women’s presence in the corridors of power.”

“Gordon’s death has unearthed her legacy promoting gender equality for all women. Let’s hope it stays in the light.”

“A warm, colorful, haunting, and thoroughly entertaining memoir of an enviably rich and adventure-filled life. What a story!”

“. . . A woman with the courage to match her convictions.”

“A prime example of truth being stranger and at the same time more coherent than fiction. . . . Spellbinding.”

“Brimming with wisdom, sophistication and energy.”

“Gordon provides an evocative portrait, carefully and tenderly recording the evanescent world of her parents in privileged, prewar, expatriate Tokyo society on the eve of its demise as well as giving us a glimpse of the newly emerging and hopeful order of democratic, postwar Japan.”

Chapter 3. The House in Nogizaka