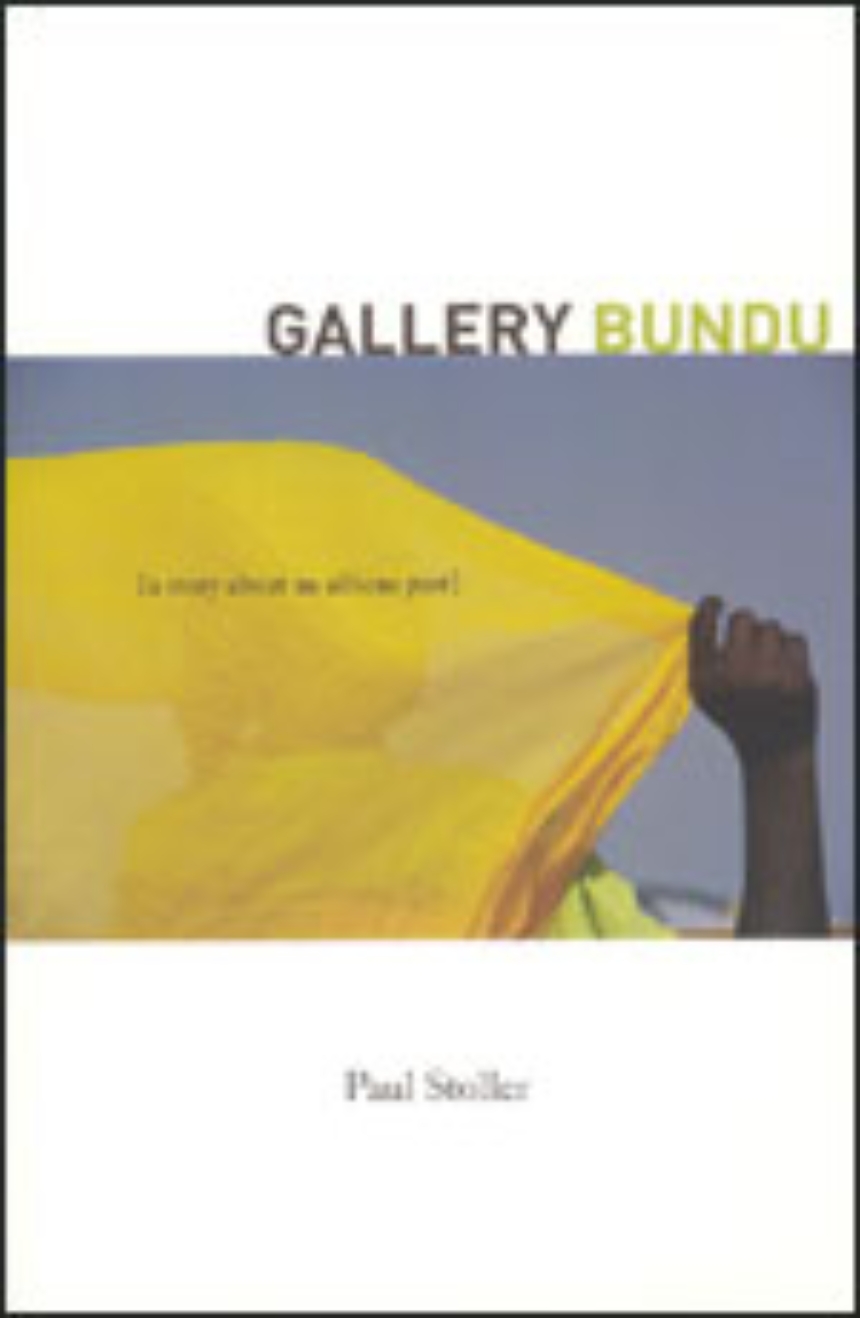 A Story about an African Past

A Story about an African Past

There comes a time for most of us when we knowingly face a decision of such consequence that it will drastically affect the shape of our lives. Some people are prepared to carry the weight of that decision. David Lyons, the protagonist of Gallery Bundu, was not.

In Paul Stoller’s work of fiction framed by African storytelling, David is the 52-year-old co-owner of Gallery Bundu, an African art shop in New York City. As a young man in the late 1960s, he joined the Peace Corps to avoid the draft. Assigned to teach English in Niger, he was eager to seek out adventure, and he found it—from drugged-out American expatriates and mamba-filled forests to seductive African women. In the course of his stay in Niger, David meets and falls in love with Zeinabou, a strikingly beautiful woman who professes her love to him, though David believes that he is not the only man she dates. Two weeks before his anticipated return to the United States, Zeinabou informs David that she is pregnant with what she believes is his child. Not knowing how to react, David flees Niger and returns to America ridden with guilt. The hastiness of David’s decision will shadow his every move for the rest of his life and will lead him to eventually return to Niger and try to make amends.

Beautifully written and deeply felt, Gallery Bundu is a cautionary tale about the impulses of youth and the unyielding grip of regret. Stoller’s vivid language and style allow readers, through David’s recollections, to touch, taste, and smell the sensations of West Africa—the tasty aroma of a traditional African fish stew, the spectacle of witches, and the humorous and often frightening experiences of traveling in the bush. A lyrical novel of decisions and destiny, Gallery Bundu is rich in character and detail, bringing anthropology to a new literary height.

"David Lyons, the narrator of Paul Stoller’s Gallery Bundu, is by turns sensitive and callow, and so disarmingly honest that his spiritual journey through a decades-long apprenticeship in African art and culture grips the reader from the first page. That David learns how to atone for a terrible mistake is a tribute to his ability to listen to the wisdom of an Africa that is also the source of his wound. His portrayal is also a tribute to the skills of Paul Stoller, who has not only ably created such a flawed and engaging character-he’s also recreated in his haunting novel the vibrant world of African life and thought."

"Ethnographer Stoller, the prolific author of several academic studies of African life and art and one other novel (Jaguar, 1999), turns again to fiction in this largely autobiographical tale of memory, longing, and regret. Gallery owner David Lyons, now middle-aged, uses the ancient storyteller’s art to weave the threads of his past into a pattern that represents his love of Niger, the people he met there, and his need to stay connected with them. In 1969, almost by chance, David, a young, draft-dodging, beer-swilling Peace Corps worker, absorbs the beauty of West Africa and learns to appreciate its land and its rich cultural heritage, especially the arts of wood carving and weaving. He also loves and leaves a beautiful local girl when she becomes pregant with his child, an act he regrets the rest of his life. Richly filled with the heat, odors, and cadences of Nigerien life, its inexorable traditions and powerful magic, this short literary novel captures the spirit of Africa and brings a small part of it back to America with its transformed narrator."

"David Lyons, the owner of the eponymous gallery of African art in New York, went to Niger in the late 1960s as an English-teaching Peace Corps volunteer. While there, he had an affair with a woman who, as he was about to leave, told him she was pregnant and the child was probably his. He left all the same but salved his conscience by sending periodic payments to the woman and child. Now, as a successful middle-aged businessman, David goes back to Africa, looking for the two people he walked out on. While there, he picks up the weaving he had learned in the country a generation earlier, a pastime that has new meaning for him: ’I now realized that I had been blind to the central truth of weaving: one wove to remake a world that is continuously torn apart by jealousy, resentment, and bad faith.’"

"Beautifully written and deeply felt, Gallery Bundu is a cautionary tale about the impulses of youth and the unyielding grip of regret. Stoller’s vivid language and style allow readers, through David’s recollections, to touch, taste, and smell the sensations of West Africa. . . . A lyrical novel of decisions and destiny, Gallery Bundu is rich in character and detail, bringing anthropology to a new literary height."

"Throughout this passionate novel, we rediscovered the flavors, the surprises, the wealth, the adventure, the magic of Africa, magnified by a writer who knows it well and who surely loves it sincerely and deeply."

"Readers will like this book, not just for its simple novel form, but for its significance as literature that explores storytelling as a method of analysis of the material as well as the visual culture of Africa. . . . This book makes an interesting read and is highly recommended for those interested in African material and visual culture. It is a good introduction to the study of African art and is recommended for anyone interested in the Songhai people."