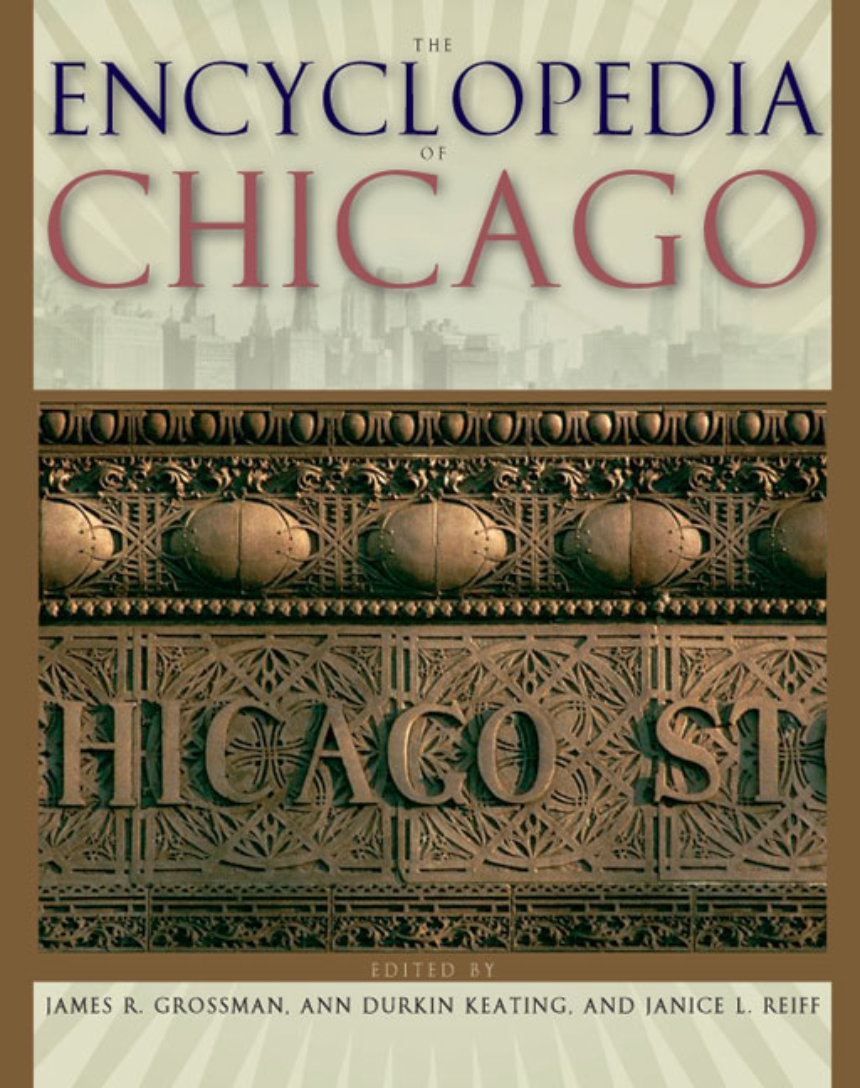 The Encyclopedia of Chicago

The Encyclopedia of Chicago

One of the great American metropolises, Chicago rises out of the prairie in the heart of the country, buffeted by winds coming off the plains and cooled by the waters of the inland sea of Lake Michigan. Chicago is a city of size and mass, the cradle of modern architecture, the freight hub of the nation, a city built on slaughterhouses and cacophonous financial trading tempered by some of the finest cultural institutions in the world. While many histories have been written of the city, none can claim the scope and breadth of the long-awaited Encyclopedia of Chicago.

Developed by the Newberry Library with the cooperation of the Chicago Historical Society, The Encyclopedia of Chicago is the definitive historical reference on metropolitan Chicago. More than a decade in the making, the Encyclopedia brings together hundreds of historians, journalists, and experts on everything from airlines to Zoroastrians to explore all aspects of the rich world of Chicagoland, from its geological prehistory to the present.

The main alphabetical section of the Encyclopedia, comprising more than 1,400 entries, covers the full range of Chicago’s neighborhoods, suburbs, and ethnic groups, as well as the city’s cultural institutions, technology and science, architecture, religions, immigration, transportation, business history, labor, music, health and medicine, and hundreds of other topics. The Encyclopedia has the widest geographical reach of any city encyclopedia of its kind, encompassing eight of the region’s counties, including suburbs. Nearly 400 thumbnail maps pinpoint Chicago neighborhoods and suburban municipalities; these maps are complemented by hundreds of black-and-white and color photographs and thematic maps that bring the history of metropolitan Chicago to life. Additionally, contributors have provided lengthy interpretive essays—woven into the alphabetical section but set off graphically—that take a long view of such topics as the built environment, literary images of Chicago, and the city’s often legendary and passionate sports culture.

The Encyclopedia also offers a comprehensive biographical dictionary of more than 2,000 individuals important to Chicago history and a detailed listing of approximately 250 of the city’s historically significant business enterprises. A color insert features a timeline of Chicago history and photo essays exploring nine pivotal years in this history.

The Encyclopedia of Chicago is one of the most significant historical projects undertaken in the last twenty years, and it has everything in it to engage the most curious historian as well as settle the most boisterous barroom dispute. If you think you know how Chicago got its name, if you have always wondered how the Chicago Fire actually started and how it spread, if you have ever marveled at the Sears Tower or the reversal of the Chicago River—if you have affection, admiration, and appreciation for this City of the Big Shoulders, this Wild Onion, this Urbs in Horto, then The Encyclopedia of Chicago is for you.

"The Encyclopedia of Chicago is no mere collection of fun facts. It is a work of stunning scholarly achievement. . . . [It] is easily the most comprehensive reference book on the Chicago region ever published. To find a work that even remotely rivals it in daring and scope, one must return to 1886 when A.T. Andreas produced his hodgepodge and highly eccentric three-volume History of Chicago. Developed by the distinguished Newberry Library in cooperation with the Chicago Historical Society, the 1,117-page Encyclopedia of Chicago features more than 1,400 entries by more than 600 historians, journalists and other experts, in addition to hundreds of maps and illustrations, a dictionary of Chicago-area businesses, a biographical dictionary and a 21-page timeline. . . . This is a work of depth and gravity, written largely by scholars but aimed at the intelligent regular Joe, an approach that becomes self-evident in the first ten pages."

"The motto of any worthy encyclopedia ought to be that byword of Sgt. Joe Friday, ’Just the facts, ma’am,’ and in as lucid a manner as you can deliver them. This The Encyclopedia of Chicago does indeed deliver, and consummately well. It also delivers excellent maps and carefully chosen, unobtrusively placed photographs. . . . I hope this doesn’t get around, but Chicago is just now one of the best cities in the world, lively and beautiful and happily youthful in spirit."

"I also love that you can open this book to pretty much any page and find something incredibly interesting. This is a great coffee-table book--and I don’t mean that in a disparaging way at all. I just think it’s a book you leave within reach for a long time. It sits on my reading desk, and every so often I open it randomly and read. I love that I never know what I’m going to find. There is a charmingly eccentric pattern, or, more accurately, lack of pattern, to the topics you encounter. It’s not a predictable encyclopedia."

"After a couple of hours of playing ’stump the encyclopedia’—a game in which you try to prove you know more than the editors—I found myself wholly impressed by this prodigious effort. . . . The contributors’ accessible scholarship has its feet planted firmly at State and Madison (see planning of grid system) rather than high in the ivory tower (see University of Chicago). It is also refreshing that the editors acknowledge the interdependence of the city and the greater metropolitan area."

"The Encyclopedia of Chicago can be approached in a million or so different ways. . . . It is unimaginable that it will not thrill, frustrate, surprise, inspire, amuse, confound, enlighten and entertain anyone who picks it up. It is much like the city it seeks to capture in 1,100 or so pages: . . . There is not, cannot be, the definitive story of Chicago, for it is being written as you are reading this. The Encyclopedia of Chicago will have to do, and it does so in a way that will quietly amuse you."

"Here is a truly formidable document: 1,152 pages of tragedy, comedy, and farce. Beginning with abolitionism and ending with Zenith Radio Corporation, it’s perfect for the history buff with an appreciation for human frailty."

"In our ideal reference world, there would be an encyclopedia like this one for every great American city. This is a superb ready-reference work on Chicago, a good starting point for students doing research, and just a wonderful book to browse through."