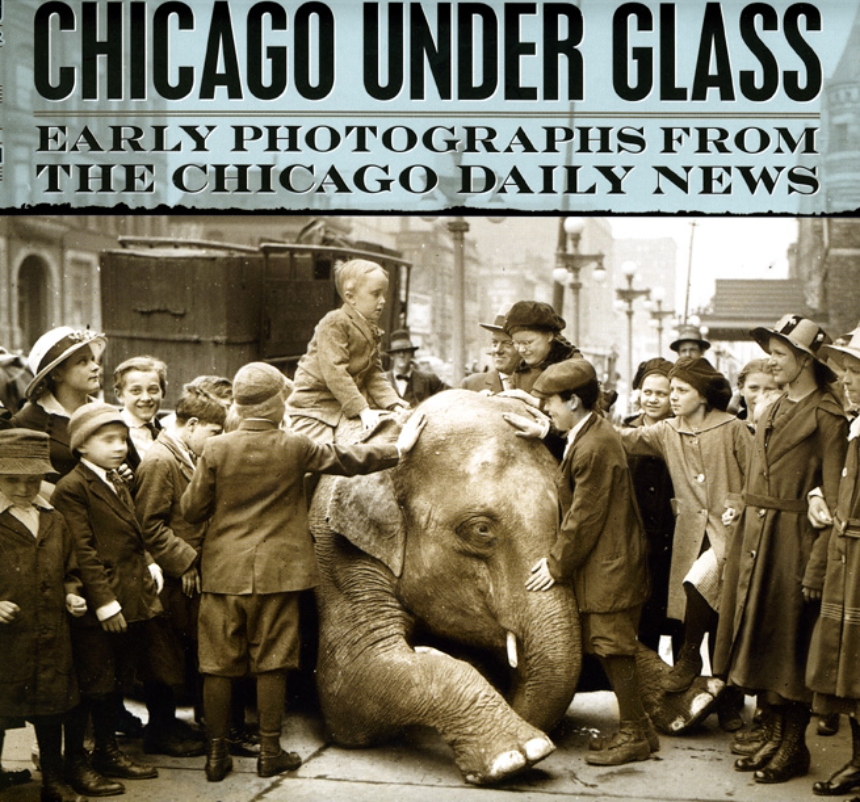 With a Foreword by Rick Kogan
When the Chicago Daily News closed its doors in March 1978 after over a century of publication, the city mourned the loss of an American original. The Daily News boasted the inventive, aggressive writing of such luminaries as Carl Sandburg and Ben Hecht. It was also one of the first newspapers in the country to feature black-and-white photography. In 1900, staffers from the paper’s art department began lugging bulky cameras, heavy glass plates, and explosive flash powder throughout the city. A labor strike, a boxing match, or a crime scene—it was all in a day’s work for the Daily News photographer.
These cameramen helped sell papers, but, as Mark Jacob and Richard Cahan reveal, they also made art. Chicago under Glass: Early Photographs from the Chicago Daily News is the first collection of images from the photo staff’s early years, 1901 to 1930. Jacob and Cahan, seasoned journalists themselves, have selected more than 250 images—many of which have never before been published—from the nearly 57,000 glass negatives housed at the Chicago History Museum. They include rare photographs of a young Buster Keaton with his wife and child, waiting to board a train and the notorious Al Capone outside a courtroom, smoking a cigar and consulting with his lawyer. Each thematic section begins with a fascinating introduction by the authors, and each image is accompanied by insightful historical commentary.
These fragile glass records are a remarkable piece of American history. Together, they capture a time of massive change and stark contrasts, the defining years in a place Nelson Algren called “Hustlertown.” From candid shots of the Eastland steamer disaster to the glittering electric lights of the White City amusement park and the grim aftermath of the Saint Valentine’s Day Massacre, the history these images reveal is not simply the story of Chicago, but the history of the modern American city.

“Chicago Under Glass is visual history at its best. Jacob and Cahan offer a menu of Chicago’s famous and forgotten, from Al Capone and Jane Addams to street kids and spouse killers, from the Palmer Castle to the ‘death corner.’ This smorgasbord of photography documents the age when cobblestones gave way to asphalt, when horses were replaced by cars, and Chicago witnessed the creation of icons like Buckingham Fountain, Soldier Field and Navy Pier. This is required reading for anyone interested in twentieth-century America, a must for those who love Chicago.”

“Mark Jacob and Richard Cahan have done a splendid job of exploring the Chicago History Museum’s enormous trove of Daily News glass negatives and selecting dozens of its treasures for arresting display in this book. The first three decades of the twentieth century marked the emergence of photojournalism, and the Daily News archive provides as fine an eyewitness as exists of the development of the modern city. Jacob and Cahan’s detailed commentaries are as informative as the images themselves, and together the text and images provide an invaluable resource and wonderful reading for anyone interested in Chicago and urban history.”

“A lost world. . . . We know this place because we’ve seen such pictures before. But we only imagine we’ve been there. . . . The writing in this famously literary paper is largely lost, but the photography survives, and now an anonymous photographer’s strange, wonderful picture of a group of blind children stroking a circus elephant deservedly finds a spotlight as the cover of Chicago Under Glass. It’s a fitting introduction to the book, expressing the idea of reaching out to touch something most alive in the imagination.”

“Worth the asking price based on the mustaches alone. . . there are some true relics of Chicago history in here that the photos instantly bring to life. There’s a dynamic two-page spread showing Billy Sunday—a former baseball player turned Presbyterian minister—hollering to the high heavens. Another, spookier shot, shows the dead body of Russian immigrant Lazarus Averbuch seated in a chair, with police captain Michael Evans holding up his head. Averbuch was killed by a police officer under suspicious circumstances in 1908. But our favorite is the photo that accompanies the title page to Chapter Seven: Politicos and Preachers. Its caption says it all: ‘Alderman wrestling bear.’ That’s literal, folks.”

“Tens of thousands of glass-plate negatives from the defunct Chicago Daily News serve as glimpses into a lost world. . . . Chicago under Glass depicts a gritty burg evolving through cultural upheavals and technological advances. Some of the buildings and vistas look vaguely familiar today, but the fashions and hairstyles surely don’t. . . . Fascinating.”

“Chicago history circa 1901-30, with its triumphs, disasters, and celebrities, comes alive through the lenses of Daily News photographers in this expansive treatment by Mark Jacob and Richard Cahan. . . . Makes the familiar fascinatingly strange.”

“Most institutional archives contain historic photographs that the passage of time has turned into objects of wonder. Mark Jacob and Richard Cahan have uncovered a bundle in Chicago under Glass. Images that began their lives as nothing more than photo-ops—an alderman wrestling a bear, men playing indoor baseball, or policemen standing on a street corner in 1926 next to a recent invention, the traffic light—are slowly acquiring a patina that will only make them more curious and hard to distinguish from art.”

“Here is a book made to order for all who love Chicago photography, history, sports, politics—you name it. . . . An important book, hard to put down and a splendid read. Did I hear someone say Pulitzer?”

“The book showcases the work of Chicago Daily News photographers in the early 1900s, when photos still were a new feature in newspapers. The cameras were bulky and awkward, but this first generation of photojournalists recorded pictures of Chicago’s most famous and powerful people, scenes of rioting and mayhem and oddities like a boy lying inside an experimental pneumatic tube. . . . Breathtaking. . . . Seeing the images now feels like peering through some sort of time machine.”

Readings and References
Illustration credits
Index
Back to top