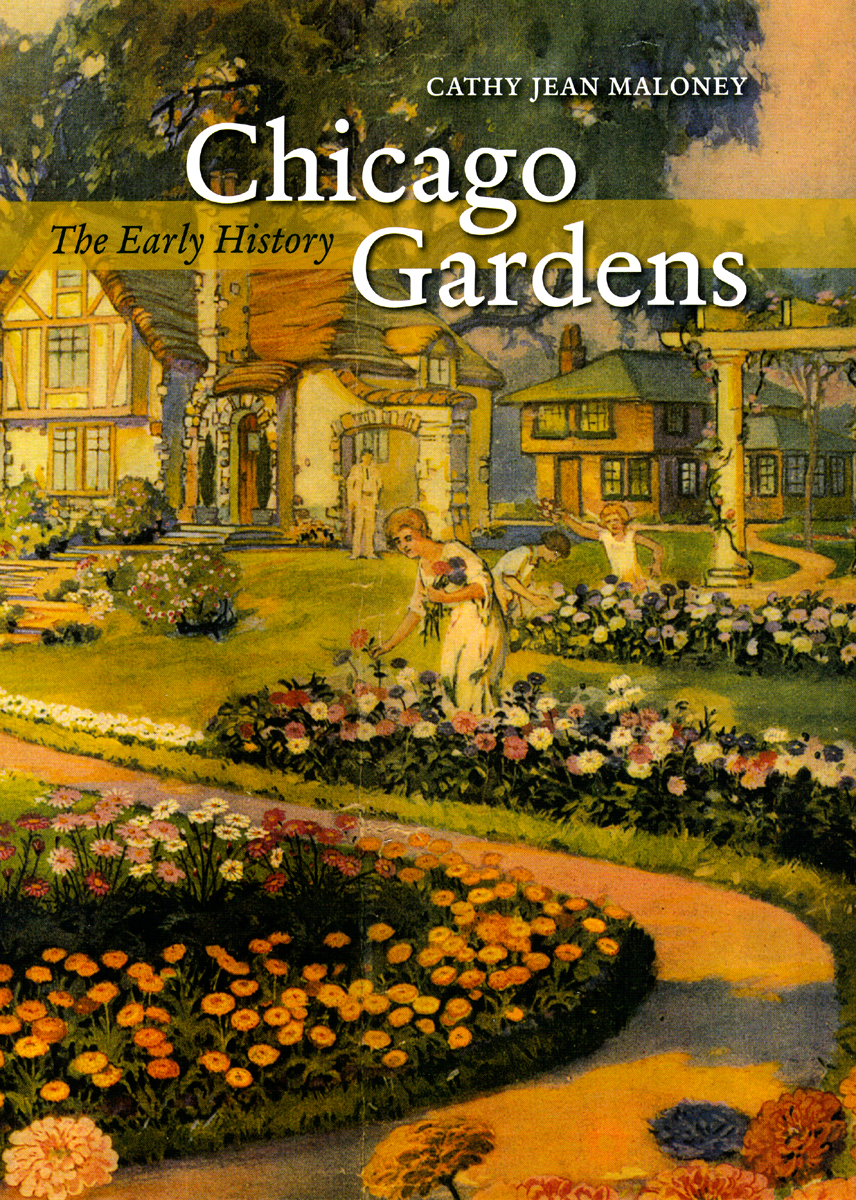 from Chicago Gardens: The Early History

Very few, if any, early Chicago area gardens remain in their original design. Plants die and are replaced, styles change, and properties themselves are divided. Even fewer properties are open to the public. Those that are described below contain bits and pieces of heritage landscapes, both residential and public.

Where else would you find a bear’s cage, alligator pool, Japanese garden, windmill, greenhouses full of flowers, grottoes, acres of gardens, deer paddock, Indian statue, working quarry, cannons, and Greco-Roman swimming pool? At Riverbank, the riverside estate of George and Nelle Fabyan, all this and more once existed. Scientific farms were a trend in the early 1900s. In the first decade of the twentieth century, moneyed gentlemen farmers enjoyed experimenting with new ways of raising livestock and growing crops. Their estates offered interesting examples of landscape design as well as insight into the food markets and technology of the day. On Chicago’s North Shore, a number of estates featured experimental farming or animal husbandry, including Samuel Insull’s Hawthorne Farms, J. Ogden Armour’s Mellody Farm, and Arthur Meeker’s model dairy at Arcady Farm. George and Nelle Fabyan, with highly eclectic interests, had perhaps one of the most diverse landscapes, and one of the most interesting, too.

Businessman George Fabyan and his wife, Nelle, bought ten acres of farmland along the Fox River in 1905, and expanded the property over the next three decades to nearly six hundred acres, one of the largest self-sufficient estates west of Chicago. Riverbank includes the family home, Fabyan Villa, its grounds and outbuildings, and a research center across the street. Colonel Fabyan was born into a wealthy Boston family and, in 1903, moved to Chicago to head the Midwest branch of the family cotton textile business. He and Nelle Wright Fabyan, married in 1890, each brought passion and dedication to many individual pursuits, and their far-flung interests are equally represented in this crazy-quilt landscape of curiosities and wonders.

Fabyan Villa, the original farmhouse remodeled over the years with input from Frank Lloyd Wright, sits near the road at the top of a long, sloping hill that descends to the Fox River. Stretching from north to south along both sides of the river, individual gardens, outbuildings, and follies dotted the landscape. Unlike the manicured estates of the North Shore, which typically unfolded under the master planning of a prestigious individual landscape architect or firm, Riverbank grew through the years, with additions and influences from its many employees, and the exotic interests of its owners.

Gardening traditions from many countries were represented at Riverbank. George Fabyan hired U.S. Department of Agriculture staff member Charles McCauley, an Irishman, to oversee the estate’s horticultural interests; native Czechoslovakian Louis Kostel to manage the south greenhouse; and Susumu Kobayashi, Japanese gardener. Also in this mini-league of nations were a resident sculptor, Italian Silvio Silvestri, who created many of the garden ornaments; German Theodore Matthews, who headed the farm operations; and Norwegian Jack Wilhemson, who, in addition to managing the boathouse and water needs of the estate, used his nautical expertise to fashion a garden folly: a fourteen-foot rope spiderweb between two large elm trees.

There are so many points of interest at Riverbank, it’s perhaps useful to study the estate in sections, as suggested by the map printed here. This map shows Riverbank as it might have been in the 1920s, as recollected by former workers and local villagers. The east portion of the estate (above the river), is bisected from east to west by Middle Road. The upper (westernmost) part of the estate near the road contained the Fabyan residence called the Villa. Near the home, Nelle Fabyan planted flowers in old-fashioned lawn cutouts of stars, crescents, and other shapes. One of the most impressive surviving landscape features, the rose arbor led from the bottom of the slope at the rear of the home down to the river. The arbor was planted with roses and featured a large sundial mounted on a pedestal. North of this arbor was a series of greenhouses. Torn down in the 1920s, this was but one of two sets of production glasshouses Fabyan had built. The greenhouses, vegetable gardens, and peony fields provided flowers and food for the family, and commercial crops sold in Chicago.

Through an elaborate gate, the arbor leads to a bridge that crosses the river to an island where once a large Greco-Roman swimming pool stood. Across the river on the eastern portion of the estate, Fabyan built a Bavarian beer garden during Prohibition for the entertainment of his workmen and local community, and installed an octagonal, sixty-eight-foot-high windmill. Fabyan milled a variety of grains farmed on his estate. Listed on the National Register of Historic Places in 1977, the windmill was relocated from nearby York Center to Riverbank in 1914, and reconstructed at great cost.

In the middle of the estate, the Fabyans’ Japanese garden takes center stage. Built between 1910 and 1914, the restored garden was originally designed by Taro Otsuka from D. Hill nursery in Dundee. Surrounded by a simple wooden fence, the garden then, as now, had four garden gates, one at each point of the compass. The western gate is a Shinto-inspired Torii gateway, the traditional symbol of a nearby shrine. Concrete lanterns were created for the garden by Silvio Silvestri. The garden includes plantings, an arched bridge, and water features characteristic of Japanese gardens. The inspiration for the garden may have been Colonel Fabyan’s role in a 1905 peace negotiating team during the Russo-Japanese War, coupled with the novelty of Japanese gardens sweeping America during the period.

Near the Japanese garden are several smaller gardens and follies of note. A bear cage remains just southwest of the garden, one of many animal displays that the Fabyans favored. At one time, alligators were kept in a pool just east of the bear cage, and other cages or pens on the estate contained exotic birds, pheasants, a kangaroo, monkeys, ostriches, and more. Slightly northwest of the Japanese garden near the restored flagpole were two formal gardens, the Centennial and Susquehanna gardens, which showcased a wide variety of flowers. Two grotto gardens once graced the landscape. One, whose remains can still be seen, was built north of the estate’s boathouse and used fossil stone imported from Florida. Another was built into the hill close to the villa and was planted with ferns and shade plants.

Across the main road (now Route 31) is Riverbank Laboratories. This was George Fabyan’s think tank. Fabyan was interested in such diverse subjects as plant genetics, animal husbandry, health, and physical fitness. Especially during wartime, his patriotism and interest in military strategies, acoustics, and encryption employed scientists full time at the laboratories.

Riverbank was often the height of social activity. The Fabyans were quite generous with their property, and allowed local residents to stroll the grounds. Fabyan, a patriotic man, permitted military practice maneuvers during the war. Although many structures are missing, it is quite easy to imagine the amazing landscape diversity this property once held.

Several groups are actively involved in maintaining Riverbank today. The Kane County Forest Preserve District acquired the property in 1939, and is responsible for maintaining the grounds. The Friends of Fabyan, a volunteer group, is dedicated to preservation, restoration, and education on the legacy of George and Nelle Fabyan.

Although many of the outbuildings have been removed (greenhouses, the alligator pit, swimming pools, etc.), the remnant landscapes still hint at the former glory of this estate. The Japanese garden has been rehabilitated by the county and Geneva Garden Club, and more work is planned. The rose arbor is also being restored and still runs from below the villa to the river. Various outbuildings have been repurposed into shelters (the bear cage and boathouse). The Japanese garden and some areas around the house are planted, but other vast formal gardens no longer remain. Yet 245 acres purchased by the county in 1939 remains, and the spatial relationships among important garden features still suggest the original extent of the landscape.

For information on purchasing the book—from bookstores or here online—please go to the webpage for Chicago Gardens: The Early History.